Malala Yousafzai joins Twitter to global fanfare and Pakistan censure | Asia| An in-depth look at news from across the continent | DW | 08.07.2017

Nobel peace laureate Malala Yousafzai has joined Twitter and within a day the activist gained over 500,000 followers. While welcomed by global leaders, many Twitter users from her home nation chose to deride her. 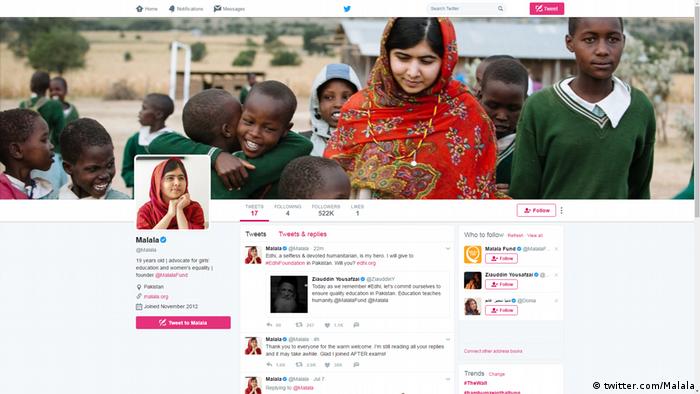 "Today is my last day of school and my first day on @Twitter," Malala Yousafzai wrote on her newly opened account, which gained more than 134,000 followers in three hours.

Malala, who will turn 20 this month, had been attending school in the UK, where she had been living since she was shot by Islamist militants in Pakistan's Swat area in 2012.

On July 7, the day she joined the micro-blogging site, Malala called on support for girls' education worldwide. A day later, she had over 500,000 followers, which include world leaders and international celebrities.

"I welcome @Malala to Twitter, where she will bring her unique dedication and inspiration on behalf of girls' education," wrote Antonio Guterres, secretary-general of the United Nations.

"Your bravery and commitment to education – both yours & others – is inspiring. Congratulations on graduating high school @Malala!"

Philanthropist Bill Gates too admitted he was a fan of the Pakistani teenager.

"You continue to inspire me, @Malala. Thanks to you, young women around the world can dream of a brighter future for themselves," Gates wrote on Twitter.

Twitter itself welcomed Malala to its platform with a simple "Welcome @Malala!"

The 19-year-old activist was shot by militants in October 2012 in the Swat Valley of Pakistan's restive Khyber Pakhtunkhwa province. Taliban militants claimed responsibility for the attack and said in a statement that Malala had been attacked for promoting "secularism" in the country. After receiving initial medical treatment in Pakistan, Malala was sent to the United Kingdom where she is presently residing with her family.

Before being shot, the teenager had been campaigning for girls' right to education in Swat and was a vocal critic of Islamic extremists. She was praised internationally for writing about the Taliban atrocities in a BBC Urdu service blog.

Malala has come a long way since then. She has now become an international icon of resistance, empowerment of women and right to education, and has received numerous awards, including the European Union's prestigious Sakharov human rights prize. The teenager was also awarded the Nobel Peace Prize in 2014. However, in her own country, she is looked down upon by many, who accuse her of being a US agent, set out to malign Pakistan and Islam.

While Twitter users from all over the world poured out their love for Malala, those from her home country were not as considerate.

"Malala a dollar girl fight for dollars [sic]," wrote Imran Khan, a Twitter user from Pakistan, in response to the activist's tweet: "Each girl's story is unique – and girls' voices are our most powerful weapons in the fight for education and equality [sic]."

"What u did except media talks & nationalities fr ur family. Ur dream hs been achived now enjoy the cmpany of ur directors [sic]," Twitter user Adnan Malik wrote.

"There r many competent girls in same area who didnt get any appraisal. Why only Malala? She has been launched for a reason [sic]," wrote another Twitter user from Pakistan.

Despite the fact that liberals hail Malala as a symbol of pride for the country, she has become an extremely divisive figure in Pakistan. A majority of conservatives allege she is working against Islam and Pakistan's sovereignty. Some in Pakistan claim that the teenager was actually never shot by the Taliban.

"Isn't it strange that many Pakistanis share the Taliban's views on Malala?" said Shareef Ahmed, a Karachi-based peace activist. "I think it shows that the Taliban ideology is popular in the country. Malala has exposed quite a lot of people, even those who are not hardcore extremists."

Many in Pakistan believe that local and international media are unnecessarily creating hype around the young activist. Right-wing parties in the South Asian nation claim that the "campaign" to promote Malala is proof that there is an "international lobby" behind the whole issue.

"I don't think that Malala deserved the Nobel Peace Prize. I think there were more deserving people in Pakistan who should have been given the award," Karachi-based Shiite activist Syed Ali Mujtaba Zaidi told DW. "Just because she [Malala] got shot by the Taliban does not make her worthy of these prizes," he added. 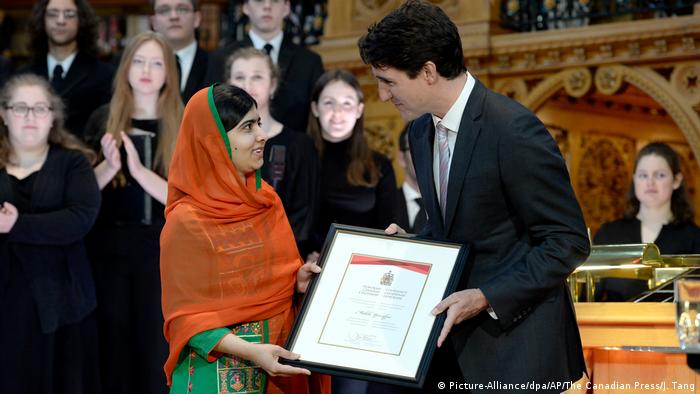 Can Malala return to Pakistan?

Supporters of the 19-year-old say that the "Malala haters" are running a smear campaign against the teenager. They argue that until the mindset of the people is changed, Malala's return to Pakistan is almost impossible.

"Malala has been portrayed as a western agent in Pakistan - a country brimming with anti-West sentiment. Anyone seen as pro-West in the country becomes a target for scorn, ridicule, hatred, and even violence," Farooq Sulehria, a London-based Pakistani activist and researcher, told DW, adding that the country's progressive section was too weak and fragmented to ensure Malala's safety.

Sabin Agha, a Karachi-based documentary filmmaker, insists the issue is not just about Malala but the overall situation of women's rights in the South Asian nation.

"Isn't it ironic that Pakistan is considered a safe place for national and international terrorists but not for its own female population?" Agha said. "We have to change this scenario, and also the patriarchal mindset which supports violence against women."

Despite negative comments on Twitter, many Pakistanis expressed their solidarity with the activist and supported her work.

Malala Yousafzai as the youngest Messenger of Peace

Malala documentary opens in the US

In 2012 the Taliban attempted to assassinate Malala Yousafzai for her outspoken advocacy of women's education. "He Named me Malala," a documentary telling the Nobel Peace Prize winner's story, has opened in US cinemas. (02.10.2015)