The German contribution to the 2016 Architecture Biennale in Venice aims to send a political message: This is a country of immigrants. How does a culture of openness translate into architecture? 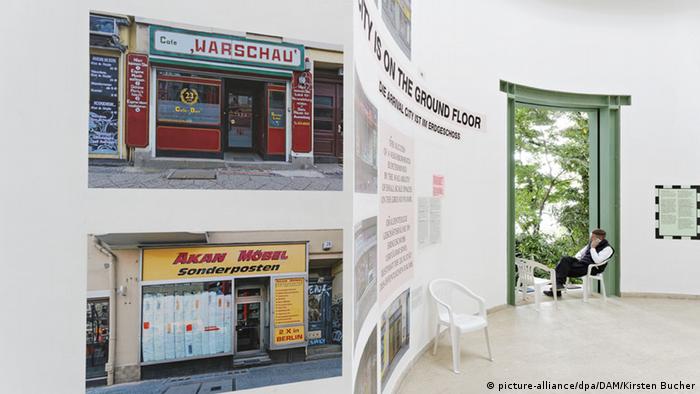 Large and airy with only minimal furnishings - just a few white plastic outdoor chairs are scattered around the room: This is how the German Pavilion welcomes its visitors at the 2016 Architecture Biennale in Venice.

A makeshift information desk has been created out of wooden palettes filled with rubble stones. Jute bags, books and other trinkets are for sale there, too. Most noticeably, there is a light that shines into the building, a breath of wind constantly rushing into the room.

The look is reminiscent of what one might experience at a train station's reception hall, a transitory place where you can come and go or stay as you please. Openness is on the agenda. That's why four large openings have been broken into the walls of the building that stands under protected status. 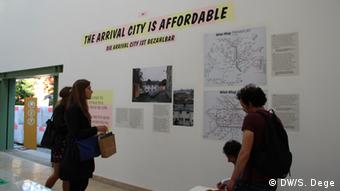 The combination of texts and photos is a bit overly cerebral

The goals of this project, called "Making Heimat. Germany, Arrival Country," were set a while ago. Peter Cachola Schmal, director of the German Architecture Museum in Frankfurt and General Commissioner of the German Pavilion, worked with Oliver Elser and Anna Scheuermann as curators to prove the thesis that Germany has long been a country of immigrants. They believe arrival needs to be made easier for new immigrants: The exhibit is a wink and nod to architects and city planners as well as, or perhaps foremost, to politicians.

Just how torn apart Germany would be as a result of the refugee question was not something the curators expected. After more than a million people arrived in Germany in 2015, the nation's landscape shifted. Since then, the political right has been strengthened, borders are going up again and the notion of a welcoming culture has become history.

Fast-paced developments that have occurred in recent months have made it difficult for the curators. Still, they defiantly claim, their statement remains more necessary than ever. 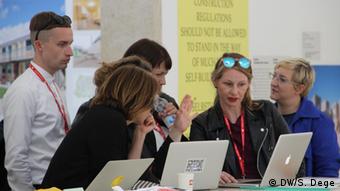 The curators of the German Pavilion at work

A garden filled with old trees leads to the entrance of the German Pavilion, set up in an old building which gained severity through its renovation in 1938, during the Nazi era, under Ernst Haiger. Bring plenty of time for a visit: The curators have put together an exhibit bound to provoke thinking.

The sparse, factory-like presentation is split into three parts. Hand lettering, texts and photos are taped on the walls without adornment, exploring eight theses on the country of arrival.

"The Arrival City," as one of the core sentences states, "is a city within a city." Whether in Hamburg, Stuttgart, Frankfurt or Cologne, many cities have neighborhoods in which a large percentage of foreigners live and which have become known as "problem areas." Still, these areas have much to offer for those newly arrived immigrants to build a new community: cheap housing, jobs, small industry spaces, good public transit connections, a network of people from their native countries - and a culture of tolerance.

Schmal and his team are trying to put a new light on Germany's immigrant communities, building on the work of the Canadian journalist Doug Saunders, who visited 30 mega-cities around the globe to research the conditions of migration for his book, "Arrival City." Saunders' motto: "Migration in cities is not something to be viewed as a blight on civilization but as a step forward." 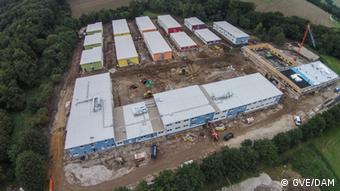 Reception center for refugees in Essen

Just where immigrants should live and how they will live together with Germans in the future remains to be seen.

Lessons can be learned from the city of Offenbach, a prototype of the German arrival city. One of the rooms of the German Pavilion gathers short portraits featuring people who have "made it" there - people whose mothers, fathers or grandparents came to the country as foreigners.

One picture shows the café owner Osman Göverim, who has Turkish roots and outs himself as a Star Wars fan. Another portrait is of the Popescu family from Moldavia. "We invest as much as we can in our children," says father Dimitru, who works as a truck driver. Arthur Seitz is not to be missed: The former custodian from Hermann-Steinhäuser-Street is pictured in a gray tunic and brown corduroy cap. He says he has seen a lot in his 80 years. "I'm happy with my people," he says in a dialect, "And them with me."

"Offenbach," the motto of these people seems to go, "is okay!" 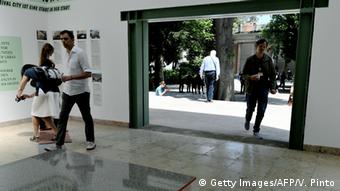 Breaking down walls at Germany's Pavilion

Many newly arrived are initially accommodated in reception centers and collective living quarters, places which have cropped up throughout Germany in recent months - seemingly out of nowhere. That's why Peter Cachola Schmal's team of curators have also taken a look at the quality of the housing built for refugees.

A growing number of designs and project reports have been gathered into a public database, makingheimat.de, which aims to inspire cities and communities for their own projects. Biennale visitors are invited to discover some of the most stunning examples as well.

There's a lot to take in at the German Pavilion at the Architecture Biennale 2016. This year's director, Chilean architect Alejandro Aravena, has called on participants for "Reporting from the Front."

The German curators have offered their own interpretation of this motif through their exhibition on immigration, arrival cities, and building for refugees.

For those who can never get enough of theory, there is lots to be read as a follow-up; the publisher Hatje Cantz has produced a bound catalog to accompany the exhibition.

In the meantime, a fresh wind is blowing through the opening in the wall at the German Pavilion, a hole which reveals a view of the lagoon and the Vaporettos bobbing in the canals. With some luck, Germany's Biennale entry could bring back home that same fresh wind into the refugee debate.

Social and environmental problems are forcing a change in thinking, including in architecture. This edition of the Venice Architecture Biennale aims to open new perspectives and expand horizons. (30.05.2016)

Refugees and integration are the central themes for the German Pavilion this year. The exhibition “Making Heimat” addresses the subject of an ideal place of arrival for refugees, and shows how architecture is responding. (30.05.2016)