Migration expert Doug Saunders on the potential of the 'Arrival City'

Millions of people are migrating to cities the world over in search of a better life. Journalist Doug Saunders takes a look at this movement and promotes his theories of migration in his book "Arrival City."

At first sight, Doug Saunders, 49, comes across as a stern, severe and rather reserved person, almost a bit stiff. But once the conversation gets going, he warms up. And as soon as his big topic is being discussed – the arrival cities of migrants – he even smiles.

Doug Saunders, born in 1967 in Toronto is "The Globe and Mail" newspaper's Europe correspondent. He's received the National Newspaper Award - the counterpart of the Pulitzer Prize - four times, and his first book "Arrival City," received the Donner Prize and was nominated for several others.

Research in slums, favelas and in Berlin-Kreuzberg

While conducting research for his book "Arrival City" published in 2011, the British-Canadian journalist traveled around the world, visiting the outskirts of 30 mega-cities, among them Brazilian favelas, slums in India and African capitals, as well as the Turkish "gecekondu," which literally translates as buildings "put up overnight." 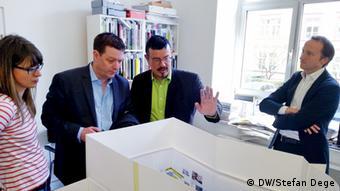 Other stops during his three-year research trip were London's East End, the notorious banlieues of Paris and the Kreuzberg district of Berlin. Saunders talked to people while observing their lives. He linked his impressions to scientific analyses, and even raised political demands.

And finally, Saunders came up with his daring theory, which says that migration to cities should not be seen as a frightening side-effect of civilization, but rather viewed as progress. In the five years since its publication, "Arrival City" has become a milestone in literature about migration, making Doug Saunders a migration expert.

The locations that Saunders visited all have one thing in common: they are "arrival cities." Roughly one-third of the world population is moving from rural areas into cities, crossing provinces, countries and entire continents. At the moment, there are more people are living in cities than in the countryside.

Whether or not such migrations work out successfully has nothing to do with cultural or religious factors, Saunders claims. The migrants all tend to be attracted to the same destinations, no matter which country they may originate from. But whether or not they find work, are able to build up social networks, and manage to send their children to school depends on how well these cities are prepared to receive them. So in Saunders' view, it's all up to them, it seems.

This is how integration works

Saunders' theory about the "Arrival City" has stirred up a lot of interest as, for a long time, governments, city planners and architects thought differently. Especially in developing countries, many efforts went into trying to prevent the flight from rural areas - oftentimes in vain. For it is hard to stop people, Saunders argues, as they tend to move to those places that are comparatively cheap to live in. Once they've arrived at their destination, the migrants tend to form social networks. They work, open up new shops, or businesses - without a lot of bureaucracy involved.

Arrival cities serve as the bridge between the migrants' original homes and their final stops. Newly formed social networks replace the security once offered by the extended families, which may have benn lost in the course of the migration process. Latecomers are usually welcomed with ease into these new networks.

According to Saunders, these arrival cities provide a stepping stone which enable migrants to climb up the social ladder. A huge shadow economy with informal labor conditions and marginalized illegal businesses usually flourishes in the slums of many cities in the developing world before it evolves the become a central part of the local economy. According to Saunders, the shadow economy makes up for half of all jobs in Latin America, two-thirds of all jobs in India, and even 90 percent of jobs in Africa's most impoverished states. 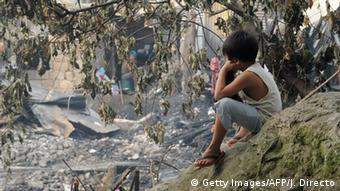 In "Arrival City," Saunders not only analyzes the dynamics of these shadow economies but also their political function. Significant developments tend to take root in such margins of mainstream society, slums and banlieues - among them the French Revolution, the overthrow of the last Shah of Persia, the rise of Turkish President Recep Tayyip Erdogan's AKP party, the triumph of Hugo Chavez in Venezuela and other such instances. Such locations, Saunders predicts, will decide the future of our well-being, especially in Europe.

Immigrants should be integrated quickly

So far, Saunders' theories on migration have mainly focused on economic migrants, but he has also given thought to war refugees who, according to him, make up no more than five percent of all migrants to Germany. He believes that most of them intend to return to their home countries as soon as possible, but also notes that some of them have come to stay.

Saunders claims that it's crucial to treat them as fully-fledged immigrants, to give them work and house them in normal neighborhoods instead of resorting to former barracks, adding that it's equally important to construct new schools for their children and to welcome them in the arrival cities in general terms. In doing so, they'll start to bring their money to the banks, invest in new property, found companies and pay taxes, and their children will go on to study at universities and fully integrate into society.

Among those inspired by the Canadian-British journalist's theories are the curators of the German pavilion at the Architecture Biennial in Venice.

A team of city planners and architects led by Peter Cachola Schmal, director of the German Architecture Museum, took Saunders' views to heart, creating the slogan "Making Heimat" (Making a home) for their contribution to the biennale. Their project is aimed at supporting the integration of immigrants.

Winner of the 2016 Pritzker Architecture Prize Alejandro Aravena sees the award as an opportunity to deal more quickly with urgent challenges. He told DW why the German refugee crisis is actually relatively small. (04.04.2016)

Where can incoming refugees be housed when they arrive and how does housing impact integration? The German pavililon will get more political than ever at this year's Venice Architecture Biennale. (10.03.2016)