The printing press was invented in Mainz, and the city is still a center of media. Find out what else it has to offer. 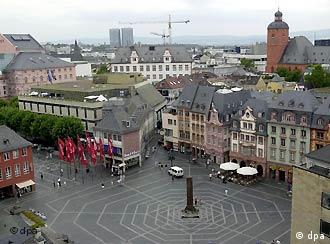 The Market Square is the heart of the city

With more than 2,000 years of history, Mainz proves that traditional and modernity can coexist and even complement each other. The university town lies at the edge of the highly populated Rhine/Main metropolitan region, which is one of the most densely populated areas in Germany.

But to the west of Mainz, not far from the city limits, the Palatinate forests begin to stretch out into a mountainous region, the Pfälzer Bergland. Since 1950, Mainz has been the capital of the German state Rhineland-Pfalz and its 200,000 inhabitants make it a middle-sized city by German means. 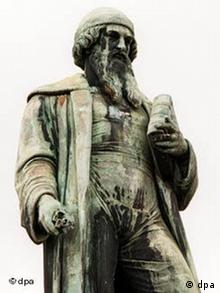 Johannes Gutenberg invented the printing press in the mid-15th century

As most of Mainz is relatively contemporary, the Old Town stands out as a highlight for visitors. Tourists come here to see the Romanesque cathedral of St. Martin, the tower of St. Stephan's Church, which is famous for its windows designed by Marc Chagall, and the Baroque red sandstone buildings stemming from the 17th century.

Tradition and progress are closely related in Mainz. The city, where once the Romans, Emperor Barbarossa and several princes and bishops resided, has developed into an important business location. More than 500 years ago, Johannes Gutenberg invented the printing press in Mainz, a medium that revolutionized the world.

Today Mainz is a media center once again: The public broadcasting station ZDF has built up a huge broadcasting center here.

State theater, opera, ballet, studio theaters and several cabarets keep boredom out and the city alive in the evening. In the state gallery, valuable works of art from all eras can be found -- from Roman discoveries to contemporary paintings. 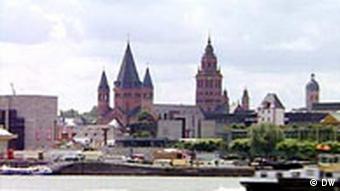 Mainz from the Rhine

Throughout the year, several major festivals take place in Mainz. In commemoration of its most famous son, Johannes Gutenberg, the people of Mainz celebrate Johannisfest, which attracts hundreds of thousands of visitors every year. The city's party atmosphere also rises during Carnival season just before Lent, when costume-clad revelers take over the streets for six days and nights.

Wine taverns instead of discos

Though Mainz is not know for wild nightlife and its clubs can be counted on one hand, it does offer a broad selection of restaurants and eateries. Especially popular are the old, rustic wine taverns in the narrow streets around the cathedral. This idyllic area of the Old Town, with its numerous half-timbered houses and many little stores also offers good shopping opportunities. Culinary tidbits and other specialties are bought best at the nostalgic weekly market on the Domplatz, the square at St. Martin's Cathedral.

Once you've explored Mainz, you may want to venture into the surrounding areas. The vineyards of the Rheingau, Rüdesheim with its famous abbeys, and Hesse's capital city of Wiesbaden just on the other side of the Rhine River are all worth a trip.

Visits to Germany's more obscure destinations are rare by foreign tourists and even locals are often deterred. In the country of autobahns, the latter might be partly to blame. (24.09.2005)

Germany Offers a Wealth of Trails -- Hiking Day or Any Day

The City of Mainz

More about Mainz, from culture to business (in English).

Follow our European adventure and participate in our giveaway to win a DW travel kit!