Palestinian President Mahmoud Abbas has postponed the first vote in over 15 years, citing uncertainty if Israel would allow the election to proceed in Jerusalem. Abbas has been the Palestinian president since 2005

The two long-standing political rivals, Fatah and Hamas, had reached an agreement to hold legislative elections on May 22 and a presidential vote on July 31.

Initially scheduled for May 22, the Palestinian election would have been the first in more than 15 years.

"The elections must be held in all the Palestinian territories, including Jerusalem," Abbas said after meeting with representatives of several Palestinian groups in Ramallah in the West Bank.

What is the Israeli stance?

Earlier this week, Israel's Foreign Ministry said that elections were "an internal Palestinian issue" that Tel Aviv had "no intention of intervening in them nor preventing."

Abbas told Palestinian political groups that Israeli officials said they could not respond on the Jerusalem issue because the Jewish state currently had no government.

Israel is already mired in one of its worst political crises in history, with no government yet formed following the inconclusive March elections.

The decision came amid escalating tensions in Jerusalem, with protests that left dozens injured after clashes between Palestinians and Israeli police.

The city has long been a flashpoint in the Israeli-Palestinian conflict.

How is the delay perceived?

The decision is likely to draw heavy domestic criticism.

Hamas, the Islamist movement ruling Gaza, rejected Abbas' decision, describing it as a "coup" with no popular support.

On Wednesday, Hamas said it "rejects any attempt to postpone the elections." But it also said it was unacceptable to hold the vote without east Jerusalem.

Protesters gathered in Ramallah ahead of Abbas' announcement, demanding that the vote be held as scheduled, Reuters reported. 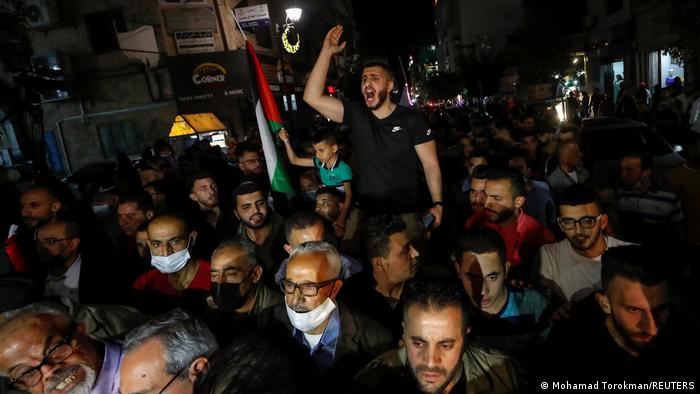 In east Jerusalem protesters took their opinion to the streets, chanting: "No elections, no voting, without Arab Jerusalem!"

Observers say delaying the elections will likely spare Abbas' party an embarrassing defeat amid public dissatisfaction with his rule.

Critics have called for a move around the Jerusalem issue, suggesting setting up ballot boxes in schools or religious sites.

The European Union's foreign policy chief Josep Borrell said the postponement was "deeply disappointing." He called for a new election date to be set "without delay."

He reiterated the EU's demand for Israel "to facilitate the holding of such elections across all of the Palestinian territory, including in east Jerusalem."

The vote was believed to be a major step towards reconciliation between rivaling Fatah and Hamas.