Madonna steals the show at Eurovision — for the wrong reasons | Culture | Arts, music and lifestyle reporting from Germany | DW | 18.05.2019

Madonna steals the show at Eurovision — for the wrong reasons

The leaked news that the Queen of Pop would perform at the Eurovision Song Contest in Tel Aviv was followed by rumors that she'd backed down. But then she gave an out-of-tune performance of her anthem "Like a Prayer." 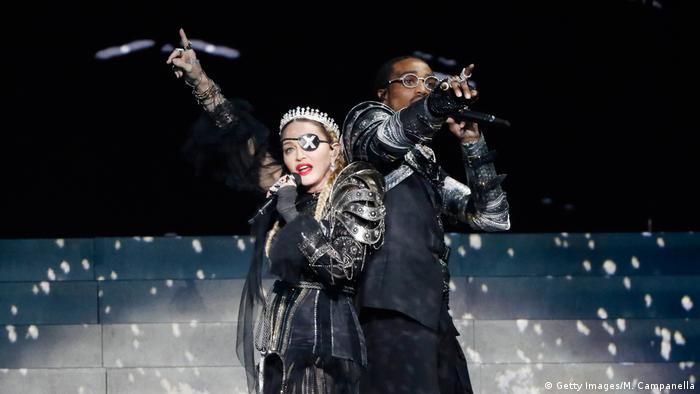 It was a cliffhanger. Madonna had been in Tel Aviv since Wednesday and occupied the entire top floor of one of the city's luxury hotels. Rumor had it that the Russian delegation to the Eurovision Song Contest had to relocate to make room for her entourage of roughly 100 people.

Still, for days, the contract hadn't been signed. Would she or wouldn't she? Only after midnight Thursday did Jon Ola Sand finally confirm that the Queen of Pop would perform at Eurovision. In interviews up to that point, the European Broadcasting Union's executive supervisor had been quiet, but firm: "No contract, no appearance."

Jon Ola Sand is perhaps the world's only impresario who could afford not to worry about whether Madonna might appear or not: He is in charge of the world's biggest music show — with an estimated 200 million viewers — and there could be no doubt that the show would go on.

Read more: Should the Eurovision Song Contest be politicized?

It did. After all 26 competing countries had performed and votes from the television audience were coming in, Madonna graced the stage sporting long blonde braids, a silver eyepatch and a silver outfit.

Interviewed by the host of the event, Madonna was then asked whether she was enjoying Tel Aviv. "Sure," she replied drily, "I go to my hotel, to rehearsal. I look at the beach." And what would she like to say to the participants? "To get here was not easy. You have a dream and make many sacrifices to earn your way to this place. That makes you a winner, no matter what happens."

Then she continued, "Never underestimate the power of music to bring everything together."

In "Like a Prayer," she was backed up by a 35-member chorus, and in "Future," Madonna joined rapper Quavo in a duet. It was a world premiere ahead of the release of Madonna's album Madame X on June 14.

Read more: Germany Eurovision 2019 team S!sters eager for the show to get started

Her performance of "Like a Prayer" began with a chorus of cowled monks chanting on a scarlet red stage. The singer appeared in a black robe with a silver crown, then descended the stage as she sang the 30-year-old song, sometimes off-key, proving that the performance was authentic and not playback.

An interlude accompanied by a melody from Peter Tchaikovsky's Nutcracker followed before the new rap tune unfolded. "Everyone is coming to the future," she rapped to a piercing electronic beat, later joined by her partner, Quavo. At the conclusion, the two tumbled over backward from the top of the staircase.

The unconventional Eurovision engagement came about after the Canadian-Israeli billionaire and Tel Aviv resident Sylvan Adams agreed to pay the fee of approximately $1 million (€895,000), knowing the event would help to promote his home country.

A follower of the Kabbala Jewish mystical tradition, Madonna has made no secret of her fondness for the Middle Eastern country.

This year's Eurovision Song Contest entries varied from a call to action to end capitalism to pure party songs. The winner won on a personal note, says DW's Rick Fulker. (19.05.2019)

An activist appropriated an icon of the Virgin Mary's halo with the LGBT rainbow colors — and is now facing charges. Her protest against the Catholic Church's intolerance has highlighted a significant rift in Poland. (10.05.2019)

The theme of this year's Eurovision Song Contest is "Dare to Dream." But the dream is now over for the 15 nations eliminated from the competition. The remaining 26 entries will battle it out in this weekend's finale. (16.05.2019)

Members of the Ukrainian band Kalush Orchestra have been given special permission to leave the country to take part in the 2022 Eurovision Song Contest. The musicians want to use the high-profile event to remind people of the war in Ukraine.