Macron issues plea for Europe ahead of EU elections

In a Europe-wide column, French President Emmanuel Macron has laid out a plan to protect democracy in Europe. It includes new border controls and higher penalties for firms that flout climate, tax or data rules. 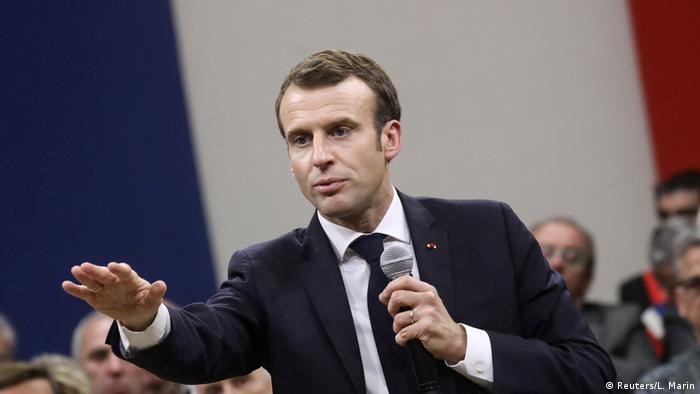 French President Emmanuel Macron has outlined his vision for fundamental reform of the European Union in an editorial to be published on Tuesday in leading newspapers in each EU country.

His impassioned call for a "European Renaissance" comes amid unease about a continued upswing in support for far-right, nationalist parties in the EU elections in May.

Macron, who has been under pressure for months from the Yellow Vest movement, warned that the May elections would be "decisive for the future of our continent."

In an apparent wake-up call to supporters of far-right parties, he added: "Nationalism offers nothing. It is a project of rejection ... We can't let nationalists with no solutions exploit people's anger. We can't sleepwalk to a diminished Europe."

The editorial was widely seen as the start of Macron's own campaign for the May elections. He has made no secret of his plans to form a centrist, pro-Europe alliance to stave off populist and nationalist movements that have been gaining ground across the continent.

The European Parliament elections are set for May 23-26.

Germany's socialist party has presented a fundamental EU reform agenda at their convention in the western city of Bonn. Members decided against calling for the creation of a "European Republic" in the manifesto. (23.02.2019)