The French president has pledged hundreds of millions for solar projects in developing countries at the International Solar Alliance summit in New Delhi. He also took a jibe at Trump for leaving the Paris Agreement. 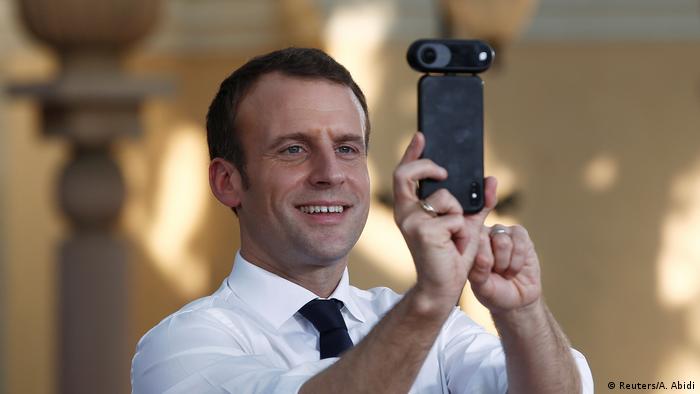 French President Emmanuel Macron stressed the need for "concrete action" on renewable energy projects at the first meeting of the International Solar Alliance (ISA) in New Delhi, co-hosted by France and India.

The ISA, an intergovernmental body established in 2015 on the sidelines of the Paris Climate Change Conference, aims to support sunshine-rich countries in harnessing solar energy at an affordable cost.

Macron, who arrived in India Saturday on a three-day official visit, has pledged an extra €700 million ($861.5 million) for solar energy projects in developing nations. France had already committed €300 million in 2015. 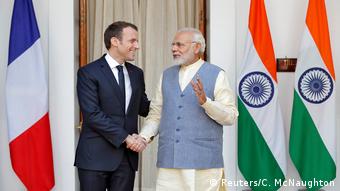 Macron arrived in India Saturday on a three-day official visit

The alliance set a target of producing 1 trillion watts of solar power by 2030. So far 61 countries have signed the treaty and 32 have ratified it.

"We need to remove all obstacles and scale up" solar energy production, Macron told the gathering of investors and world leaders from 24 countries, including Australia and Sri Lanka.

Prime Minister Narendra Modi, whose country pledged to fulfill at least 40 percent of its energy needs from renewable sources by 2030, said the ISA nations will have to "increase solar in our energy mix."

"We have to make sure that a better and more cost effective solar technology is available to all," Modi added. "Promoting its development and use can bring prosperity for all and can help reduce the carbon footprint on Earth."

Criticism of the US

Macron took a jibe at US President Donald Trump at the summit for his decision to withdraw from the Paris climate change agreement.

Without directly mentioning Trump, Macron praised the "solar mamas," a group of women trained as solar engineers, saying that the women had continued their mission to promote solar energy even after "some countries decided just to leave the floor and leave the Paris Agreement."

In June last year, Trump withdrew from the Paris climate change agreement, which his predecessor Barack Obama had signed in 2015.

Trump said the deal was too costly for the US, but that he would consider renegotiating what he called a bad deal.

The Paris Agreement is the first climate accord in which all states defined their contributions in the fight against climate change. Under the deal, global warming should be limited to "well below 2 degrees" Celsius, ideally to less than 1.5 degrees compared to the preindustrial era.

The Paris Agreement remains on track. Talks in Bonn went 12 hours into overtime as participants reached an agreement on climate finance. But now comes the tough part. (18.11.2017)

India is at the top of the list of nations expected to be worst hit by the adverse effects of climate change. It is striving to overcome the problem by advancing strategies like investing massively in renewable energy. (06.11.2017)