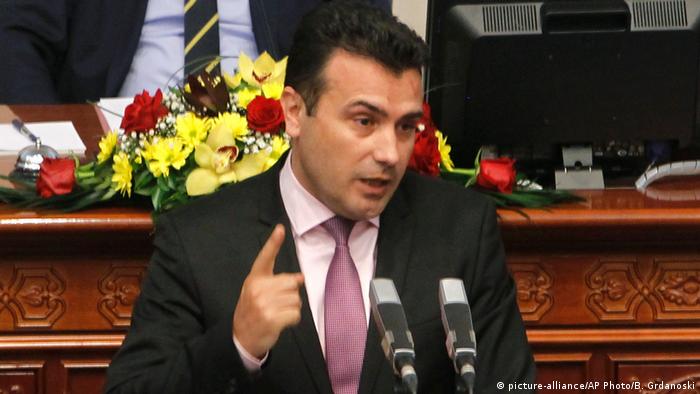 Macedonia's parliament late Wednesday approved a new center-left government, raising expectations of an end to two years of political crisis that threatened to plunge the country back into interethnic conflict.

Zaev vowed to pursue NATO and EU membership, which has been blocked by neighboring Greece over a name dispute. Athens demands the country be recognized officially as the Former Yugoslav Republic of Macedonia.

The new prime minister also pledged to improve the economy, clamp down on corruption and heal simmering ethnic tensions.

"The concept of one society for all is the future of Macedonia," Zaev said Wednesday.

Zaev has said he would meet ethnic Albanian demands, including making Albanian a second official language.

About a quarter of Macedonia's population is ethnic Albanian and the country almost broke out into civil war in 2001.

Under the coalition agreement, seven of the 25 cabinet posts will be held by ethnic Albanians.

Gruevski's party received the most votes in December's snap elections but was unable to form a coalition after his Albanian partners abandoned him to back the Social Democrats.

Zaev's party and VMRO-DPMNE have had sharp differences since a 2015 wire-tapping scandal plunged the country into crisis.

Macedonia has effectively been without a government for the past six months. The stalemate was broken after President Gjorge Ivanov reversed his previous refusal to give Zaev a mandate over concern granting more rights to Albanians would damage the country's unity and sovereignty.

The crisis reached a peak last month when Macedonian nationalists stormed parliament after an ethnic Albanian was elected president of the chamber.

Montenegro 'entered the West' through NATO

The ex-Yugoslav state of Montenegro is about to become the newest member of the NATO alliance, despite the country's long-running ties with Russia. Moscow is not putting up much opposition to the move, experts told DW. (26.05.2017)

Police charge 15 in Macedonia after attack on parliament

The arrests are the latest twist in an ongoing political drama that has featured allegations of mass surveillance. Right-wing nationalists are against a power-sharing agreement with the ethnic-Albanian minority. (30.04.2017)