While civil unrest havocs through one city, the other, only an hour's ferry ride away, remains relatively unscathed by Hong Kong's protests. What makes these two territories — ruled by the same principle — so different? 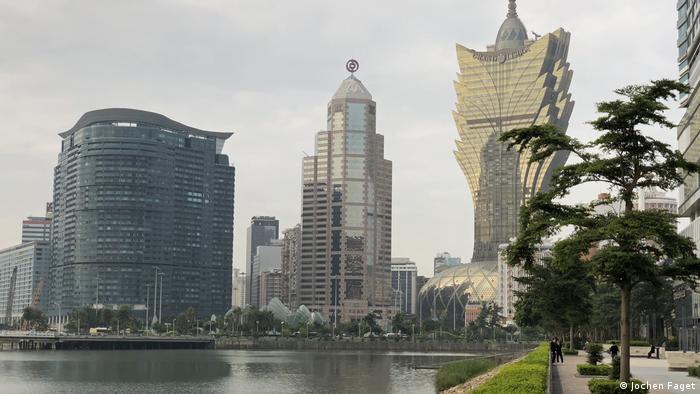 Hong Kong has come to the end of its fifth consecutive month of pro-democracy protests. What began as mass demonstrations against a controversial extradition bill turned into sustained protests for greater autonomy from the mainland, police accountability and the resignation of Carrie Lam, the city's chief executive.

Only an hour's ferry ride away across the Pearl River Delta, Hong Kong's neighbor rests relatively peacefully in contrast to its own chaos. The semi-autonomous territory of Macau, often seen as China's "better-behaved SAR," is connected to China by the world's longest sea bridge. The territory has remained mainly untouched by the violence in Hong Kong, raising questions how Macau became the "poster child" for China's governing framework and Hong Kong a symbol of resistance.

Kin-Sun Chan, an assistant professor in government and public administration at the University of Macau, told DW that "most Macau people do not back the rioters in Hong Kong but support the Hong Kong SAR government."

However, due to the vast differences between the two regions, Chan said it's difficult to compare Hong Kong and Macau directly. "The two economies are very different. Also Macau is much smaller. As a result, Macau is more dependent on mainland than Hong Kong."

Although functioning under the same governing principle, Hong Kong and Macau have some stark differences. Macau's population of 623,000 is just a fraction of Hong Kong's 7.4 million. Almost half of Macau residents were born in mainland China, in contrast to Hong Kong's 20%. "Most Macau people still recognize themselves as Chinese. People have a strong link with the mainland," Chan told DW.

In addition, Macau's economic development is fundamentally different to that of Hong Kong's. "Compared with Hong Kong, Macau is a micro-economy and needs a good relationship with China," Chan emphasized.

While Macau has the world's fourth highest gross domestic product (GDP) per capita in the world — beating Hong Kong's — its economy is much smaller and more dependent on mainland for its financial survival. 70% of its tourists in 2018 were from mainland.

Reputed as the "Monte Carlo of the Orient," gambling equates to 50% of Macau's economy. Meanwhile, Hong Kong, Asia's financial hub, relies more on its interconnectivity with the Western economy.

Another added difference between the two SARs lies in their history. Hong Kong was colonized by Britain for over 150 years and handed back to China in 1997. Macau, colonized by Portugal in 1557, was returned to China in 1999. The regions' colonial roots left a mark not only on governing laws and civil society structures, but also the ideology and cultural identity of its residents.

Due to the impact of its British colonial history, for a long time many Hong Kongers came to see themselves as distinct from mainland Chinese.

Professor Yuk-Lin Wong from York University argued that Eurocentrism and the Western propaganda that came with British rule led parts of Hong Kong's population to see themselves as "superior" to mainland Chinese. Consequently, some Hong Kongers came to enjoy their newfound status.

Under the British, Hong Kong also introduced new or variant forms of belief and ranking systems, such as elitism and social hierarchy. Hong Kong gradually embraced liberalism and the rule of law and, even more so after independence, freedom of speech.

In Macau however, the Portuguese, struggling to keep control of the government, were more lenient in integrating China's Communist Party components into Macau's governance ahead of its return to the mainland. Macau had already been under de facto Chinese rule for 33 years prior its independence.

Another important side-effect of colonial rule was that mafia groups, known as the triads, thrived and created chaos across Hong Kong and Macau. In Macau, the triads caused economic recession and violence due to gang fighting over casinos. By the time China regained control over the two territories, the vast majority of triads were dispelled. As a result, many Macau residents saw China's intervention as a restoration of social order and financial stability.

Rule of law and social mobilization

Macau's only mass protest in the last two decades was an anti-retirement bill rally in 2014, as well as an attempted pro-democracy protest to push forward a national referendum on Chief Executive Fernando Chui Sai-On's re-election, where police had been quick to crush dissent.

In Hong Kong, residents already became aware of their shared interests and the power of mass mobilization during its 2012 anti-national education scheme protest.

A highly commercialized city, Hong Kong's governing principle is known as New Public Management, an approach that emphasizes efficiency. According to Chan, the city's legal system performs better than Macau's because it has a more developed civil society and rule of law. As a result, Hong Kongers' perception of safety when demonstrating is stronger because as Chan argues, they know they are acting within a more established rule of law, which increases the likelihood of protesting an authoritarian government.

In addition, as seen during Hong Kong's anti-extradition law protests, some of the city's lawyers didn't hesitate to criticize the government and provided legal assistance to dissidents.

In Macau, there is a strong presence of associations as well as of "influential neighborhoods" comprising mainly of member of the pro-Beijing elite. All associations such as the Macau Federation of Trade Union and Juangmen Communal Society hold seats in the city's legislative council. Chan said while such associations make it much easier for the SAR government to build consensus in society, for example "bringing together the voices of the disadvantaged groups" through multiple official platforms including the legislative assembly, they can also act as "pressure groups."

Will social unrest spread to Macau?

Professor Kent Deng of economic history at the London School of Economics and Political Science told DW, "it's still a bit too early to say Hong Kong has failed while Macao has been a success. The economic structures of these two ex-colonies are very different and so are their links to China. We shall give them another five years to make a conclusion."