In a recent German survey, 44 percent of respondents said they partially, or wholly believe the media regularly lies to the people, as the Pegida movement asserts. Media experts examine whether that's true. 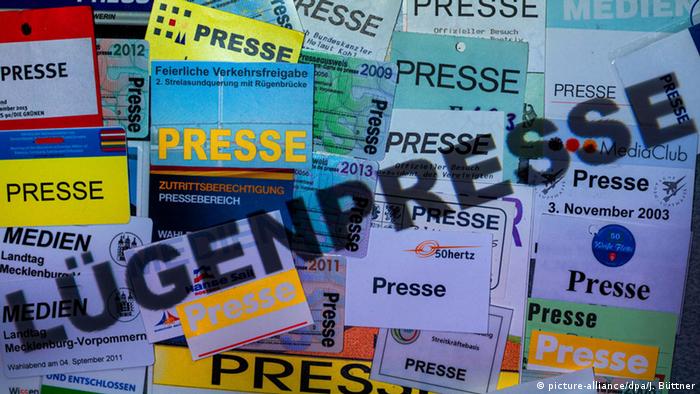 Media outlets in Germany "are controlled from the top," and therefore spread "embellished and inaccurate reporting." Nearly half of the 1,000 German citizens recently polled by the Dortmund-based Forsa Institute agreed with these statements.

Currently, the refugee situation dominates media reports. But Germans are simultaneously experiencing the crisis first-hand in their own towns and cities - and often finding dramatic differences between their perceptions of these events and journalists' representations of them.

This discrepancy has been busying media experts since former Berlin Finance Minister Thilo Sarrazin began describing Germany's integration of immigrants as a failure in his 2010 book "Germany Is Abolishing Itself."

The media outrage that rained down upon the veteran Social Democratic politician was enormous - despite polls suggesting large numbers of Germans agreed with him.

This scenario was repeated four years later in reports on the Islam-critical Pegida movement (Patriotic Europeans Against the Islamization of the West). Again, the media were universally scornful, while surveys showed many people agreed with Pegida's concerns.

"We are far from having freedom of opinion," said Norbert Bolz, a communications researcher at the Technical University of Berlin, during a television interview. It is one thing to show images of well-integrated immigrants in the press, but to get the whole picture one has to report on the negative aspects of the story as well.

That does not always happen on topics such as immigration and that gives rise to suspicions of manipulation. Bolz says many media outlets are under the influence of a left-wing intellectual discourse.

"It is precisely the same people who years ago fought for transparency, freedom of the press and freedom of speech who are now the powers that decide what subjects are taboo," he said. "Part of freedom of opinion is respect for those with dissenting views."

Bolz says this is often lacking - and other industry observers agree with him. 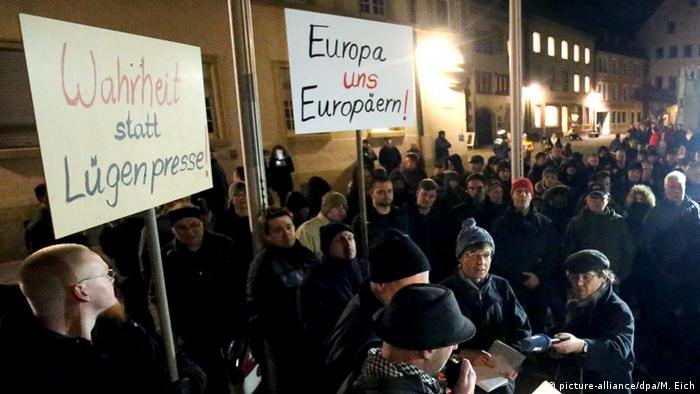 Many Pegida protesters held up signs vilifying the German media

When journalist Roland Tichy wrote critical reports about Russian President Vladimir Putin on his Internet blog, he experienced a flood of angry comments from Putin supporters. "They tried to crush us."

In the face of mechanisms such as the Kremlin's use of paid Internet "trolls," many journalists stop trying to defend themselves. That, he says, is a mistake.

But Tichy, an experienced economist, editor-in-chief of several large business publications, and now CEO of the Ludwig Erhard Foundation in Bonn, offered very different examples during a presentation on the subject of "Media and Truth" at an event hosted by the Walberberg Institute for Social Sciences. "The borders between lies, concealment and self-censorship are fluid."

For example, Sebnitz: In this village of 8,000 residents in Saxony, where right-wing radicals often make headlines, the son of a German-Iranian couple, both of whom are pharmacists, died accidentally. The immediate headline read: "Neo-Nazis Drown Child."

In truth, the boy drowned after having a heart seizure. A newspaper that reported on the actual facts of the accident nevertheless added: But the way the mood is in Sebnitz, neo-Nazis could well have done it."

An international comparison conducted by the Ludwig Erhard Foundation also showed that German journalists see their role differently than their colleagues around the world. Tichy says: "They are zealots for a cause, and they fight for something, instead of reporting on it."

Another example concerns words and images. Self-described "antifascists" attack police officers with clubs. But in the photo series only Pegida protesters are seen confronting police. Tichy says Pegida supporters are inevitably described as "growling," while the left-wing countermovement only "calls."

Germany is also unusual when it comes to media descriptions of criminals. Tichy was forbidden by court order to write the name of an economic fraudster, who, after being released from jail, was once again trying to acquire investors for dubious oil shares.

"Here we have a situation in which journalists are forced to conceal the truth," he said. The German Press Council's press code prevents journalists from writing about the ethnic background or religious affiliations of accused or convicted criminals except in exceptional cases. "Is that protection or censorship?" Tich asked. 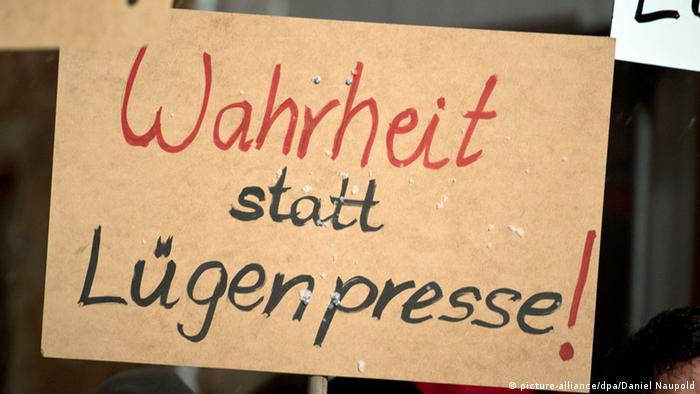 The placard reads: Truth instead of a lying press

With the increased use of Internet sources and the interconnectedness of social media, mainstream media reports can be instantly compared and exchanged. The interpretational sovereignty of journalists is over, leading media scholars say.

Above all, blogs have presented ideas that are not represented in the mainstream, left-wing media. And that fact has served to increase doubts about whether reporting is always truthful.

"In any case, it would be too easy to simply disqualify accusations of mendacious media as right-wing populist fantasy." That is how Lutz Hachmeister, communications scholar and longtime manager of the Adolf Grimme Institute, expressed his thoughts during an interview with DW.

He says there are grounds for this accusation: "There are interrelations among the elite in journalism, politics and industry. People notice that. Then they think that these elites are somehow connected, intertwined and collusive, and that they are feeding us misinformation - that they are not independent enough."

Hachmeister has consistently reported on these elite interrelations in his publications. He says this interdependence can, for instance, be found even in the German public broadcasting system.

This reached a low point in 2014, when the German Constitutional Court declared the structures of the supervisory boards of the German public television station ZDF to be illegal.

Everything controlled from the top?

Are elites controlling the press in Germany? "That is a conspiracy theory that simply isn't true," says Hachmeister, "but it does raise the question of when things are reported and when they are not."

That is often decided according to existing ties between media outlets and social elites, he said: "The public easily recognizes that there is much less independence than the press likes to claim."

Since political polarities have eroded, there are also fewer "gatekeepers" making sure that certain stories are reported, or certain tendencies followed in the media, Hachmeister said.

Nevertheless, in a YouGov opinion poll last year, 47 percent of respondents considered German reporting on the Ukraine crisis to be one-sided. And only 40 percent said they believed that the German press was objective and independent.

How free is the press in Germany?

The Nazis cancelled it, the GDR circumvented it. It was only after German reunification 25 years ago that freedom of the press was permanently anchored in the German constitution. But it is not limitless. (19.10.2015)

DW Director General Peter Limbourg in Moscow: "Propaganda is an affront to our intelligence"

Deutsche Welle has opened a new, modern studio in Moscow. The Russian capital remains "one of our most important locations," said Director General Peter Limbourg to around 100 guests. (21.09.2015)

A jury of linguists, journalists and authors have selected 'liar press' as the 'Unwort des Jahres,' or 'German buzzword of the year.' The award draws attention to an unwelcome term widely used in public discourse. (13.01.2015)