How free is the press in Germany?

The Nazis cancelled it, the GDR circumvented it. It was only after German reunification 25 years ago that freedom of the press was permanently anchored in the German constitution. But it is not limitless. 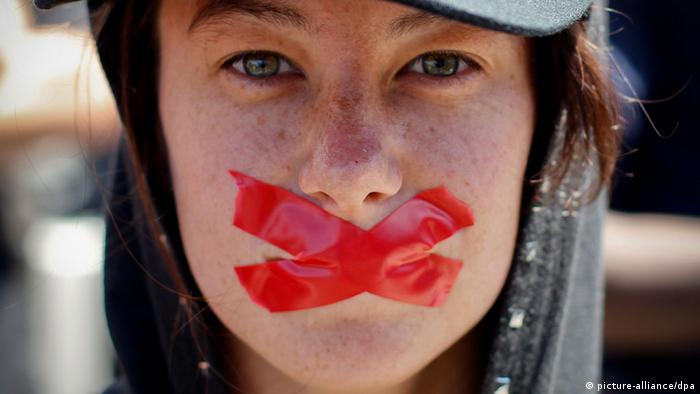 It is scenarios like this that are worrying data protection advocates in Germany, because they compromise press freedom - and Germany has a tainted history when it comes to guaranteeing freedom.

Media was closely controlled under the Nazi regime in the 1930s and 40s, and then in East Germany under the communist government. Now the country is particularly vigilant about preserving its press freedom.

The history museum Haus der Geschichte in Bonn, the former capital of West Germany, is currently tracing Germany's history of press censorship and freedom in an exhibition called "Under Pressure! - Media and Politics." 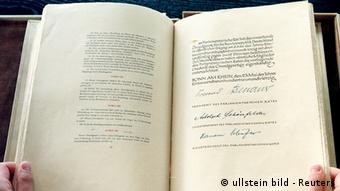 Germany's provisional constitution - its Basic Law - was passed in 1949

In roughly 900 exhibits, it presents the history of German press, focusing on the advent of digitalization and its influence on today's investigative journalism. Collections of magazine and newspaper covers since 1933, police equipment from the so-called Spiegel Affair in 1962, protest signs, and even the original mobile phone of Chancellor Angela Merkel that was intercepted during the NSA scandal in August 2013, are on show.

Germany's most dramatic period of press restriction occurred under the Nazi regime. During that time, all media were required to work for the Nazis "for the protection of the people and state." That made it easy for the ruling party to distribute their propaganda, from anti-Semitic rants in newspapers to radio broadcasts of Hitler's passionate speeches.

While the Nazis were in power, it was illegal to listen to "enemy broadcasters" from abroad, and those who did were threatened with detention in concentration camps.

When World War II came to an end in 1945, the occupying Allies initially closed all existing newspapers in both East and West Germany to prevent residual Nazi influence. Journalists and publishers who had been high-ranking party members were banned from their professions.

Instead, the Allies launched new, nationwide newspapers and examined articles prior to publication in order to avoid distribution of national socialist ideas, at least in the West.

When the Federal Republic of Germany was founded on May 23, 1945, freedom of opinion and the press was written into the Grundgesetz - the new country's constitution. 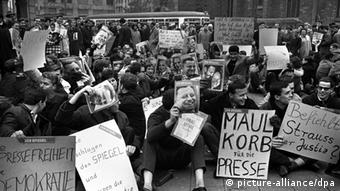 The Spiegel Affair led to student protests in 1962

However, this wasn't the case in the East. To publish something in communist East Germany, you needed official permission from the state, and only selected organizations were allowed to do so. Freedom of the press was mentioned in the East German constitution, but was very limited.

But it was not smooth sailing for the West German government. The German weekly "Spiegel," known for its investigative stories, published an article on October 10, 1962 saying that Germany would not be able to defend Europe in the event of a third world war. Editor-in-chief Rudolf Augstein and others from "Spiegel" were arrested on suspicion of treason. German students demonstrated against what they viewed as an attack on press freedom, and outrage spread.

After reunification in 1990, the West German media quickly established itself in the former East. Since then, the number of independent magazines, newspapers and television broadcasters has decreased and online journalism has exploded. Political talk shows, blogs and social networks contribute significantly to public discourse and opinion-making today.

This digital revolution has brought a lot of topics to public attention. In June 2013, whistleblower Edward Snowden revealed that the American intelligence service NSA had monitored dozens of heads of state, including German Chancellor Angela Merkel. The NSA gathered data from ordinary citizens and leaders worldwide, claiming it was necessary in order to prevent terror attacks. 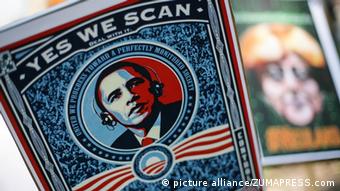 While public interest in data protection remains strong in Germany, a data retention law has been drafted that would require Internet providers to store data associated with phone calls and IP addresses for two-and-a-half months. The location of mobile phones would be saved for four weeks. The proposed legislation is being reviewed by the German parliament and could go into effect as early as November 2015.

The Press Freedom Index 2015, published by Reporters Without Borders, ranks Germany 12th in terms of press freedom. The working environment for journalists is sound, according to their report. However, journalists researching far-right political issues are reported to be monitored by the federal government. If the data storage law is passed, that could push down Germany's future ranking on the Press Freedom Index.

The exhibition "Under Pressure! - Media and Politics" runs through April 17, 2016, at the Haus der Geschichte museum in Bonn.

During the September coup in Burkina Faso, journalists and the media were targeted by the presidential guard. DW Akademie and five other organizations express their solidarity with those upholding freedom of expression. (12.10.2015)