Launching the world's biggest book fair, Salman Rushdie and the organizers of the event make one thing clear: Beyond the huge industry, publishing plays an essential role in protecting freedom of expression. 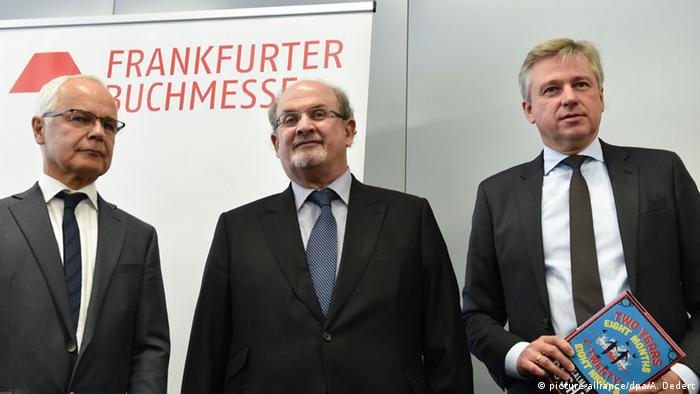 With over 7,000 exhibitors from about 100 countries, more than 9,000 accredited journalists and 4,000 events, the 67th Frankfurt Book Fair is "the largest trading place for content worldwide."

The opening press conference was held on Tuesday (13.10.2015) and the event will take place until October 18. Nearly 300,000 visitors are expected during those five days.

Literature and publishing as troublemakers

Still, beyond the big numbers and the huge business deals, this year's event promises to offer a book fair that's more political than ever. DW's Rainer Traube tweeted from Frankfurt:

Setting the tone, the British-Indian author Salman Rushdie was invited to speak at the opening press conference. Earlier this week, Iran's culture ministry had announced it would withdraw from the event because of his presence. A fatwa was issued in Iran in 1989 to kill the author of "The Satanic Verses."

Rushdie reminded that freedom of expression is a universal value and stressed the importance of defending writers as well as writing.

He believes the book industry plays a major role in this area:

The organizers of the Book Fair also reminded that "publishing and literature have always been troublemakers," as they wrote in a press statement. "It is the role of literature to describe the state of the world and to question the things we take for granted," added Juergen Boos, director of the Book Fair (pictured right).

Current issues such as migration, flight, freedom of expression, and terrorism will be addressed throughout the book fair. One major meeting hall, called "Weltempfang" (World Reception), will offer a series of talks focusing on the theme "Exploring Boundaries," with political discussions on issues such as feminism or net activism.

Each year, the fair focuses on one particular country and in 2015, the guest of honor is Indonesia. Publishers from conflict-ridden countries are also taking part, among which from Syria.

Although these themes were chosen before the refugee crisis took center stage, the massive arrival of refugees in Germany definitely influences this year's book fair, said Heinrich Riethmüller, director of the German Publishers and Booksellers Association (pictured left). He hopes the event will spread the "call for freedom and tolerance throughout the whole world."

Refugees are offered free admission to the Book Fair, with guides who can speak their language and help them find their way through the gigantic event.

Despite strong reviews, Frank Witzel wasn't considered a favorite for the prestigious German Book Prize - until he won. His 99-chapter oeuvre offers a rich, enigmatic look at Cold War Germany - through a boy's eyes. (13.10.2015)

In countries like China, Egypt or Iran, publishing a book can be a crime. As the Frankfurt Book Fair opens, here are publishers that give silenced authors a voice. One even helped its author defect. (13.10.2015)