Lower than expected turnout for Muslim anti-terror march in Cologne

A peace march organized by German Muslim groups to condemn terrorism and violence in the name of Islam has been held in Cologne. Organizers had registered 10,000 participants, but actual turnout was much lower.

Under gray skies, demonstrators waved banners proclaiming "together against terror" and "terrorism has no religion" on Saturday in the western German city of Cologne. Estimates of the number of people who took part varied from several hundred to about 3,500.

The march, organized by Islamic scholar Lamya Kaddor and peace activist Tarek Mohamad to condemn violence in the name of Islam across the world, was preceded by a heated debate when Germany's biggest Islamic association, the Turkish-Islamic Union (known by its acronym DITIB), refused to take part.

DW's Arafatul Islam was at the march.

DITIB said it would send the wrong signal to suggest that Muslims were mainly responsible for international terrorism and also maintained that those observing the Ramadan fast could not be expected to march for hours in the summer heat.

Several other Islamic organizations including Germany's Central Council of Muslims took part in the gathering, named "Not with us - Muslims and friends against violence and terror." 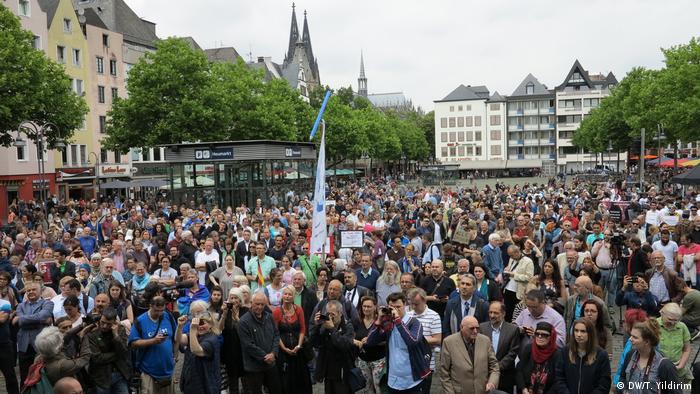 The final tally of demonstrators was as high as 3,500

Read: What you need to know about Ramadan

Co-organizer Kaddor said it was possible that the lower-than expected turnout was a result of DITIB not taking part and added that she thought it sent the wrong message not to be involved in such a march.

About 5 percent of Germany's population is Muslim, with many of them hailing from Germany's Turkish community. The sudden arrival over the past two years of more than a million people seeking refuge, many of them Muslims, has stirred anti-Islam sentiment in parts of German society.

The religious minority has also faced pressure in the wake of recent terrorist attacks committed by extremists claiming to act in the name of Islam, such as those in London, Manchester and Berlin.

One of the demonstrators, 25-year-old Ahmed Maher, who had traveled from Hanover to attend, said terrorists had nothing to do with Islam.

"It's often oversimplified; everything's thrown into one pot. That's why it's good when we Muslims make clear that, of course, we stand for peace - even when it is a little sad that we constantly have to justify ourselves," he told German news agency dpa.

"[First] from the attacks themselves, and then because the blame is put on us," Gurlevik said. "It is important to show that we are against Islamist terror."

Follow-up marches are planned for Berlin and several other German cities.

Germany's Family and Interior Ministries have announced a new national action plan against racism. In tackling extremism, some 100 million euros are to be specifically invested in preventing Islamist radicalization. (14.06.2017)