Ronaldo strikes to become the first player to score in 13 consecutive away Champions League matches. Schalke have an uphill battle to climb if they want to rescue the tie in Madrid. 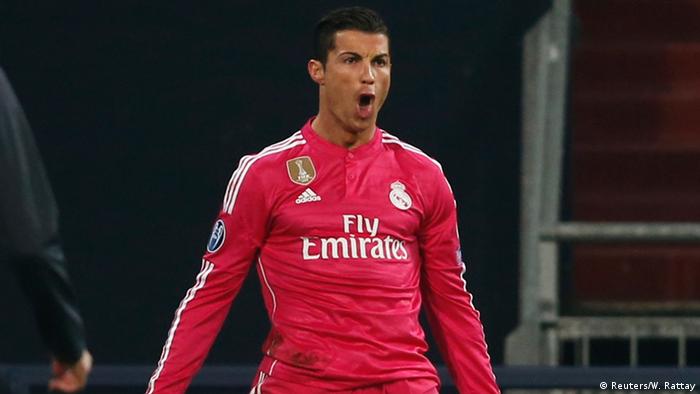 Cristiano Ronaldo ended his goal draught for Real Madrid to leave the Spanish side in control of the Last 16 after a 2-0 win over Schalke.

With his goal, Ronaldo also pegged back Lionel Messi in the all-time scoring charts, with the 28-year-old netting 58 goals in 58 Champions League games. His strike in Gelsenkirchen was his 37th of the current season. Marcelo added the decisive goal late in the second half as Real Madrid cruised to a comfortable win in the stadium where they won 6-1 last season.

Timon Wellenreuther was the busier of the two goalkeepers, making his first Champions League appearance after a recent flurry of first-team football, which included a Bundesliga debut away to Bayern Munich.

But following an edgy start with several fouls and yellow cards, the Spanish keeper palmed away a drilled shot from Klaas-Jan Huntelaar before the striker was eventually replaced by 19-year-old Felix Platte.

Real, however, went ahead in the 26th minute when a cross from Dani Carvajal was met by Ronaldo as Wellenreuther misjudged his approach for the ball. The Portuguese star and Ballon D'Or winner brought an end to his run of almost five hours without a goal after a barren spell for Carlo Ancelotti's men. 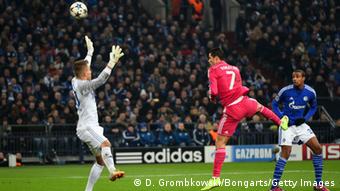 The Royal Blues and young Platte almost had their moment of glory in the 74th minute when the former Paderborn youngster smashed a volley from the edge of the box against the crossbar. In the melee that followed, right-back Astuto Uchida couldn't bundle the ball past Marcelo and Casillas.

But Real Madrid would add a second with 11 minutes remaining, as Brazilian Marcelo came inside on to his weaker foot and struck the ball powerfully past Wellenreuther.

Meanwhile, the Last 16 encounter between FC Basel and FC Porto lies in the balance as the teams drew 1-1 in Switzerland on Wednesday night.

Basel, who progressed from a group including Liverpool, took the lead inside 11 minutes through Derlis Gonzalez. The striker had the speed to break clear of the Porto defense and he finished with the outside of his boot to give the hosts the lead.

Despite having a goal ruled out by English referee Mark Clattenburg, Porto leveled in the 79th minute from the penalty spot after Walter Samuel was penalized for handball. Danilo converted - his 3rd goal of the season in all competitions - to hand the Portuguese side a vital away goal before the second leg in Porto in March.

Champions League as it happened: Schalke vs Real Madrid

Relive all the highlights of our Champions League live blog for Schalke against Real Madrid. The two teams met last season with the Spanish side winning 6-1 at the Veltins Arena. (18.02.2015)

Eric Maxim Choupo-Moting has returned from the Africa Cup of Nations to a Schalke side that has made a solid start to 2015. On Wednesday their new style comes under its biggest test yet - against Real Madrid. (16.02.2015)