More than 1,000 activists and experts attended the 4th World Congress Against the Death Penalty in Geneva to fight agains capital punishment. 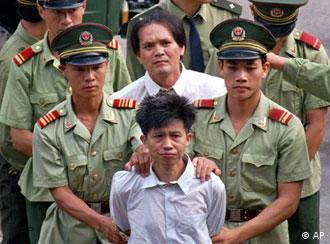 Two men led by police officers into a stadium in Shenzhen, China, to hear the public announcement for their death sentences for drug-related convictions

China claims its number of executions is dropping, now that all 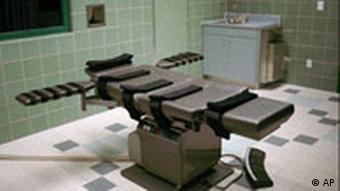 verdicts must go through the Supreme People's Court, but this cannot be verified.

What is Chinese public opinion?

Many Chinese polls show support for the death penalty at between 80 and 95 percent. But Dietrich Oberwitter at Germany's Max Planck Institute for Foreign and International Criminal Law says his study was the first major, systematic population survey and it came out with different figures.

"The respondents only were in favor of four crimes to be punished by the death penalty. And those were: murder, intentional injury, drug 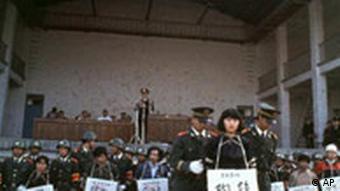 Convicted drug dealers and traffickers are assembled by police at a public sentencing before their execution by gunshot...

dealing and sexual abuse of girls. And a lot of other crimes which are currently under the threat of the death penalty in China did not find the majority of the population who think that is an appropriate punishment. So its not only that they are all harsh, but there are shaded attitudes towards crime and punishment."

Public sentiment same as in the West

The study was conducted randomly in three provinces and included 4,500 anonymous respondents. According to its results, which were released in October, 2009, general support of capital punishment in China is only around 58 percent. "You can say that it is not completely different from any other state in the Western world," says Oberwitter. "So one argument you often hear is that Asian populations are different, that they are more pro-strong punishments and the results on the whole are more or less in line with other surveys we know from Western countries." 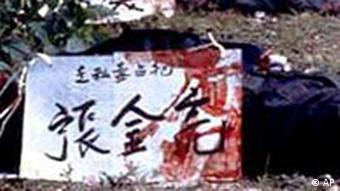 ...those to be executioned in China wear their names on placards around their necks. This picture shows a person who has been executed. In the foreground: the person's placard

country made use of the death penalty at one point, meaning it is one thing most cultural value systems have in common. Hong Lu, author of "China's Death Penalty – History, Law and Contemporary Practices", says support is mainly for reasons of retribution and deterrence.

"Other reasons really include the historical-cultural reasons, partly because the Chinese society has always been a collective society," she adds. "They have always emphasized the collective interests over individual rights. And another reason is probably because of the uncertainty that they are feeling in contemporary society - that they seem to desire a strong law, a more punitive law to try to maintain stability."

Whether or not they support the death penalty, most experts support making figures public because it would entice people to participate in discussions; and that, by all means, is also rooted in historical-cultural values.

65 per cent of China's organ transplants come from executed prisoners

Nearly two-thirds of China's transplanted organs come from executed prisoners, the Chinese state media reported last week. In a bid to curb the illegal trade in human organs, the government has now launched an official organ donation scheme. It hopes this will encourage people to become voluntary donors. (09.09.2009)

Human rights group Amnesty International has highlighted how prisoners on death row in Japan are being driven into insanity by the inhumane conditions of their confinement. Calling Japan’s practice of capital punishment “an anomaly” among the major developed nations, the international rights group is demanding the suspension of the death penalty there. (05.10.2009)

The human rights group Amnesty International has issued its annual survey on the death penalty. (24.03.2009)