Indigenous communities of northern Guatemala have been given the right to make a living off their tropical forests, preventing illegal logging and destruction. The project helps save the forest as well as combat poverty. 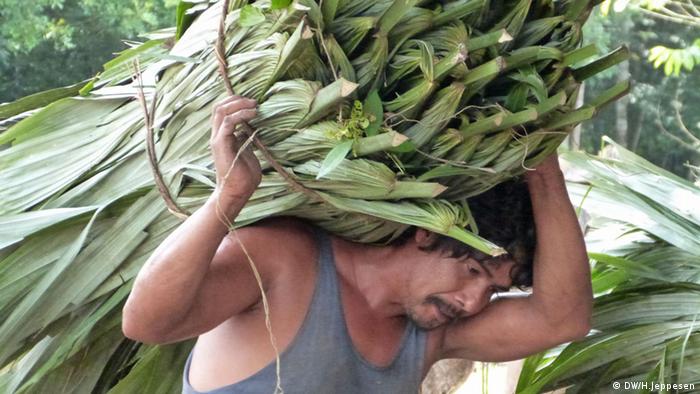 Guatemala’s northern province, the Peten, is home to the Maya Biosphere Reserve – a vast area of tropical forest, wetlands and Mayan ruins. It’s considered one of the most biodiverse regions on the planet.

But the lush area that lies between Mexico and Belize, is also home to crippling poverty. For centuries, the indigenous population has suffered under colonization and military dictatorships with many locals driven away, forcefully relocated and even murdered.

Things have come a long way since. There are now initiatives to engage residents, hand them back rights to produce from the forests and give them a say in managing forest resources. The aim is to combat poverty as well as protect the forest. 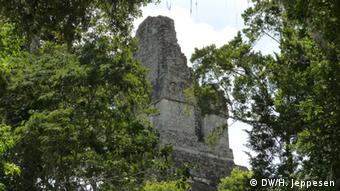 The biosphere reserve is home to several Mayan ruins

The indigenous groups of the Maya Biosphere Reserve have organized themselves in the ACOFOP (Asociación de Comunidades Forestales de Petén), an association of forest communities in the Peten. They have even received a forestry concession to sustainably log and use the forest.

"One of the biggest successes of ACOFOP is that the communities have the chance to benefit from the forest," Marcedonio Cortave, the president and one of the initiators of ACOFOP, told DW. "It’s shown that extremely impoverished groups can develop through the sustainable use of resources and improve their living standards."

Back in 1986, after the end of the military dictatorship in Guatemala, there was even international support for plans to set up a biosphere in the old Mayan stronghold in the Peten. But, Cortave said, most of the western non-governmental organizations wanted to place the entire area under protection without involving the indigenous population.

"That’s a model that may work in rich countries. But environment conservation needs to be done differently in a nation with high poverty rates and few chances for people," Cortave said. "You have to emphasize the sustainable use of resources."

Carmelita is an example of how that works in practice. The community in the north of the Peten consists of 80 families with a total of 380 residents. Earlier, the village lived off chicle, the white, gummy sap from the bark of the Sapodilla tree. It was exported as a raw material for chewing gum. But with the synthetic production of chewing gum, prices and production of chicle fell, robbing the community of its livelihood. 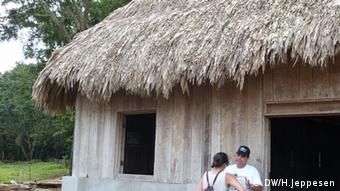 A traditional roof made of guano palm leaves

Today, the families of Carmelita depend on the forest, especially tropical wood, to survive. Each year, they cut one to three trees per hectare. The wood is certified by the Forest Stewardship Council, ensuring that it’s sustainably produced. Similarly, FSC-certified xate leaves are exported to Mexico and the US where they are used in flower arrangements.

Residents continue to tap the chicle sap and use the leaves of the guano palm for traditional roofs. Pimiento – a type of wild pepper – is also among the profitable products sourced from the forest. All in all, the community manages over 50,000 hectares of forest, of which more than 20,000 hectares consists of wood products.

The formerly impoverished community now has a school, a permanently stationed nurse and health care for all its residents. Young adults wanting to do training in one of the bigger cities are given financial support by the community. An own lumber mill and a carpenter’s workshop provide further training opportunities and jobs. 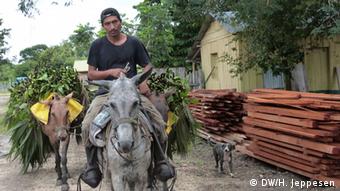 The mule remains a popular mode of transportation in the Peten

And in a more recent development, tourism in the region is being given a boost. A five-day tour brings holidaymakers to Mirador, one of the most famous Maya ruins in the region. It takes two days to travel there on the back of a mule through the rainforest, accompanied by guides, cooks and muleteers from Carmelita.

For the residents of Carmelita, forestry concessions to log, trade and use the forest sustainably has been crucial to their survival. But it’s not just the native population that has benefitted. The forest too has come out a winner.

Whether it’s Carmelita, San Andrés or other poor communities in the Peten, sustainable forestry has proven to the most effective weapon against illegal logging. There are fewer forest fires in areas managed by local communities. And even the biodiversity of the rainforests has been helped through sustainable and long-lasting management that’s calculated in terms of decades and not years. 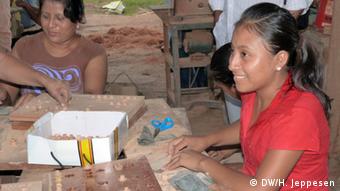 The biggest threat for the local population is the expiration of the forestry concessions. In Carmelita too, residents face an uncertain future because they don’t know for sure whether the concessions they’ve been given for 25 years will be renewed by successive governments.

"We need a long-term vision for the protection of the forests," says David Kaimowitz, an expert on natural resources at the Ford Foundation in New York. "Even the communities need long-term security so that they can plan and manage the forest sensibly."

Günter Mitlacher from the German branch of the World Wildlife Fund (WWF) talks about the challenges of saving the world’s ecosystems and why protecting biodiversity is just as important as bailing out big banks. (08.10.2013)

Oil drilling in Yasuni creates tension between Germany and Ecuador