A list of 12,000 names of Nazis has been uncovered in Argentina, connecting Credit Suisse to massive amounts of ill-gotten gains, the Simon Wiesenthal Center said. Several Argentine regimes were friendly to the Nazis. 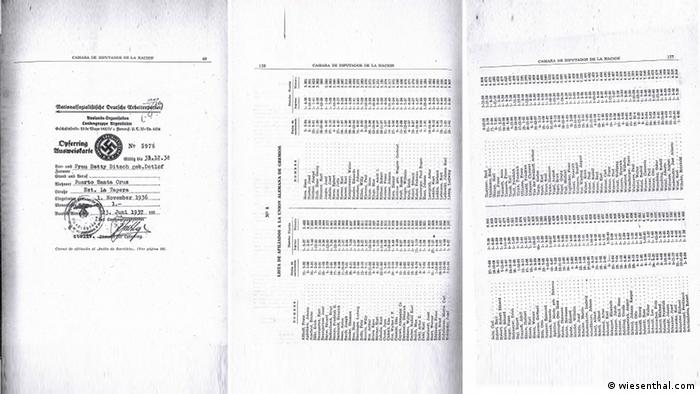 The US-based human rights organization the Simon Wiesenthal Center has published documents discovered in Argentina that purportedly show the names of 12,000 Nazis, Nazi sympathizers and companies that funneled money and valuables looted from Jewish families back into Europe to a bank that is now Credit Suisse.

"We believe that these long-dormant accounts hold monies looted from Jewish victims," the center said in a statement.

From 1930 to 1938, Argentina had Nazi-friendly leaders that welcomed Germans into the country with open arms and was home to thousands of pro-Nazi organizations. It is believed that Argentine banks with ties to Germany took the money stolen from the regime's victims and transferred them to what was then called Schweizerische Kreditanstalt, and is now Credit Suisse. At the time, the institution accepted thousands of transfers from Nazi organizations, including many that were blacklisted by the US and the UK.

"These included such German companies as IG Farben (the supplier of Zyklon-B gas, used to exterminate Jews and other victims of Nazism," the Simeon Wiesenthal Center said.

The NGO has asked Credit Suisse to identity the bank accounts associated with the names "to settle this matter on behalf of the diminishing number of Holocaust survivors."

According to the center, Credit Suisse had once offered to sponsor a conference it was holding in Zürich but withdrew support when they asked to let one of their researchers look at accounts suspected of holding money stolen from Jews.

After pro-Nazi leaders fell from power in Argentina in 1938, a commission was set up to investigate "anti-Argentine activities," mainly tasked with uncovering fascist crimes committed within the country.

However, a coup in 1943 brought pro-Hitler forces back to power in Buenos Aires and much of the work of the commission was destroyed. Yet the Wiesenthal Center reported that Argentine investigator Pedro Filipuzzi was able recently to find the list of 12,000 names and pass it on to them.

"The current story and the remaining assets, arguably looted, of 12,000 Nazis will, we hope, be viewed differently, for the good name of Credit Suisse," the center said.

The Bavarian State Library has returned over 200 books stolen from Freemasons by the Nazis over 80 years ago. The library said it is facing up to the responsibility of its cooperation with the Nazi party. (04.12.2019)