Lionel Messi says he is forced to stay with Barcelona

Football superstar Lionel Messi will stay at Barcelona for another season, avoiding a lengthy legal battle against the "club of his life." But he also accused the club president of going back on his word. 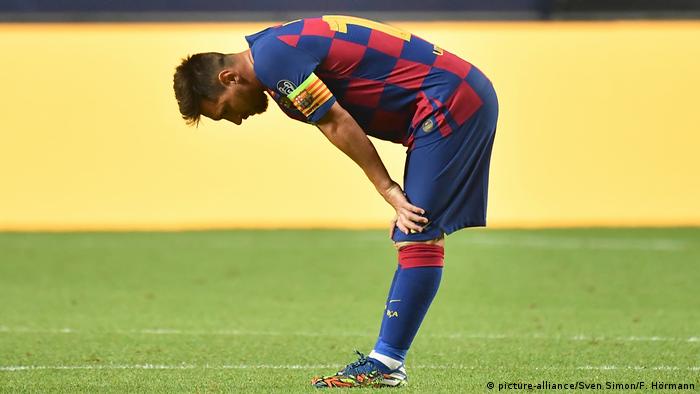 Lionel Messi announced on Friday that he would reluctantly stay with Barcelona until the end of the 2020-21 season rather than face a bitter court battle with the club.

Messi made the announcement in a video interview to website Goal putting an end to days of speculation over his future.

"I thought, and we were sure, that I was a free agent," he said.

"The president always said at the end of the season I could decide if I wanted to stay or not. And now they hold on to the fact that I did not say it before June 10," the 33-year-old footballer said.

"But in June we were still competing in La Liga in the middle of this cursed virus and this illness, that had changed all the dates," he said.

Messi also accused the club's president Josep Maria Bartomeu of not keeping his word of letting him leave for free at the end of the season.

Read more: Coronavirus: How football stars and clubs are helping in the fight

"And this is the reason why I am going to continue in the club... because the president told me that the only way to leave was to pay the €700-million release clause," he said in an interview with Goal.com.

"This is impossible, and then the other way was to go to trial. I would never go to court against Barca because it is the club that I love, that gave me everything since I arrived, it is the club of my life, I have made my life here," the Argentinian said.

Hours after Messi's announcement, the club hailed his decision to stay. The Catalan club highlighted his pledge to give his all for the team by posting a picture of him on Instagram in the club's new kit.

The post was captioned: "I'm going to give my best. My love for Barca will never change."

Messi had expressed his desire to leave Barcelona last week, sparking a contract row with the only professional club he has ever represented.

"I believed that the club needed more young people, new people and I thought my time in Barcelona was over, feeling very sorry because I always said that I wanted to finish my career here.

"It was a very difficult year, I suffered a lot in training, in games, and in the dressing room. Everything became very difficult for me and there came a time when I considered looking for new goals, new horizons," said the six-time world player of the year.

"It wasn't because of the Champions League result against Bayern, I had been thinking about it for a long time," he said, referring to the stunning 8-2 defeat to Bayern Munich in mid-August.

"I wanted to go and it was entirely my right because the contract said that I could be released," Messi said. "I wanted to go because I thought about living my last years of football happily. Lately, I have not found happiness within the club."

The Barcelona captain will return to training next week. "My attitude will not change, for all that I wanted to leave. I will give my best," Messi said on Friday.

He also said his family is happy with his decision to remain at the club he joined as a boy.

"When I told my wife and children about leaving the club, it was a drama," Messi said. "I had the whole family crying, my children did not want to leave Barcelona or change their schools," he added.

Lionel Messi will miss four international friendlies after a lengthy ban from CONMEBOL. The Argentine captain accused the South American soccer governing body of "corruption" during this year's Copa America.

Lionel Messi won't have to serve a custodial sentence after a court in Spain reduced his tax fraud sentence to a fine. He and his father had been accused of avoiding over four million euros in taxes.