The castle in Linderhof Park in Bavaria has welcomed back its famed peacock throne. It took two years to refurbish the flamboyant piece of furniture. 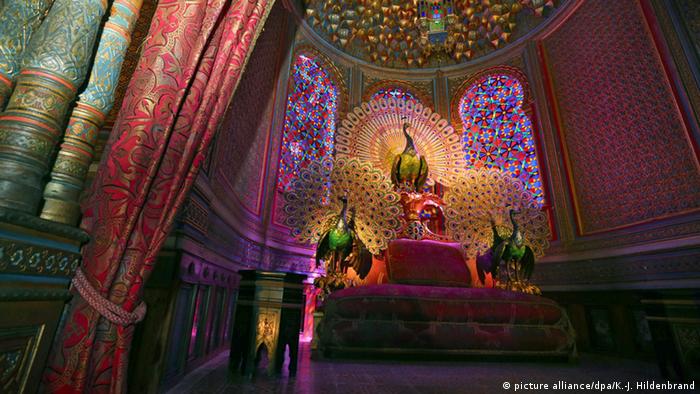 The intrinsic design details of the throne make it one of the most prominent fixtures in the entire estate of King Ludwig II. of Bavaria (1845 - 1886). The peacock throne was reportedly built in 1877 to feature as new centerpiece to the Moorish Kiosk in Linderhof Park. Artisans in Munich and Paris had to make sure that it met Ludwig's expectations.
Three grandiose peacocks adorn a silken divan; its colorful cushions woven with silk and strands of gold while the gilded cast-bronze statues feature Bohemian glass in their feathers, the throne follows Persian and Indian design guidelines. During the two-year refurbishment process, which came to a total cost of 30,000 euros ($33,000), the throne's wooden structures as well as its delicate cushions and upholstery were all meticulously cleaned and restored to their original splendor.
A key feature in the Moorish Kiosk, which designed by architect Georg von Dollmann and showcased at the 1867 International Exposition in Paris, the peacock throne represented the height of the orientalist fashion of its day, which was popular among Europe's nobility.
King Ludwig was renowned for having restless nights, in which he wandered through his various estates in the candlelit darkness of the night. Visitors can also soon enjoy a stroll through Linderhof Park at night on the monarch's 171st birthday on August 25, when Linderhof Park celebrates its King-Ludwig night.