Lima struggles with flooding aftermath | News and current affairs from Germany and around the world | DW | 24.03.2017

Lima is still reeling from the flooding and mudslides that have left Peru's capital in a state of emergency. With more rain predicted, the situation is becoming increasingly desperate as Jurriaan van Eerten reports. 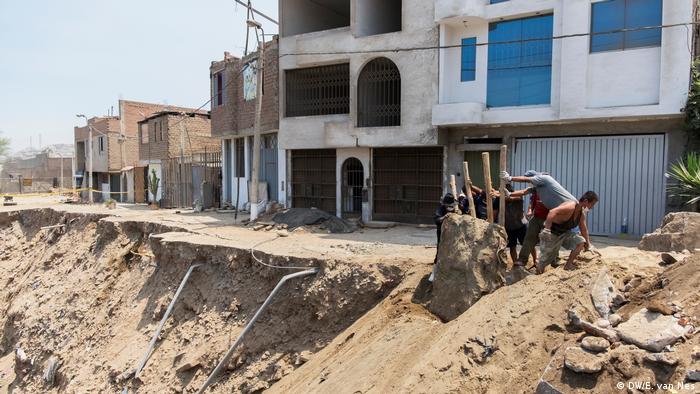 On the bridge Puente de Piedra, 81-year-old Francisco Purizaga looks out over the churning, muddy water of the river Rímac rushing by. The guitar player came to Lima from his home in the northern region of Piura for a concert, but now he's stuck here in the capital. The roads are closed due to the floods and mudslides, caused by extreme rainfall in the Andes, which have left more than half of the country in a state of emergency.

"The river swells every year to a certain extent," Purizaga told DW, while pointing to the roaring brown water coming from the mountains. "But I have never seen it this wild." Purizaga is worried about further rain that would exacerbate the situation

The mudslides have caused yet another problem for the people in Lima: together with plastic waste dragged from the shores, the mud has clogged the filters of the Sedapal water company forcing it to disconnect most of the city from supplies. Water is now brought to certain distribution points by trucks, where people line up with buckets and jerrycans to at least cover their basic needs. In the first days following the water cut, the supermarkets quickly ran out of bottled drinking water - a further crisis in what is already an abnormally hot summer for Lima, home to some 10 million inhabitants.

"Every day we're waiting here for water. Sometimes it comes, sometimes it doesn't," Yoado Merson, 22, told DW while standing in  a queue in the neighborhood of El Agustino. While more affluent areas in Lima were reconnected to the water supply on Monday, Merson's neighborhood is into its sixth day without running water. "There are people suffering a lot. Mothers with children. But for me, I guess you learn to appreciate again what you have after a week like this."

Four blocks further along, dozens of people are waiting in line to get water. Lautaro Arau, 55, says the mudslides and extreme rainfall in the mountains are connected to climate change. "This is what happens because of the industrialization of countries. The weather was never this extreme. Never."

Down the road, a footbridge over the river Rímac has collapsed. Catijara Espinosa, 32, grew up in a house across from the bridge overlooking the water. "The river ate away roughly 15 meters of the shore. I'm afraid to be here; I'm very worried our house will be taken too," she tells DW. Her parents are already staying with relatives elsewhere. Further heavy rains are predicted over the coming two weeks. "The first days the government didn't do anything, just put some stones a bit upstream. They never did anything to prevent this from happening all those years."

Mario Ríos, Vice Minister for the Ministry of Vulnerable People, recently paid the neighborhood a visit to listen to people's concerns. "It's evident the river system and its populations lack protection. We will have to relocate the people living by the river shores, and prepare ourselves step-by-step for climate change. But first [we have to deal with] this emergency," he told DW.

The government and the state-run water company have tried to be pro-active in their emergency response, sending out text messages urging people to "use your water responsibly when it comes back," and "Your government is working continuously on the emergency. Please stay calm."

However, for many the government has failed to deal with the emergency. Alejandra Cruz, columnist at the left-leaning newspaper La Republica, wrote scathingly that "the nearly 100,000 victims, 75 deaths, 157,000 homes affected and 157 collapsed bridges are the painful figures left so far by the curse of corruption and mismanagement."

"If we Peruvians don't help, who will?" 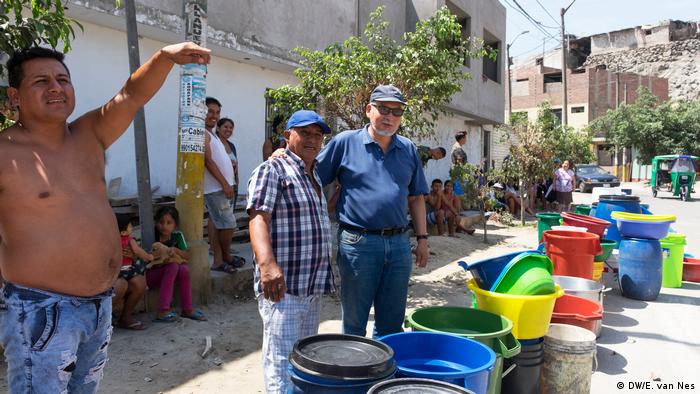 Waiting for something to happen

At different locations around the city, the government has set up collection points for donations, manned by volunteers. From toilet paper to second-hand clothes and bottled water, everything is collected, put into boxes and sent to those most affected, although some hard-hit areas are very difficult to reach because roads have been washed away by mudslides.

The donation points have drawn people from all walks of life. Industrial engineer Valeria Seli, 26, stands together with a few volunteers by the side of a road in the upscale neighborhood San Borja, with a cardboard sign urging people to donate. She shouts at cars passing by.

"If we Peruvians don't help, who will?" she asks. "Help is always important, but now a lot of people have lost everything they had. So, it is very important we all give a hand. If you don't have a lot, it doesn't matter. We have to donate, we all have to help for this cause."