Highly unusual rains have followed a series of storms along Peru's northern coast after a period of severe drought. There has been an unusual warming of sea surface temperatures off Peru’s northern coast by five to six degrees up to 29 degrees Centigrade (84 degrees Fahrenheit.)

The rains have caused many rivers in Peru to overflow and triggered mudslides on the steep Andean hillsides.

The weather forecast is for more rain in the coming days and weeks.
Read: Peru hit by worst floods in decades

"We need more and better bridges, we need highways and cities with drainage systems," said Chavez. "We can't count on nature being predictable." said General Jorge Chavez, who is coordinating the government's response. The army has been deployed to help police in the 811 cities that have declared an emergency.

The National Emergency Operations Center said 99,475 Peruvians had lost everything since the beginning of the year, while 626,928 had suffered less serious damage to their homes.

The warming of sea temperatures in the Pacific, known as "El Nino" is expected to last through April. 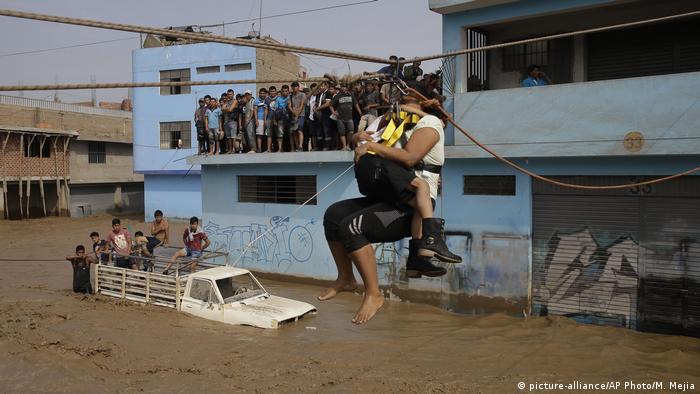 The majority of people affected by the extreme weather are poor, including many who built makeshift homes destroyed in the floods. The drainage systems in cities along the Pacific coast is poor and there is a growing risk from mosquitoes which carry diseases such as dengue.

President Pedro Pablo Kuczynski has promised 720 million euros ($774 million) in emergency aid from the government. "We must help each other in solidarity with those who are victims," Kuczynski told reporters.

Earlier, the president said "There hasn’t been an incident of this strength along the coast of Peru since 1998."

Lawmakers from across the political spectrum said they would avoid clashes with the executive so the government could focus on helping the victims of the floods. The President's popularity had recently suffered under a massive graft scandal, sparking heated fights with the opposition.