Storm clouds rolled in, players were pulled off the course, and fans told to seek shelter — but that didn't stop lightning strikes from showering debris onto spectators. In the past, similar strikes were fatal. 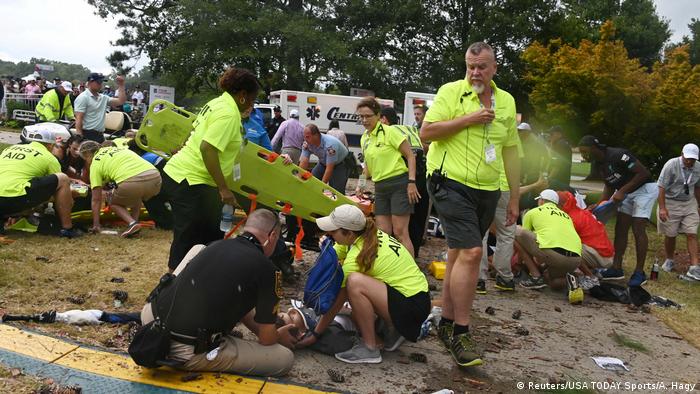 The third round of a prestigious golf championship in the southern United States was suspended Saturday after six spectators were injured as a result of lightning strikes.

Organizers of the PGA Tour Championship in Atlanta, Georgia, halted play at around 4:17 p.m. (2017 UTC/GMT) as thunderstorms moved into the area, the association said in a press release.

Two trees were struck by lightning 28 minutes later. "One strike occurred near the maintenance area, while another struck a tree near the 16th tee. Debris from that strike injured six people."

The statement said that five individuals were transported to area hospitals after being treated by paramedics while one was treated and released on-site. The injuries did not appear to be life-threatening, it added.

The organizers suspended play for the day after the lightning strike. The round will resume at 8 a.m. on Sunday.

"Forecasting the weather, the safety that goes along with it, that is critical to us," said Tyler Dennis, the PGA Tour's chief of operations.

Golf tournaments have become vigilant about stopping play and asking fans to seek safety after two spectators were killed in the US in 1991 in two separate incidents.

In cases of inclement weather, players will be escorted off the course and back to the clubhouses. Scoreboards will ask fans to evacuate the course and take shelter, but they are left to their own devices to do so. 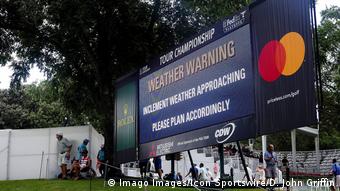 Scoreboards at the PGA Tour Championship warned of approaching storms

"When we suspend play, we encourage everybody to leave and take shelter anywhere they can," Mark Russell, the PGA Tour's vice president of Rules & Competition, said. "We opened up hospitality areas that are grounded, a lot of other places like that."

The PGA Tour Championship is one of the final events in the golf season. The winner will take home $15 million (€13.3 million) in prize money.

When play was suspended, American Justin Thomas was leading his countryman Brooks Koepka and Northern Ireland's Rory McIlroy by one stroke.

The fourth and final round will be also be played on Sunday immediately following the end of the resumed third round.

Ten people were injured, including five children, when lightning struck a family celebration in the German state of Saxony-Anhalt. Some of the partygoers had been holding onto metal tent polls when the lightning hit. (29.07.2018)