An emotional Tiger Woods was followed and cheered on by a jubilant crowd at the 18th hole at Atlanta's East Lake Golf Course. The 42-year-old golfer played like his old self and racked up his 80th PGA Tour title. 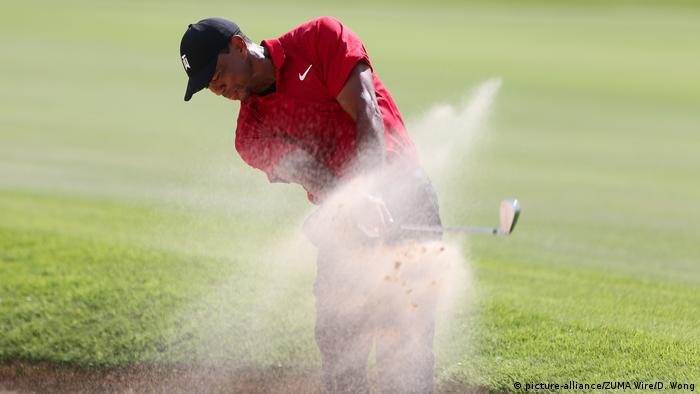 With a two-shot win at the Tour Championship in Atlanta, legendary US golfer Tiger Woods clinched the comeback he longed for, after a near two-year absence in the sport and a championship drought of more than five years.

Sunday's win at Atlanta's East Lake Golf Course is the 80th PGA Tour title of his remarkable career and proved that Woods is still able to compete at the highest level, having recovered from four back surgeries that left him uncertain about whether he would play again.

"I just can't believe I pulled this off," an emotional Tiger Woods said of the win. "It's been tough. I've had a not-so-easy last couple of years. I've worked my way back. I couldn't have done it without the help of all the people around me."

"I was having a hard time not crying coming up to the last hole," Woods said.

The 42-year-old delivered a powerful performance reminiscent of his old days. The crowd was wild with excitement in anticipation of the win, coming in through the ropes and walking behind him, just as it had been at his breakout win at the 1997 Masters.

Woods led the final round throughout, starting out with a three-shot lead, and finished 11-under-par at East Lake. His opponents Rory McIlroy and Justin Rose were unable to challenge him.

With the win Woods maintained his record of never having lost after leading by three shots or more going into the final round and it puts him just two wins away from the all-time career-championships record held by Sam Snead.

The victory elevates the 42-year-old in the rankings to number 13 in the world. Up next, Woods will compete for the US team in the Ryder Cup in France, beginning on September 28.

European captain Thomas Bjorn has opted for experience by selecting four previous winners, including Sergio Garcia, as his wildcard picks. Bjorn follows the lead of US captain Jim Furyk, who called on Tiger Woods. (05.09.2018)

A 22-year-old man has been charged with the murder of Celia Barquin Arozamena at an Iowa golf course. Iowa State University mourned the loss, calling her an "acclaimed golfer with a bright future." (18.09.2018)