Former Chinese Premier Li Peng has died in Beijing. He was best known for leading the violent military crackdown on pro-democracy protesters at Tiananmen Square. 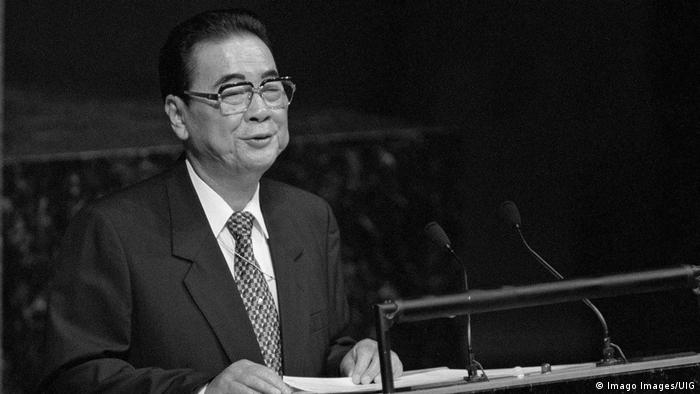 Former Chinese Premier Li Peng, known as the "Butcher of Beijing" for leading the violent military crackdown on Tiananmen Square protests, died late Monday night of an "illness," state media reported on Tuesday. He was 90.

News agency Xinhua called him a "seasoned and loyal soldier of Communism, a distinguished revolutionary and statesman, and an outstanding leader of the party and country."

Li, who served as premier from 1987 to 1998, declared martial law to quell the June 1989 student-led protests. Alongside the Chairman of the Central Military Commission Deng Xiaoping, he also ordered the bloody military response that left hundreds dead.

Xinhua said that "under the strong support" of Deng, "Comrade Li Peng took a clear stand and together with most of the comrades of the Political Bureau of the Central Committee, took decisive measures to stop the unrest and pacify the counter-revolutionary riots."

Although much of the responsibility for the crackdown fell to Deng, the violence also damaged Li's image on the international stage.

"He stirred up anti-protest sentiment among party veterans and with Deng Xiaoping (the country's de-facto leader) so that they would see the movement as a threat," Sarah Kirchberger, a sinologist at the University of Hamburg told DW.

Born on October 20, 1928 in the southwestern province of Sichuan, Li was left orphaned at the age of three when his father Li Shuoxun, an early Communist revolutionary, was captured and killed by the nationalist party Kuomintang.

He joined the Communist Party in 1945 at the age of 17 and later went on to study hydroelectric engineering in Moscow, where he was Chairman of the Chinese Students Association in the Soviet Union.

He returned to China in 1955 after the Communist Revolution and was intricately involved in a number of major power projects until 1979.

Throughout the 1980s, Li rose through Communist party ranks, taking on a number of roles including Minister of Power and being elected to the Politburo before becoming a member of the powerful Standing Committee leadership body in 1987.

He championed the Three Gorges Dam project on the Yangtze River and oversaw groundbreaking of the dam in 1994. The project was a massive feat of engineering that became part of his legacy — but also forced 1.3 million people to leave their homes due to the dam's massive reservoir.

During much of the 1990s, Li was the second highest ranking Communist Party official after its chairman and Chinese President Jiang Zemin.

From 1998 to 2003, Li was chairman of the Chinese legislature, the National People's Congress.

Many pro-democracy activists fled China after the Tiananmen massacre, but they continue to support dissidents from abroad. With Beijing intensifying its crackdown on civil society, the movement faces new challenges. (03.06.2019)