The eastern German city of Leipzig has been gaining attention as a hub for young, creative people, and it’s even been called the new Berlin. But can it actually dethrone the capital? 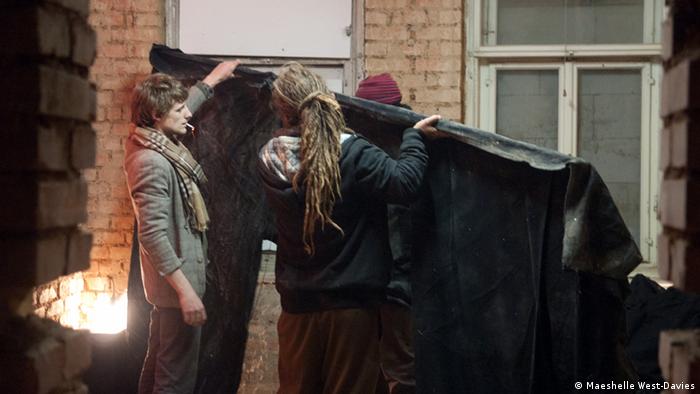 At the Spinnerei art space in Leipzig's western quarter of Plagwitz, original elements - like the brick smokestack and rail lines running down the central avenue, combined with the clean, white studio and gallery spaces - reflect a distinct feeling of revival.

A cotton mill that was active around the turn of last century, the rambling compound had fallen into disrepair by the time it was taken over by a group of artists in the mid-1990s. Having hosted the likes of Neo Rauch, today the Spinnerei is gaining renown as a space for cutting-edge artists from across Europe and elsewhere.

With its high concentration of alternative projects occupying the once abandoned buildings of this old industrial quarter, Plagwitz has become the focal point for the city's alternative scene. Leipzig's extended process of revival continues to garner attention - so much so that some say it is dethroning Berlin as Germany's cool cultural Mecca.

Especially after German reunification in 1990, vast expanses of Leipzig - particularly the old industrial areas in the western neighborhoods - were deserted as people moved to western cities with more economic opportunities. That, in turn, created more opportunities here.

Gorsy describes the art scene in Paris as packed and competitive. But in Leipzig, it took only one week for her to find somewhere to show her work. "Because there is space and everybody is open-minded to just take your project and say, 'Yes! Why not?'" she said.

"I really find my place easily as an artist and a creator," Gorsy told DW. "I feel free to just think, and make. And I know that here I can make what I want," she said of Leipzig.

Florent Pieplu, also from France, had lived in Leipzig for a few years before recently founding an artists' space in an old building that was purchased for a pittance. Pieplu praised the city's affordability - but that's not the only thing making it so attractive for creative people.

"Leipzig is something else, Leipzig has soul," he said. 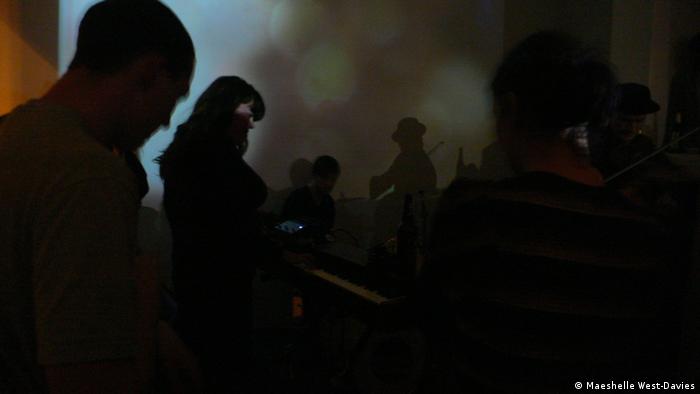 Leipzig is a free place, Pieplu echoed Gorsy, adding that it retains an element of trust that he links to its leftist past.

Neither Gorsy nor Pieplu are interested in making tons of money; rather they're focused on living their art in the present. And in Leipzig, the present won't last forever. Pieplu sees the golden days for Leipzig's creative scene as numbered.

"You have to come to a place, make a free space, and then when it's finished, you have to go," he said. "Berlin was like that 10 years ago, Paris was like that in the 50s, and that's the way. Because then come people with money."

Just down the street from the Spinnerei, Sascha Horlbeck works at a combination bar and bicycle repair shop called Dr. Seltsam. Inside, fixed-gear bikes dangle from the walls as bartenders serve up drinks.

Horlbeck, who co-founded the locale, said the idea started with his bike courier friend. "What do you do as a bike courier? Well, tinker with bicycles and drink," Horlbeck said. 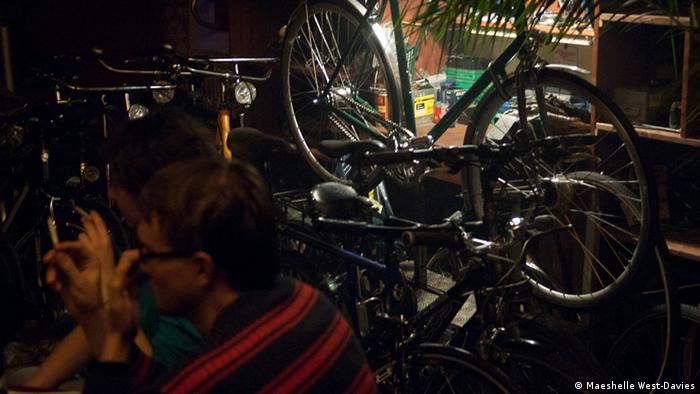 Pop in to get your bike fixed and down a beer at Dr. Seltsam

Horlbeck said the alternative projects concentrating in Leipzig and Plagwitz emerge more out of enthusiasm than a desire for commercial success. "It's a non-material notion - to create something that's cool for everyone, and that's fun," he said.

And since Plagwitz has become a draw for young people who want to party, Dr. Seltsam, like many of the other alternative projects in Leipzig, has been doing well enough for those involved to make ends meet in the affordable environs.

Another thing that makes Leipzig distinct from Berlin, Horlbeck added, is its comfortable size and proximity to nature. "Half an hour by bicycle and you're at a lake, in nature, it's totally beautiful," he said.

At the Vleischerei, a vegan kebab shop in Plagwitz, co-owner Kristoff Liebers agrees that Leipzig is quite different from Berlin.

The Vleischerei, like the Spinnerei and Dr. Seltsam, is another of the many alternative projects in the western part of the city. "In Leipzig there are a lot of creative people who carry out their good ideas," Liebers said. The abandoned buildings here offered up a lot of space for this, though it's gradually filling up, he added. 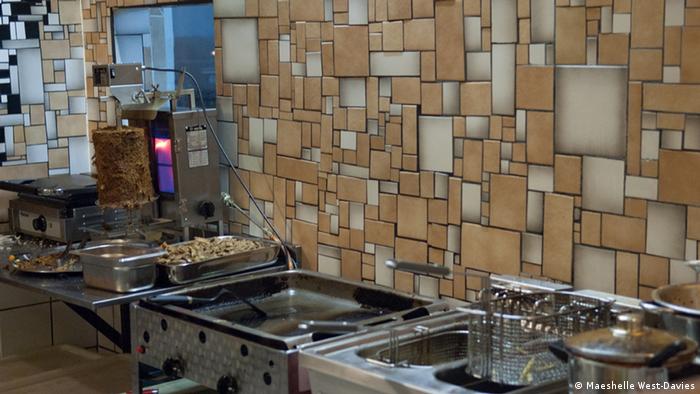 A meatless kebab? Try one at the Vleischerei

Liebers told DW that the Leipzig scene first started drawing hipsters, then yuppies, and is now in a transformation process.

But something that sets Leipzig apart from Berlin, he continued, is that many people in Leipzig actually purchased the properties for their alternative projects. This was made possible in part through an organization called Haushaltverein, which sets up special lease terms for creative projects and helps negotiate property purchase agreements.

Also known Wächterhäuser (guarded houses), these spaces allow people to realize their visions. In the case of Liebers and his partners, it's a vision of an egalitarian work environment offering cheap, vegan food. 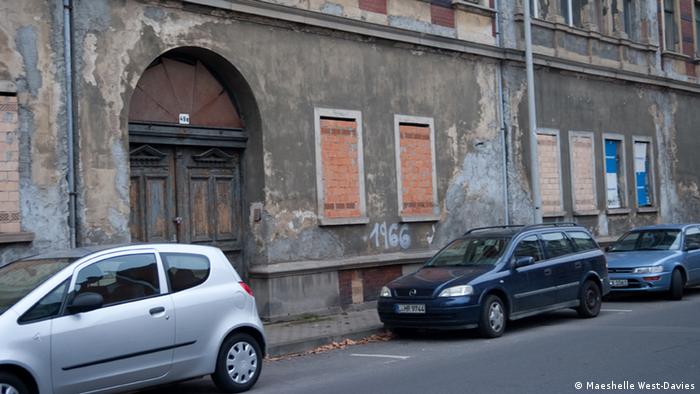 Connect on the street

Kitty-corner from the Vleischerei, Dominik Renner, a social worker who moved here from Bavaria in southern Germany, works at an urban garden called Annelinde, which is oriented toward schoolchildren and the unemployed.

The space was a former brewery that burned down and stood vacant for 20 years. "It was just a dog toilet, and so we rented it from the city for one year and made the urban gardening project on it," Renner said.

The property is getting sold and their lease is running out, so Annelinde is working with the city to secure a new space. Compared to Berlin, Renner sees Leipzig as an especially socially oriented city which runs at a slower pace.

"The time doesn't go as fast as in Berlin," Renner said. "You have the time to get connected and participate in other projects." And a lot of this connecting takes place in public spaces, he added.

"You're drinking your beer or taking a walk around and you always meet some friends, some guys you know - you always stay in the street and talk to each other," Renner said.

Renner is aiming to build Leipzig into a sustainable city through the urban garden project, which connects with the art scene by providing cheap, locally grown, gourmet hors d'oeuvres for exhibition openings, like at the Spinnerei. 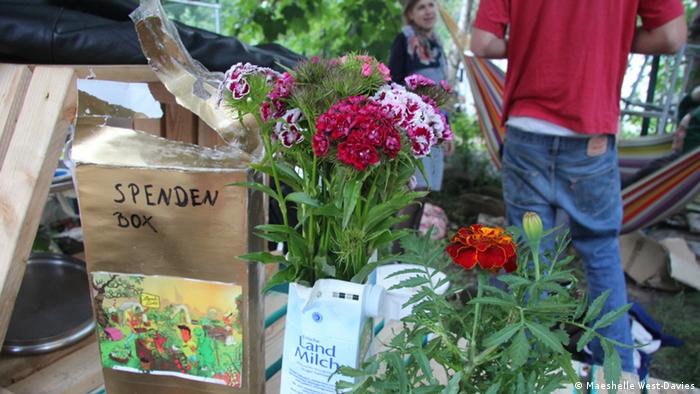 Berlin was once the darling of the alternative scene in Europe. But the German capital has experienced an extended process of gentrification that has jacked up rents, pushing out many of the people who made it cool in the first place.

Leipzig, with its burgeoning alternative scene, has been compared with the German capital. It could be that Berlin refugees are coming to Leipzig not only to get away from its negative aspects, but also to be at the cool new place.

Leipzig is smaller, more relaxed, more intimate - yet brimming with cultural vitality. The only thing that's missing, some locals say, is the mix of international cultures that can be found in Berlin. But as Leipzig continues to remake itself, that may come as well.

Though the city is brimming with alternative art, music, and social projects, that doesn't make it the new Berlin. Leipzig is unique - and for the people who choose to live here, Leipzig is better than Berlin.

Germany's fast-food favorite takes on the US

Germany's most popular fast food is actually modified from Turkish cuisine. Now Americans are developing a taste for the snack - or at least the spicier, fluffier Americanized version. (28.12.2012)

Berliners spoiled for choice during holidays

It's not a city normally associated with Yuletide cheer, but Berlin actually has more Christmas markets than anywhere else in Germany. Are any of them any good? Jefferson Chase went out for a wander. (07.12.2012)

Out and about in Spanish-speaking Berlin

Berlin's Spanish and Latin American community has been rapidly expanding for years. From great tasting Mexican food to lessons in the art of the Spanish language, DW's Andrew Bowen has been reaping the benefits. (02.11.2012)

It's a magnet for creative people looking for the alternative scene - some are calling Leipzig the new Berlin. DW takes a closer look, in pictures.