The tripping of a police officer in Germany's eastern city of Leipzig during New Year's violence has resulted a conviction against a street artist. Clashes in a left-wing suburb led to a federal row over policing. The officer — running through a side street on New Year's Eve during a large police deployment in Connewitz, a Leipzig suburb known for its left-wing activism — had been tripped, suffering arm and ankle injuries despite protective clothing.

Presiding Judge Uwe Berdon said he accepted the accused's apologetic statement that he was not opposed to the police presence and had committed "colossal foolishness" while under the influence of alcohol.

The police officer injured on New Year's testified that while running he saw the tall, curly-headed male accused out of the corner of his eye.

"And then I tumbled — as has already been said — pell-mell onto the ground," he told the court.

Prosecutors said the convicted artist had had nothing to do with an alleged attempted murder during the Connewitz unrest of another 38-year-old police officer, whose attacker has not been identified. 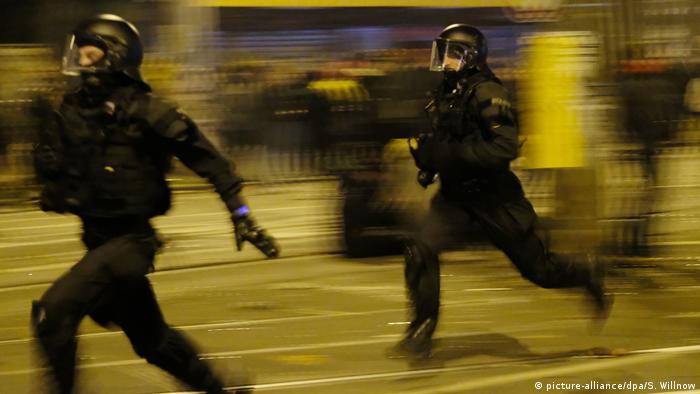 Connewitz, January 1: Police at an intersection during New Year's clashes

Shortly after midnight on New Year's, police said a squad was barraged with fireworks by a group of people pushing a burning shopping cart. Ten people were arrested.

Juliane Nabel, a member of the ex-communist Left Party in Saxony state's assembly, said the violence against police was unjustified but criticized police tactics and communications on the night in Connewitz.

Leipzig, a city of nearly 600,000 and the largest in Saxony state — with its capital in Dresden — is an epicenter for rival subcultures on both the far left and far right.

In October 1989, Leipzig was the scene of decisive demonstrations against the former German Democratic Republic's (GDR) communist regime that resulted in the fall of the Berlin Wall the following month.

Leipzig also hosts a major annual book fair and from the mid-19th century was a hub of trade unionism.