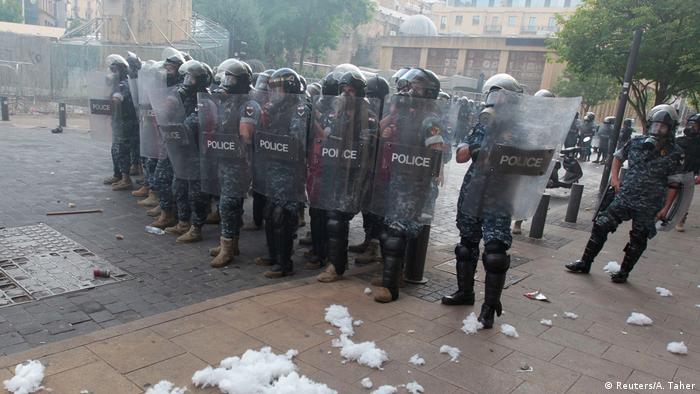 Violence flared in Beirut on Saturday during the country's first anti-government protests in months, prompting the army to intervene. The army reportedly fired in the air to contain the protesters.

This was the first time that residents, who have been demonstrating since last year, have taken to the streets since coronavirus curbs were imposed in mid-March.

Clashes also broke out between some anti-government protesters and followers of the Iran-allied Shiite Hezbollah movement. Stones were thrown between the two groups, forcing the army to intervene and separate the factions.

Read more: Lebanese FM Hitti: 'We have to save our country'

Supporters of the political wing of the Shi'ite Islamist group Hezbollah, which is also represented in the government, chanted: "Shiite, Shiite" at the protesters.

Many Lebanese people are angry at the government's handling of the country's economic crisis which has caused its currency to lose half its value and sparked soaring unemployment. The COVID-19 lockdown has exacerbated hardships for the public.

Some also want Hezbollah to be disarmed. Hezbollah is the only group to have kept its weapons since the end of the Lebanese civil war in 1990. This has created deep political divisions in the country.

The Lebanese Red Cross tweeted that 37 people were wounded in Saturday's violence, with most of them treated at the scene.

'We want a better life'

Saturday's protest was called for by grassroots organizations and civil society groups as well as political parties. The influx of political aims and anti-Hezbollah slogans have upset some activists and protesters who say the focus should remain on addressing the country's economic woes and calling for early elections.

Before violence broke out, people gathered in Beirut's Martyr's Square, chanting: "We want a better life."

"We do not want a corrupt system and politicians to rule us anymore," said Mona Ashour, a protester who came with her two children.

Anti-government protests toppled the previous government, and Prime Minister Hassan Diab — who is backed by Hezbollah — was approved by parliament in February. However, many Lebanese say he has failed to find solutions to the country's problems.

Read more: Lebanon: From the penthouse to the outhouse

Lebanon remains one of the world's most indebted countries — equivalent to 170% of its GDP.

Diab's government is in talks with the International Monetary Fund for an economic reform program it hopes will secure billions of dollars in financing and spark a recovery.

Lebanon: Fact-checking during the corona crisis

In Lebanon, the Maharat Foundation has launched the fact-checking website “Fact-o-meter" with an aim to analyze fake news and provide the public with reliable and objective information . (07.05.2020)