The new government won a vote of confidence on its program that aims to haul the country out of a devastating economic crisis. Prime Minister Najib Mikati said IMF talks are now a necessity and "not a choice." 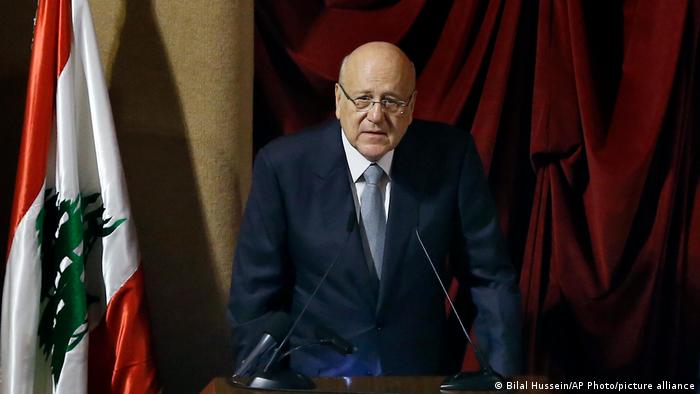 Najib Mikati's cabinet and its manifesto were overwhelmingly approved by lawmakers

Tasked with overhauling the country's economy following a 13-month political impasse, Mikati's government has vowed to revive talks with the International Monetary Fund (IMF) and initiate reforms that potential donors want to see before they will unlock badly needed foreign aid.

"We will start with the IMF. This is not a choice it is something we have to go through," Mikati said ahead of the parliamentary approval, which came with a majority of 85 over 15.

The vote of confidence came in spite of the parliamentary session being held up for almost an hour when the lights went out due to power shortages.

Parliament Speaker Nabih Berri urged Mikati to keep his remarks brief because of the outages, part of a nationwide energy crisis which has crippled normal life as hard currency reserves have been exhausted.

"From the heart of the suffering of Beirut... our cabinet was born to light a candle in this hopeless darkness," Mikati said, as he read out the new government's proposed policy.

"Let's not bother you and read it all out, let's save time because of the electricity issue," Berri, head of the Shiite party Amal, told the prime minister.

Nevertheless, the session lasted for more than seven hours.

Lebanon is in the midst of a deep economic depression, with fuel shortages leading to few if any hours of state-generated power, leaving people desperately short of supply and largely dependent on privately-run generators.

A caretaker government had been at the helm since August 2020 when the premier and cabinet resigned in the wake of a catastrophic explosion at Beirut's port which killed over 200 people and wounded scores more.

Palestinian groups inside Lebanon are thought to be behind the attack that saw one rocket land on open ground and start a fire. The Iron Dome missile defense system intercepted another rocket.

A raft of new punitive measures has been announced by the US Treasury Department targeting entities providing "financial conduits" supporting Hezbollah and Iran based in Lebanon, Kuwait and China.