Events in Russia and Ukraine haven't yet affected Latvia, but the small Baltic state is already considering alternatives to its natural gas imports from Russia. DW spoke to Latvian finance minister, Andris Vilks. 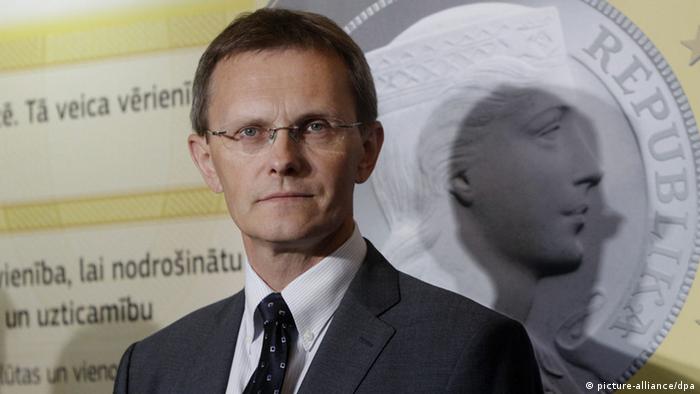 DW: What impact is the Ukrainian crisis having on Latvia's financial and political stability?

Andris Vilks: At the moment, we are not feeling a negative impact from the crisis. We understood that it would last for several years, and as a result, we are prepared.

We have seen various surprises from Russia in the previous two decades, so our entrepreneurs are quite prepared to go to other markets, or quit operations in Russia and Ukraine.

They have a lower GDP forecast: It used to be 4.3 percent per year for this and coming years, now they have lowered it to 4 percent. But the events in Russia and Ukraine still have not had a negative impact on our GDP.

How great is the dependence on Russia concerning energy and other goods?

Russia is our largest export market. But, most of the companies that deal with Russia can sell their goods to other countries as well. Russia is not our only market. As a gas importer, it's a different situation because we are totally dependent on imported natural gas and we are not able to simply select another supply channel. All the Baltic countries are very dependent on Russian gas. At this moment, we are discussing how to vary our supply.

We immediately received strong and positive signals from the US. US troops are present in the Baltic and all the Baltic states are gradually going to increase military spending. We are going to present our so-called "Integrated Smart Defense Approach." That is our response and it is extremely important. With regard to the other issues, we have asked for an additional or alternative natural gas supply. We know that the US would play quite a crucial role because Shell Gas exports are quite huge in the US and the US is going to remain a very important exporter. Strong political and economic support from the US and from other NATO countries is crucial for our society.

You mentioned some temporary measures like joint military exercises. But, would Latvia expect a new, more stable commitment from NATO and the US concerning Latvia and the Baltic states? Are you asking for a new long-term strategy?

Yes, that would be good because currently there are doubts. Since we joined NATO we have requested a strong presence of NATO troops; for instance, military bases in the Baltic states, or in Poland. That was previously not possible, but now, Russia is becoming more and more aggressive and unpredictable, so I think a decision should be made. There should be stronger support for some kind of military base or alternative forms of greater integration.

Are you asking for more sanctions against Russia?

I understand that there need to be some sanctions. But nevertheless, I think there are a lot of options. It's very important to understand that Russia's economy is growing weaker with every year. And this country is too dependent on exporting its goods and importing of a lot of things - including food. Access to money is quite sensitive: money and business are key for Russia. If Russian businesses and investments are excluded from international financial markets, then that would be a huge problem for Russia.

The most important thing is that we share our views and experiences. If there were massive sanctions, the Baltic states would suffer quite a lot and definitely there should be some kind of response because we are not able to get other goods from other countries to go through Latvian ports or use our transportation network. I think that is crucial and there must be other options.

That's extremely important because we would like to trade more with the US. I think it would be one of our options, just to give us more entry into the US market. The Baltic states are very small, but that could be a huge benefit for our exports. With regard to business, that would be one very crucial, very strong response. If we are partners, there should be options to ease conditions for our exports.

Andris Vilks is Minister of Finance of the Republic of Latvia

Former Latvian Economics Minister Krisjanis Karins approves of the move to increase NATO troops on the military alliance's eastern border. Baltic countries need to know they can rely on NATO, he tells Deutschlandfunk. (17.04.2014)

In an interview with DW, former US ambassador to NATO, Ivo Daalder, calls on the military alliance to beef up its troop presence in Eastern Europe. He also explains why Putin is making a fundamental miscalculation. (02.05.2014)