Land mines still a global threat, despite fewer deaths | World | Breaking news and perspectives from around the globe | DW | 04.04.2020 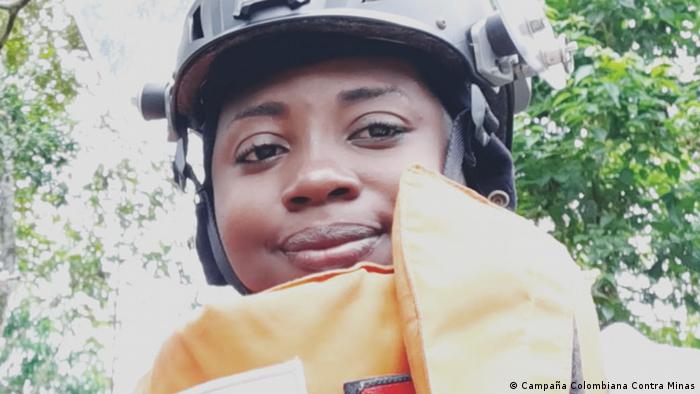 "The worst are those that are buried in the ground. When I found my first mine, I was afraid, tense and full of adrenaline," says Ana Magali Landazuri (top photo), a mine clearer with the Campana Colombiana Contra Minas in South America.

"We're currently working on Bajo Santa Helena, a path through indigenous territory that was plagued by armed conflict. The territory of these people is heavily contaminated with explosive devices."

Such three-week assignments uncovering land mines are one of the most difficult parts of her job, she told DW. The 26-year-old misses her family back home in Puerto Asis, in southwestern Colombia, but the mine clearers are a close team.

"As a woman at work and on the team, I have the same qualifications and do the same job as my male colleagues," she said. "Men are not the only ones doing this job, there are also lots of women like me who work as mine clearers."

Every day is carefully structured for the seven-person unit, which includes a paramedic, a team leader, a supervisor and four mine clearers. Landazuri and her colleagues each work for a 45-minute stretch, then take a 15-minute break. These frequent pauses are necessary to offset the intense concentration needed during mine clearance. The teams work eight hours a day, and while on assignment live in a base camp near the mined area. At the moment, work has been put on hold as a result of the COVID-19 pandemic.

Colombia belongs to a group of countries, along with Sudan, Afghanistan and Cambodia, with a particularly high concentration of leftover mines, according to the International Campaign to Ban Landmines (ICBL). No one can say exactly how many explosives remain in the country's fields and forests, left over from decade of conflict between FARC rebels, paramilitary fighters and armed forces. Often hidden in the undergrowth, the mines continue to make life dangerous for farmers and forest workers.

More than 40 square kilometers (15 square miles) of the Colombian countryside are thought to be contaminated with land mines. That's 40 million square meters, creating a monumental task for the mine clearers who must meticulously search the entire area and remove the deadly devices. Danger is ever-present, but Landazuri hasn't lost her motivation to "help communities facing the fear of living in a minefield."

"Through the process of clearing lands contaminated with explosive devices, I help to avoid accidents. People are free to return to those lands with the certainty that they no longer represent a risk to their lives," she said.

A handful of national and international organizations are working in Colombia to eliminate the tens of thousands of abandoned weapons — land mines, unexploded ordnance and improvised explosive devices — scattered across the countryside.

They support the work of the Geneva-based International Campaign to Ban Landmines, which serves as an umbrella organization of more than 1,200 NGOs in around 100 countries. Founded in 1992 by organizations such as Handicap International, Human Rights Watch, Medico International and the Mines Advisory Group, it aims to completely rid the world of these weapons by 2025.

More than half of all victims of land mine accidents are children, according to the ICBL's latest figures. Boys are particularly at risk, as they're more likely to be allowed to move about freely and spend more time outdoors — herding animals, for instance. Two-thirds of land mine victims survive with serious injuries, but many are left with permanent disabilities.

Jared Bloch, spokesperson for ICBL and the Cluster Munition Coalition in Geneva, said the organization's most recent report found that around 70% of victims were civilian casualties. "In terms of numbers, we are talking about almost 5,000 individuals that were either killed or injured," he told DW, adding "it is certain that the actual number of casualties is much higher."

The ICBL network was instrumental in the creation of the UN Mine Ban Treaty, which was adopted by 89 UN member states in September 1997. A few months later, it was recognized for its efforts with the Nobel Peace Prize. Since then, a total of 164 states have ratified the so-called Ottawa Convention, which entered into force on March 1, 1999.

"All of those countries have unequivocally agreed to prohibit production [of land mines], to get rid of stockpiles, to condemn all use [by] any party in the world and to promote the treaty," Bloch told DW. "And, very importantly, they have all agreed to very specific provisions for supporting mine-affected communities and for providing assistance to victims of land mines."

In the years since the treaty entered into force, many countries have managed to clear their contaminated areas — Burundi, Montenegro and Mozambique among them. The most recent addition to the list was Chile, which reported at the end of February that it had eliminated all its mines.

The men who risk their lives to demine Bosnia

But the problem isn't just limited to standard land mines used by government forces. Rebel groups and militants can create improvised explosive devices for just a few dollars, cheap weapons made from a plastic bottle, a disposable syringe, some explosives and a detonator. These weapons are especially treacherous, because they can remain live for decades and are difficult to locate, in part because they can't be found with conventional metal detectors. Bloch said these devices are especially problematic in Yemen and Iraq.

"It is a huge area of concern, this issue of non-state armed groups — or any group for that matter — fabricating these victim-activated land mines. In 2018, we saw the highest number of annual land mine casualties by improvised mines," he said.

Nevertheless, Bloch said the 1997 treaty does appear to be influencing non-governmental troops, and that land mines have been effectively banned worldwide.

In January, to global outrage, US President Donald Trump reversed his country's ban on land mines, introduced by his predecessor Barack Obama. Instead, he announced the US would be using "intelligent" land mines that would self-destruct after a set time.

Read more: Why Trump is lifting the US land mine moratorium

However, Bloch believes Trump's decision will have little effect on the international treaty, with Washington expected to continue its support for demining activities around the world.

"In dollars and cents, the United States is the largest funder for mine action and demining programs. They fund operators to work on the ground in Iraq, Cambodia, anywhere in the world that is affected by mines, to get those mines out of the ground, to support education campaigns and to make sure that affected communities can move forward," he said.

Along with the US, 31 countries have still not signed the Mine Ban Treaty, among them major players China, Russia, Iran, Israel and Syria. But Bloch still believes the 1997 agreement has achieved more than many other disarmament campaigns.

The Geneva Conventions, the foundation of international humanitarian law, were adopted 70 years ago in the aftermath of World War II. With the changing nature of warfare and modern challenges, are they still relevant? (12.08.2019)

Rape, domestic violence, forced marriages: A new study shows the effects of climate change are leading to an increase in violence against girls and women in many corners of the world. (27.02.2020)