At a meeting with the world's top five economic organizations, German Chancellor Angela Merkel called on the IMF to remain part of Greek bailout efforts as worries about a new debt crisis appeared stronger. 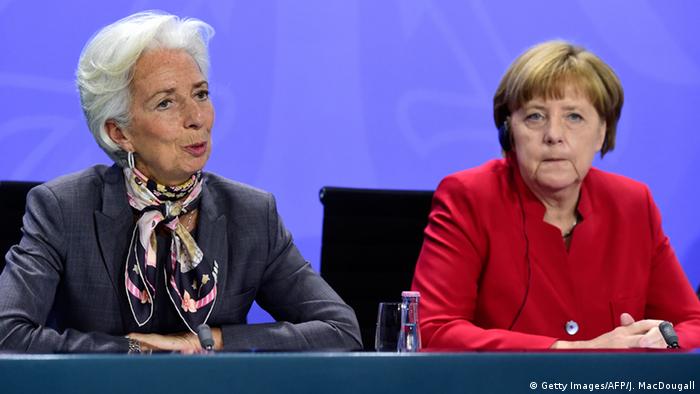 Chancellor Angela Merkel said in Berlin Tuesday that a debt haircut for Greece was not possible as long as the country remains in the eurozone, adding that Germany wanted a quick conclusion of a bailout review.

The IMF has fought shy of participating in the bailout without a firm promise of debt relief for Greece from the EU.

Germany, while keen on the IMF to take part, has said relief cannot be discussed until Athens has demonstrated compliance with the terms of the bailout.

"It is not a demand of the German government to have no haircut but rather in our opinion this is legally not possible in the eurozone," Merkel told reporters in Berlin after meeting International Monetary Fund head Christine Lagarde and other global economic leaders.

"The German position is that the IMF takes part in an agreement ... We want a quick conclusion of these talks," Merkel added.

Prime Minister Alexis Tsipras hopes a successful review, which will unlock an estimated 5 billion euros ($5.7 billion) in bailout funds, will pave the way for talks on debt relief and convince austerity-weary Greeks that their sacrifices are paying off.

The fresh tranche is needed to repay loans from the International Monetary Fund and maturing bonds to the European Central Bank, as well as unpaid domestic bills.

Greece signed up to a bailout worth up to 86 billion euros in 2015, its third international financial lifeline since 2010, which hauled it back from the brink of leaving the eurozone. So far, it has received 21.4 billion of an initial 26 billion euro tranche.

IMF 'determined to continue to help'

On Sunday, Christine Lagarde denied that IMF staff would push Greece closer to default after the leak of a transcript in which IMF officials apparently mooted scare tactics to secure a deal. "We are engaged, we are working together, we had a really good discussion earlier on today with the Chancellor, and we are determined to continue to help," the IMF chief said in Berlin.

Lagarde said that what was needed in Greece was "long-term sustainability, and debt sustainability for Greece is going to matter for private sector investors."

Merkel's government was forced to rule out debt relief again this week following the weekend publication of comments said to be by a top IMF official criticizing Europe's failure to agree to cutting Athens' high debt level.

The IMF is waiting for the results of the review of Greece's progress in introducing reforms before it decides on whether to join the bailout, which was agreed in a bid to help Greece stave off bankruptcy and remain a eurozone member state. Last year, Merkel moved to rally sceptical members of her conservative Christian Democrat-led political bloc to back the Greek bailout in a parliamentary vote by saying that the IMF will take part in the rescue plan.

"The IMF Fund must participate in further aid to Greece" said Volker Kauder, who is a close Merkel ally and parliamentary leader of her political bloc. He told a journalist association in Berlin that the chancellor's parliamentary faction could not agree to further debt reduction for Athens.

Greece is also a frontline state in Europe's refugee crisis, which is adding to the pressure on Europe's most indebted state. The annual meeting between Merkel and the chiefs of the world's key economic organizations was also overshadowed by increased uncertainty about the outlook for the global economy following a slowdown in emerging markets and sluggish growth in Europe.

The Organization for Economic Cooperation and Development (OECD) has called on Greece to implement crucial reforms in its effort to improve stability and recover from a profound social and economic crisis. (10.03.2016)