Kyrgyz state security has detained a leading opposition politician. Omurbek Tekebayev has been accused of corruption and fraud - but critics are calling shenanigans as the country's presidential election looms. 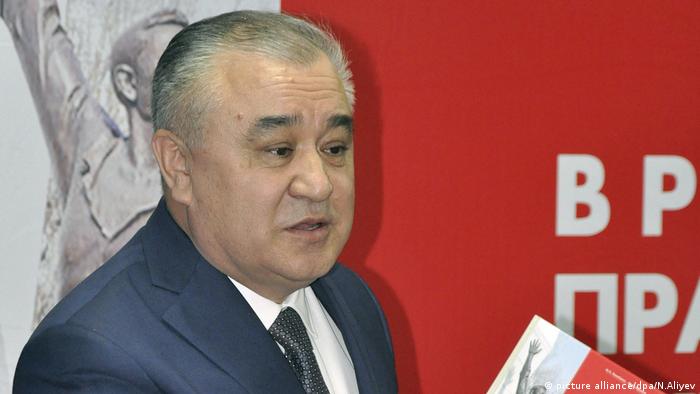 Kyrgyzstan's state security service announced that it had detained Omurbek Tekebayev, one of the country's leading opposition figures, upon his arrival at the Bishkek airport early Sunday.

The arrest has shaken Kyrgyz politics as the former Soviet Central Asian nation prepares for a presidential election on November 19.

"He considers his detention ... unwarranted and illegal and a continuation of political repressions," said Kanybek Imanaliyev, a member of parliament with Tekebayev's Ata Meken (Fatherland) faction. "We planned to hold a party congress within a month and nominate him as candidate."

In a statement, the prosecutor general's office announced that authorities had arrested Tekebayev on suspicion of taking a $1 million (946,835-euro) bribe from a Russian investor in 2010. Then a senior member of the country's provisional government, Tekebayev promised the investor that he could take over a local telecommunications company, prosecutors claim.

President Almazbek Atambayev cannot constitutionally seek re-election. However, his allies in parliament pushed through a referendum on a package of amendments to significantly boost the powers of the prime minister. This has prompted speculation that - although he denies having such plans - Atambayev might either become a powerful cabinet head or install a loyal figure as prime minister in order to retain power in the nation of 6 million people.