Leaders of Iraq's Kurdistan region have renewed their negotiation offer to Baghdad but said they would not cancel the outcome of an independence vote. Kurdish officials also snubbed "military threats" over Kirkuk. 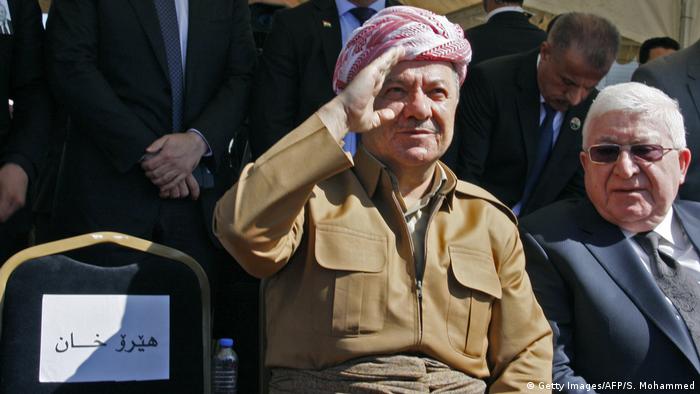 A meeting between Iraqi President Fuad Masum and his Kurdish counterpart, Masud Barzani, was held in Sulaymaniyah after a deadline set by the Iraqi government for peshmerga fighters to surrender expired on Sunday, Iraqi media reported.

After meeting with Iraqi officials on Sunday, Barzani said his government had rejected Baghdad's demand to cancel the outcome of an independence vote and pledged to defend the autonomous region in case of an attack.

Kurdish leaders, however, renewed their offer to resolve the crisis peacefully with Baghdad, Barzani's aide Hemin Hawrami said on Twitter.

"As we announced earlier, we blocked our airspace to the Kurdish region on a request from the central government of Iraq, and as far as I know, nothing new has happened in this area," the Iranian Students' News Agency (ISNA) quoted Foreign Ministry spokesman Bahram Qassemi as saying. 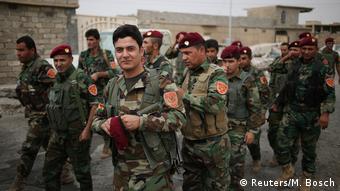 The Kurdish forces were given a deadline of 2 a.m. local time Sunday (2300 GMT Saturday) to surrender their positions and return to their pre-June 2014 positions. Unconfirmed local media reports say the deadline has been extended for another 24 hours.

At the scene, a photographer with Agence France-Presse reported seeing armored vehicles bearing the Iraqi national flag on the banks of a river on the southern outskirts of the city of Kirkuk.

"Our forces are not moving and are now waiting for orders from the general staff," an Iraqi army officer told AFP.

Facing the Iraqi forces on the opposite bank of the river were Kurdish peshmerga fighters.

Tensions between the two allies in the war against the "Islamic State" (IS) have been escalating since a Kurdish independence referendum last month that Baghdad has called "anti-constitutional."

The Kurds overwhelmingly voted for an independent state in the September 25 referendum. 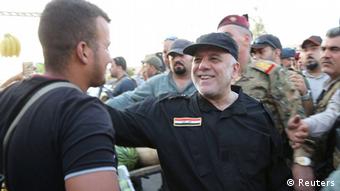 Abadi has repeatedly denied any plans to attack the Kurds

Iraqi Prime Minister Haider al-Abadi demanded that Kurdish leaders annul the referendum vote and called for a dialogue within the framework of the constitution.

After the referendum, the Iraqi parliament asked the prime minister to use armed force to retake control of oil-rich Kirkuk, claimed by both Iraqi Kurdistan and the Iraqi central government in Baghdad.

The Kurdish peshmerga prevented the province's oil fields from falling into the hands of IS jihadis in 2014.

The Kurdish regional government included the disputed oil-rich province in the independence referendum, reflecting the Kurds' historical claim to the area. Baghdad had controlled Kirkuk before IS pushed out the Iraqi army three years ago.

'No plans for a military operation'

Abadi has repeatedly denied any plans to attack the Kurds, insisting Thursday that he was "not going... to make war on our Kurdish citizens."

But thousands of heavily armed troops and members of the Popular Mobilization paramilitary force, formed mainly by Iranian-trained Shiite groups, have taken position around Kirkuk.

Kurdish peshmerga fighters also rejected a 2100 GMT deadline from the paramilitary force to withdraw from a strategic junction south of Kirkuk city, Reuters news agency reported, citing a Kurdish security official. The strategic position north of the Maktab Khalid junction controls access to an air base and some of the oil fields located in the region.

An overwhelming majority of Iraqi Kurds voted for independence in Monday's referendum. But the Iraqi central government in Baghdad is cracking down on Kurdish leaders in a bid to force them to annul that decision. (29.09.2017)

Iraqi minorities have been voting for an independent Kurdish state in a bid for stability and peace. A Kurdish passport and nationality could improve their situation, they believe. Judit Neurink reports from Irbil, Iraq. (26.09.2017)