Kosovo's Constitutional Court has found parts of a deal between Serbia and its former province illegal. The deal has sparked a political crisis in Kosovo. 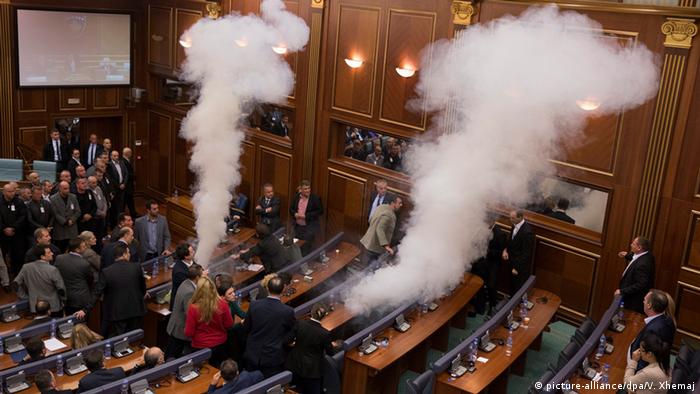 The court ruled on Wednesday Kosovo's minority Serbs would be able to run an association of municipalities as agreed to in the 2013 EU-brokered deal, but that the associations could not have executive rights reserved exclusively for the central government.

In a key ruling, the court also suspended a decision last month to stop implementation of the deal.

The deal between Serbia and Kosovo is designed to grant greater autonomy to Serb-minority areas largely in the north of the ethnic Albanian-majority Balkan country.

The EU-brokered deal has triggered a political crisis in Kosovo, with opposition lawmakers disrupting parliament with tear gas and whistles in an effort to block the deal.

Faced with a paralyzed parliament and street protests, President Atifete Jahjaga referred the deal to the Constitutional Court.

The opposition has also protested a separate deal with Montenegro that cedes a small sliver of territory to its neighbor.

Kosovo separated from Serbia in 1999 after NATO intervened to stop the expulsion of ethnic Albanians by Serbian forces fighting a rebel insurgency. The country declared independence in 2008 and has been recognized by more than 100 states, but not Serbia.

An agreement between Serbia and Kosovo is viewed as a key step in normalizing relations between the Balkan neighbors as well as advancing their integration with the EU.

No Future: Young people in Kosovo