Kosovo marks fifth year ahead of EU-led talks with Serbia

Majority ethnic Albanians in Kosovo have marked the fifth anniversary of their declaration of independence from Serbia with a military parade in Pristina. Ethnic Serbs in the north still contest Kosovo's authority. 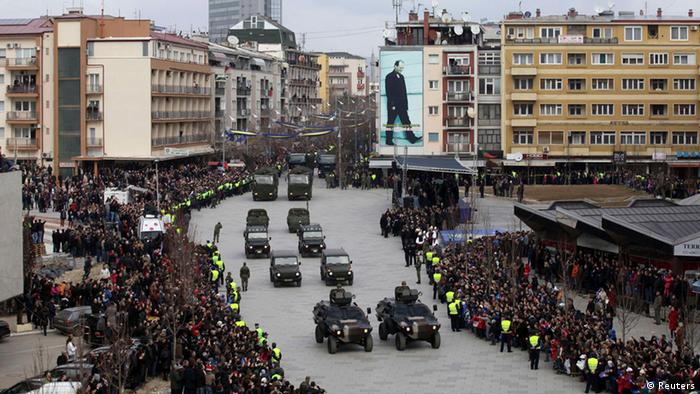 NATO still has a 6,000-strong peacekeeping force in Kosovo and Serbia remains under pressure from the European Union to cooperate with its former province. Since its unilateral declaration of independence in 2008, Kosovo has secured recognition from nearly 100 countries, but not from key Serbian ally Russia, a permament member of the United Nations Security Council. Kosovo therefore needs Russian approval to join the UN.

EU-led talks which began nearly a year ago are due to bring together the presidents of Serbia and Kosovo, Ivica Dacic and Hashim Thaci, for a second round of consultations due in Brussels on Tuesday and Wednesday.

A fragile peace in Kosovo

A fragile peace in Kosovo

Spurring those talks is the prospect of another ex-Yugoslav republic, Croatia, joining the EU on July 1.

Dacic on Sunday said it was an "illusion" to believe that Kosovo was "truly independent" but added that solutions "would emerge from reality."

On Saturday, Thaci had said that Pristina hoped that the EU-led talks would "soon" lead to Serbia recognizing Kosovo - despite objections among 120,000 Serbs living inside northern Kosovo.

In a rare address made in the Serbian language during a parliamentary session in Pristina on Sunday, Kosovo President Atifete Jahjaga told local Serbs that "Kosovo's independence is your independence."

"This is your homeland also that you will be proud of," Jahjaga said. "Let's extend a hand of cooperation to the Serb community here … for the sake of a peaceful future," she told parliament.

Independence euphoria has worn off in Kosovo. More than a third of its 1.8 million people live in poverty. Unemployment stands at 40 percent and organized crime and corruption are rife, despite policing efforts.

Economist Isuf Olluri was quoted by the French news agency AFP as saying that "the past five years have not brought any progress or positive developments that would give a meaning to this [anniversary] day."

US-educated information technology engineer Gazmend Gjonbalaj told Reuters that Kosovo's young people still had hopes but it was "shameful that our politicians are driving around 50,000-euro cars while much of the population does not have enough food on the table."

Last week, the EU published a scathing report on Kosovo's failure to fight organized crime and corruption and implement the rule of law.

On Sunday, US Secretary of State John Kerry sent a message calling on authorities to keep "building stronger democratic institutions" and to continue working towards what he termed "Kosovo's European integration path".