South Korean television series are having surprising successes on streaming services in India. The phenomenon has even prompted many Indians to learn Korean. 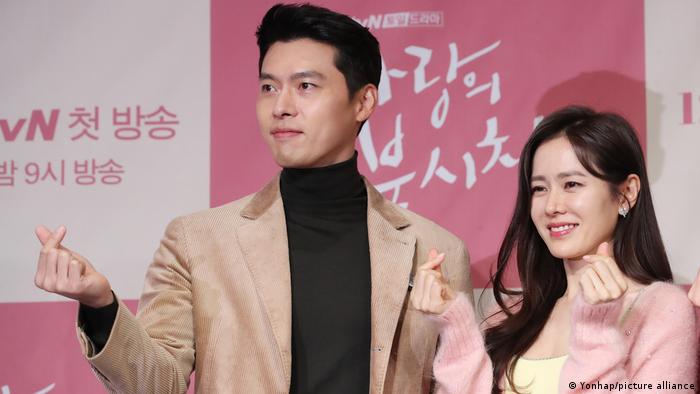 But nothing could have prepared her for the world she entered after clicking on the Netflix icon for Crash Landing on You, a hugely popular South Korean television series.

"I had almost run out of things to watch when my best friend pushed me to give this show a shot. This was my initiation into the K-drama world," Shroff, a popular beauty and lifestyle YouTuber in India, told DW.

Crash Landing on You was released in December 2019, but it wasn't until March 2020 that it became a cultural phenomenon in India — a development that not many could have anticipated.

The show is about a paragliding mishap that "drops a South Korean heiress in North Korea, and into the life of an army officer, who decides he will help her hide."

Over the past decade, Korean dramas and music — better known as K-pop have driven a global phenomenon sometimes called the "Korean wave."

In India, the subculture commanded a niche audience. Students and young people from the country's northeastern states felt inspired by the romantic storylines, the cuisine, as well as the fashion choices of the star-studded casts.

Prior to the rise of streaming services such as Netflix and Amazon Prime, there were limited options available to view Korean dramas.

The process typically involved trying to access a number of shady websites and waiting for a single episode to buffer — only to be confronted with substandard subtitles.

The game changed with Netflix’s latest push to bring South Korean content to the world. Now, a wider range of shows can be easily accessed by a larger audience.

During the coronavirus lockdown, Crash Landing on You beat several domestic hits and made it to Netflix's top 10 in India.

"I have watched a number of regional shows in the past, but the difference here is that you can't just watch one Korean show and stop there. It takes you in: the culture, the lifestyle, the similarities it bears to our values in India, and finally, the dreaminess of it all," Shroff said.

Shroff soon noticed that her Instagram followers were having conversations about K-dramas under her posts. So she decided to set up a Facebook group for fans.

Sherry's K-Drama Club is a Facebook group for people who want to share Korean film and series recommendations, give reviews, or simply gush over celebrities such as Lee Min-ho or Park Seo-joon.

The group is comprised of people who have been watching Korean dramas for over 10 years when they weren't as easily available, as well as newcomers who watched their first K-drama during the lockdown.

Some have watched more than 300 shows, while others are just wrapping up their first series.

"It is a judgment-free space to talk about anything related to K-dramas — things we like, things that didn’t work for us, issues like the importance of family or even sexism," Shroff said.

According to the YouTuber, K-drama is not just entertainment that you consume with your eyes and ears.

When viewers watch a Korean show, they want to eat the food the characters are eating, they want to drink the drinks along with the protagonist. 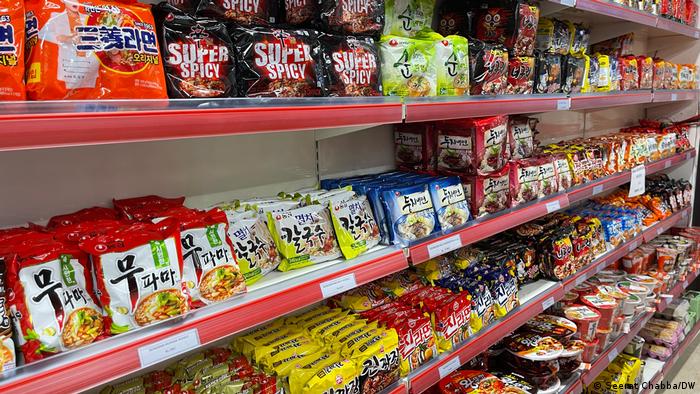 "It is packaged as a deep dive into the culture as a whole," Shroff said. "The recall value is strong because there are recurring elements across dramas — the ramyun (Korean spicy noodles), tteokbokki (spicy rice cakes), mandu (dumplings) and soju (alcohol)."

This has led to an increased demand for popular Korean food items across India.

"We have seen a sharp increase in the number of Indian customers over the past year," Subhash Kukreja, who owns a specialty store that caters to East Asian food in India's northern city of Gurgaon, told DW.

Standing in front of a wall stocked with dozens of different ramyun brands and flavors, he said: "Korean spicy noodles are a favorite with our local customers."

Shroff has been watching Korean shows for nearly a year and says everyday Korean words are now a part of her vocabulary.

Interest in learning the Korean language has seen an uptick in India as the popularity of Korean pop culture surges.

Some people are taking the extra step to learn the language by enrolling in professional programs or using apps.

The New Delhi-based Korean Cultural Center India (KCCI), an offshoot of the Korean Embassy, runs numerous courses for people who want to learn the language. In response to burgeoning demand, the center decided to host an online "Korean Language Hobby Class."

The speed of enrollments was overwhelming. In under two minutes, 600 people had registered for the class, forcing the center to close the registration.

"Korean language has been solidified by India's New Education Policy in 2020 as a recommended foreign language," Hwang Il-yong, the director of KCCI, said in a press release.

"We are in discussion with the CBSE (Central Board of Secondary Education) for the best ways to expand Korean language education in Indian schools in 2021," Hwang said.

The organization is also setting up both online and  face-to-face courses in collaboration with the Korean-language King Sejong Institutes located in major cities in India.

As Korean music and dramas make their ways into hundreds and thousands of homes throughout India — a country with a population of over 1 billion people — the Korean wave may have just hit one of the largest potential market jackpots in the world.

From independent films to hit series streaming on platforms like Netflix, South Korean films are capturing audiences around the world. What's behind their success?

India: How are Netflix and other streaming platforms transforming Bollywood? 02.02.2022

From K-pop to the Netflix series "Squid Game" and the Oscar success "Parasite," South Korea's pop culture is conquering the world. What makes it so appealing?