Koblenz: Good For Getting Over Jet Lag

Recovering from a long-haul flight can take some time. Koblenz's handful of sites nearly fill the day but still leave time for a nap before dinner for the jet-lagged traveler. 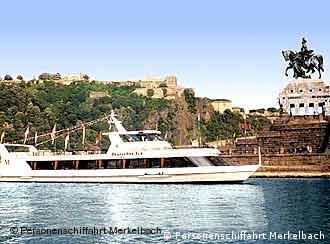 Koblenz's Deutsches Eck is a highlight on any Rhine boat tour

The first day of a long-awaited vacation is all too often nothing but a murky collage of impressions. But a trip to (and a nap in) Koblenz, the only German city on both the Moselle and Rhine rivers, offers a good alternative to stumbling half-asleep though a big city.

Just over an hour train ride from Frankfurt International Airport, the city's landmarks and the region's tasty wines make it an ideal starting point to shift into tourist gear.

Upon arrival, choose between a quick ride on bus line 1, which leaves from the train station, or a 20-minute walk through the city's main shopping avenues and past numerous cafes offering a jolt of caffeine before you arrive at Koblenz's tourist highlight. 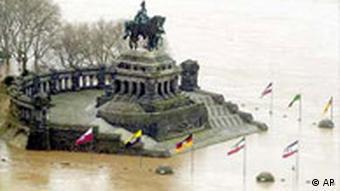 Koblenz's most famous landmark, and much of the town, was flooded in January 2003

Without a doubt, the city's most famous monument is Deutsches Eck (German Corner). The spot where the Moselle flows into the Rhine owes its name to the Teutonic Order of Knights who founded a settlement here in 1216.

Though the bronze replica of Kaiser Wilhelm I -- the original from 1897 was destroyed during the World War II -- seems to fit in perfectly with the 16 flags on the triangular piece of land that juts into the two rivers, the pedestal actually stood empty from 1953 to 1990 as a reminder of divided Germany. It wasn't until 1993 that a the copy was put in place.

Across the Rhine and a short chair-lift ride 118 meters (387 feet) up the river's steep banks, the Ehrenbreitstein Fortress keeps watch from the top of the cliffs. Originally built around the year 1000, Romans, Franks, the French and Prussians all guarded the fortifications that are now home to a state museum and youth hostel.

The view from Ehrenbreitstein reveals Koblenz as a new, rebuilt city. Though the city of 100,000 was originally founded in the ninth century, bombing during World War II reduced the historic center to rubble. The only building left standing was the pink Deutscher Kaiser inn, which is still open to the public.

Plenty to see on the Rhine 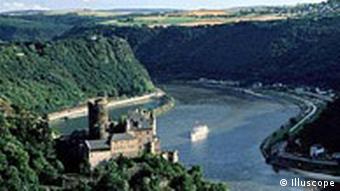 It looks safe now, but the Rhine's Lorelei was the downfall of many sailors

One of the main reasons to visit Koblenz is tied to the Rhine's river banks. That's where the city's ships line up to offer visitors floating tours lasting from one hour to one day.

While the observant traveler may already have seen the vineyards and castles that dot the river's banks on the train ride from Frankfurt, the landscape makes for interesting pictures hard to find anywhere else in Germany and the boat's gentle rocking make it good place for a quick nap. Don't worry, though, the clicking of cameras will wake you up when you get to the famous Lorelei.

According to sailors' legend, it was at this curve in the river that a beautiful woman would lounge alongside the river, combing her long blonde hair, driving the ships' men to distraction and leading them to crash on the rocks below. These days, however, sunburn poses more of a danger than the wide river's rocky bottom.

Rejuvenated and back in town after the cruise, the city's many churches and pedestrian squares are ideal for meandering and the half-timbered houses of the Weindorf (Wine Village) offer an ambiance suited to sampling the region's renowned Rhine and Moselle wines as well as some local gastronomic specialties before nodding off for the day.

The City of Koblenz

Information in English about Koblenz and a virtual guided tour of what the city has to offer.