The world's first kite-powered cargo ship set sail on Tuesday, Jan. 22, from Germany to Venezuela. Its makers hope to prove that using earth-friendly energy can also mean saving a fortune. 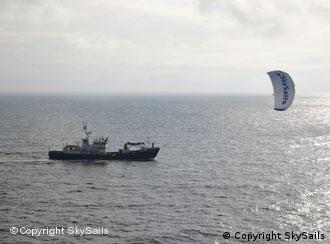 Sailboats are anything but modern -- unless we're talking about the MS Beluga Skysails, which is now chugging across the Atlantic Ocean with the help of a 160-square-meter (1,722-square-foot) computer-controlled kite.

The contraption's inventor, 35-year-old Stephen Wrage, said supplementing the ship's diesel engine with wind power should cut its daily fuel bill by 20 percent -- at a time when oil has exceeded $90 (62 euros) a barrel.

"During the next few months, we will finally be able to prove that our technology works in practice and significantly reduces fuel consumption and emissions," said Wrage, founder and president of the Hamburg-based company SkySails.

The kite, shaped like a paraglider, flies up to 300 meters (980 feet) high to be able to pull the 10,000-ton vessel. It cost about 500,000 euros to make, not counting the five years of research Wrage and his colleagues put into it. 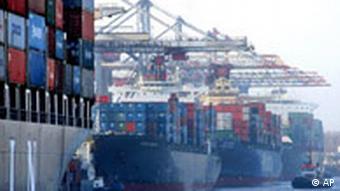 The world's 55,000 cargo ships transport 90 percent of its goods

Though freight ships are the world's most important commercial transport method, carrying 90 percent of all traded goods, they were excluded from the UN's climate agreement, the Kyoto Protocol. Experts have advocated that the industry -- which produced 5 percent of the world's total carbon emissions -- be included in the successor treaty, to take effect after Kyoto expires in 2012.

But as long as oil prices remain high, ship companies already have a hefty incentive to reduce their fuel consumption. Many have already made effective efforts to save fuel by mandating slower speeds in their fleets.

Hamburg-based logistics company Hapag-Lloyd, for example, reduced the standard speed of its ships from 23.5 to 20 knots in the second half of last year and reported "significant savings."

"Before, ships would speed up to 25 knots from the standard 23.5 to make up if time was lost in crowded ports," said company spokesman Klaus Heims. "We calculated that five knots slower saves up to 50 percent in fuel and it had the added effect of cutting carbon dioxide emissions immediately." 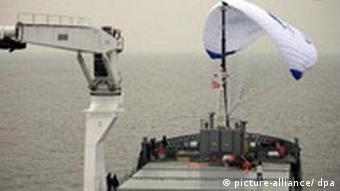 There are lots more ways for ships to push down their fuel consumption and drive up their savings, Hermann Klein from Germanischer Lloyd classification society told Reuters news agency.

Using weather forecasts to select optimal routes, cleaning the ships regularly to remove sediments that would cause resistance and using fuel additives for better performance would benefit the company's budget and the earth, Klein said, adding that opting for slower-speed engines with greater fuel efficiency makes more sense than running high-power engines at a slower pace.

Wrage and his SkySails company, however, expect many shipping firms to choose kite power, should the maiden voyage turn out to be a success.

As oil moved in this week on the $100 a barrel mark, DW's Rolf Wenkel suggests we take the opportunity to wean ourselves off our oil dependency. (22.11.2007)

A German scientist sailed east in a reed boat to prove his theory that ancient cultures made trans-Atlantic journeys against the wind. But the Abora 3 crew, rocked by storms, had to abandon ship after 56 days at sea. (07.09.2007)

With competition for energy resources continuing, some European energy experts who gathered in Germany called liquefied natural gas an emerging power source for the future of the EU -- for economic and political reasons. (30.06.2007)

What do you think is the best way for cargo ships to cut their fuel consumption? Please include your name and country in your reply.