The German president has lauded the monarch for "setting the standard for humanitarianism and humanity." A significant portion of Jordan's state budget has gone into supporting the 656,000 migrants from Syria. 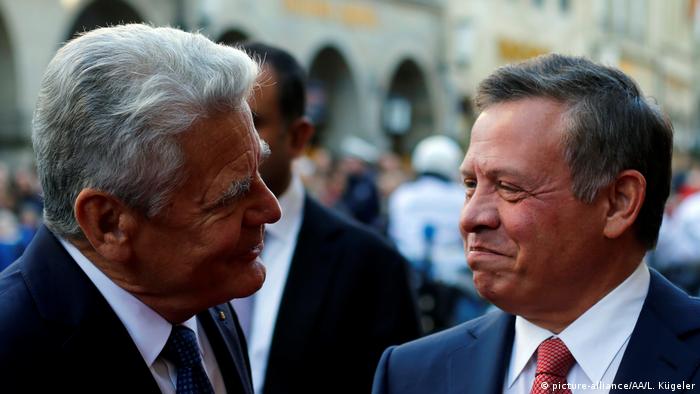 King Abdullah II of Jordan was honored with this year's Westphalian Peace Prize in the historical German town of Muenster on Saturday.

The King of Jordan was recognized for his commitment to peace in the Middle East and his country's migrant policies.

Speaking at the ceremony, German President Joachim Gauck praised King Abdullah II saying, "You and your people have set the standard for humanitarianism and humanity." He also lauded the king for his commitment to finding a two-state solution in the conflict between Israel and Palestine.

Of the almost 5 million refugees that fled Syria, as many as 656,000 are currently living in Jordan. Gauck said that Jordan was an exemplar to other countries hosting refugees. "a significant portion of its state budget was dedicated to helping these people," Gauck said. "Jordan is doing all it can to help, both during current and in earlier conflicts."

On Friday, King Abdullah II commended German Chancellor Angela Merkel's "open door" refugee policy and her government's support of other countries in the region dealing with the flood of refugees from Syria.

At a meeting between the two leaders, the king said the Chancellor's approach to the refugee crisis was a "breath of fresh air," and she raises "the moral bar very high."

Last year, Germany received just under 900,000 refugees. The country has also been a key supporter in providing aid to countries bordering Syria, such as Jordan and Turkey.

The Westphalian Peace Prize has honored distinguished individuals and organizations regarded as role models for promoting peace and equality since 1998. It is awarded in conjunction with a youth prize given to a young individual and youth organization. This year's youth prize was awarded to the Action Reconciliation Service for Peace, a German peace organization that confronts the legacy of Nazism. Both recipients receive a 100,000 euro prize.

The prize remembers the Peace of Westphalia, signed in Münster and Osnabrueck, which ended the Thirty Years' War in the Holy Roman Empire, and they Eighty Years' War between Spain and the Dutch. It marked the first time in European History that a conflict was ended by a diplomatic truce.

A new Syrian-Jordanian deal on energy for Lebanon is being seen by some as another step toward the international rehabilitation of the brutal Assad regime.