Khodorkovsky: Nobody knows where Putin will drag Russia

Vladimir Putin is eager to leave his post after his next term, the Kremlin critic and onetime Russian oligarch Mikhail Khodorkovsky says. He urged Russian voters to send a "message" in Sunday's election. 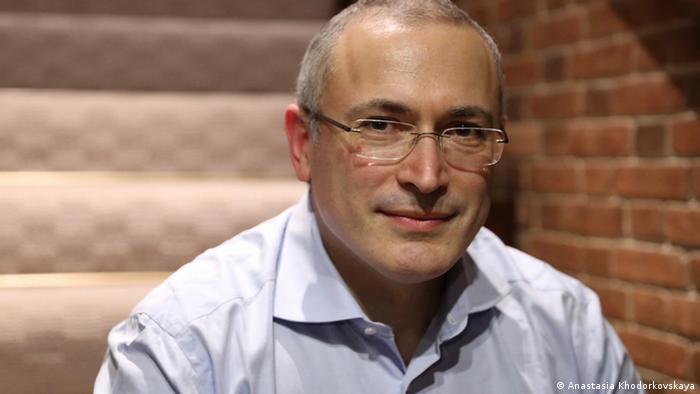 DW: Mr Khodorkovsky, what would you say to those voters who are unsure if they should vote, and don't know who to vote for on 18th of March?

Mikhail Khodorkovsky: I think that it's very important in the current state of Russian society that people who are ready to send a political message do send that message. This is important for the Russian society, and it is also important for every single individual. However, there are different types of messages you can send when it comes to state authority.

If you have someone among the candidates that you are ready to vote for, that is the simplest way to do it: You show up and vote for them. By doing so, you give your candidate additional political capital, even when everyone knows that this is not a real election and that your candidate will never be allowed to win. It is especially useful if you take a picture of your ballot and post it online, because nobody really knows what the electoral commission will do. This way, your candidate will know that he has received a vote.

If you don't support a candidate, you have several other options. You can monitor the vote. This is very important, it is a clear message to the authorities: "We do not trust you. We  don't, because you are criminals, and we want to document it."

You can go out to the street and protest. This is risky. Here [in Germany] it's not risky, but it is in Russia. You might get detained for a certain number of days. But it also a strong political message.

And finally, if you are not ready to pick any of those options, you have a choice between staying on your couch and going to the polling station, crossing out your ballot, writing your political opinion on it. You should then choose the latter option.

We see that TV channels are fully controlled by the government and it affects public opinion. Still, the authorities seem to be nervous about the election. Why?

This nervousness comes from several factors. Firstly, it is the nervousness of officials who believe that they can get "spanked." They themselves don't quite know why, each of them is thinking up their own reasons for it. But this is where the nervousness lies, this is behind all these letter and statements, it is the officials.

Thirdly, thinking people are also nervous. They are nervous because nobody knows what will happen on March 19. So, Putin wins another six-year-term — and then what?

The only new thing he managed to offer in his speech is a suicide weapon. It was not a very optimistic message. Nobody knows in which direction this man would drag the country after stealing his next term.

How many more terms will Putin serve as the president of Russia?

If it were up to Putin, this would be the last term. He, naturally, wants to leave. With every passing year, Putin is getting more and more dependent on the people close to him. His leaving would be very interesting for the country, and Putin, emotionally, would also like to go and name a successor. However, any successor could bring about changes that are incompatible with the lives of Putin's close associates.

Mikhail Khodorkovsky, once the richest man in Russia, was arrested and convicted for tax evasion and fraud in 2003. He spent the next 10 years incarcerated. The rights watchdog Amnesty International declared him a political prisoner. He was unexpectedly pardoned and allowed to go into exile in 2013.

Ukraine: Putin realizes 'there can be no military solution,' Khodorkovsky says 31.03.2022

Mikhail Khodorkovsky, an outspoken critic of Russian President Vladimir Putin, spoke to DW's Konstantin Eggert about the peace talks between the Kremlin and Kyiv, mistakes made by the West, and the future of Putin's regime.