Kherson, Ukraine: Life under Russian occupation | Europe | News and current affairs from around the continent | DW | 11.03.2022

Towns and villages in the Kherson region, under occupation by Russian troops since the first days of the war, have been completely isolated. The behavior of the Russian soldiers has left many citizens puzzled. 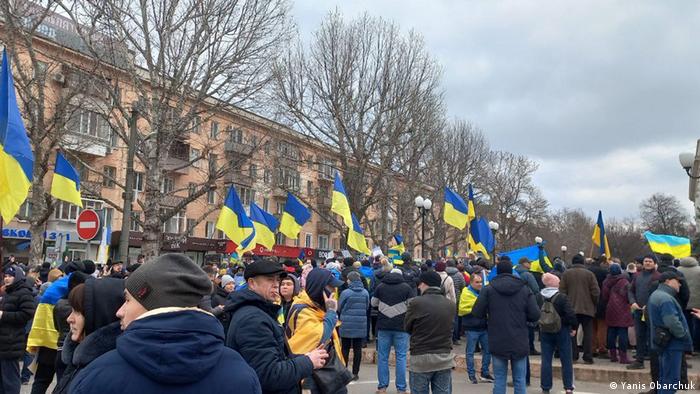 Despite the occupation, people across the Kherson region have been coming out to protest the presence of Russian troops

"We are not giving up, we are part of Ukraine!"

This defiant phrase rings out daily in the streets of towns and villages of the Kherson region. The area in southern Ukraine has effectively been under Russian occupation since the first days of the war against Ukraine. But people in the city of Kherson, and in Nova Kakhovka, Kakhovka, Hola Prystan, Skadovsk, Oleshky, Henichesk, Novotroitske and Chaplynka, have been peacefully protesting against the presence of Russian troops, saying they weren't invited and should just leave.

"We had another rally yesterday. More than 5,000 people came, all carrying blue and yellow flags," said Yevhen Ryshchuk, the mayor of Oleshky. "People sang the anthem and signed appeals to the US president and European heads of state, asking them to close the airspace over Ukraine."

Isolated from rest of the country

The situation is similar in all these towns and villages. They've been encircled by Russian troops who, for the most part, control the roads in and out but stay outside. The only exception is Nova Kakhovka, which stretches along both banks of the Dnieper River and is home to a hydroelectric power plant. There, Russian troops can be seen on the streets of the city center.

The Ukrainian flag continues to fly in every municipality, where the authorities are still taking care of local concerns.

"We have electricity, gas, water, the communal services are working," said Oleksandr Yakovlev, mayor of Skadovsk. "People and volunteers have organized themselves into associations to prevent looting. We can only contact the central state power authorities by phone. But how can they help us now?".

"There are big problems with logistics. People can't pick up their pensions at the post office, because no money has been delivered."

Skadovsk is located some 30 kilometers (about 18 miles) from the administrative border with Russian-occupied Crimea, and 100 kilometers from Kherson. Unlike other parts of the country, Skadovsk hasn't really seen any fighting. It was besieged in the first hours after the initial attack on February 24 by Russian troops, who immediately set up checkpoints everywhere, said Yakovlev.

"People are being let through, but their cars and identity papers are checked. Civilian vehicles have also come under fire, and there have been victims. Yesterday, they shot at an ambulance, but there were no casualties," said the mayor. On the morning of March 9, Russian armored vehicles drove directly into the city and positioned themselves in front of the city hall, but did nothing else.

'There is no one to talk to'

Both mayors said they hadn't been contacted by the Russian military, which had not made any demands. They suspected that the soldiers themselves did not know what to do with the occupied territories. In any case, said the mayors, the Russian troops had not been received with flowers by the locals, as Russia's top leaders had expected.

Volodymyr Kovalenko, the mayor of Nova Kakhovka, has set up a temporary office in a municipal utility building because the town hall has been occupied by the Russians, who are using it as their headquarters. Kovalenko said they had appointed an administrator, and imposed a curfew.

"The town is under the control of the Russian army. I make sure that life goes on somehow," said Kovalenko. He said he only makes contact with the occupiers through his deputy — and only when he needs help with a problem he can't solve himself, such as making a trip along the road over the power plant dam, which is also under Russian control. He added he was trying to get food delivered to residential districts.

Other mayors have no contact at all with the Russians, including Mayor Ryshchuk in Oleshky. He said there were more than 100 bodies lying on a bridge over the Dnieper River, which connects his town with the city of Kherson. No one has been allowed to go recover the bodies of the civilians and Ukrainian soldiers killed in the fierce fighting, not even priests or volunteers.

"There is no one to talk to," said Ryshchuk. "People are constantly changing at the checkpoints. Who is there to negotiate with?"

Enough supplies to last another 10 days

Agriculture is one of the region's industries, meaning the locals still have access to food staples. Farmers from the surrounding areas have brought vegetables and meat into the cities. Defunct mills are being repaired so that they can supply bakeries with flour and oil.

But fuel and medicine, especially for cancer patients, is scarce. "The food in our warehouses will last for another 10 days. But we have no extra supplies of medicine, fuel and lubricants. What we have will only last for one or two more days," said Kovalenko. 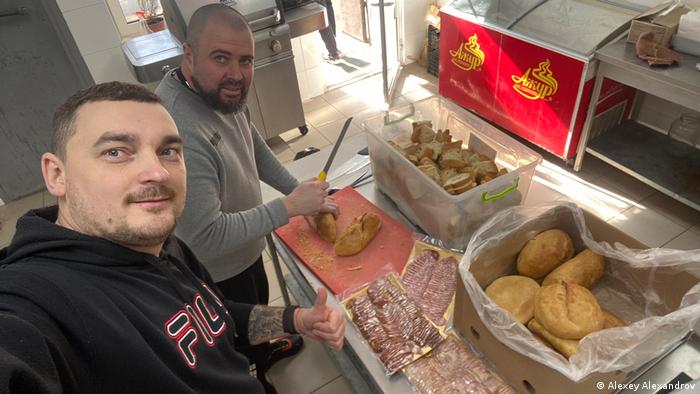 In Kherson and other towns in the regions, volunteers have been providing food for locals

The mayors set aside fuel reserves for municipal vehicles and ambulances. But when these run out, life in these towns and villages will likely be completely paralyzed — and no one knows what will happen next.

Parts of the region no longer have mobile phone coverage. But people still have access to Ukrainian television broadcasts, even though the transmitter tower in Kherson has been occupied by Russian troops. Many people also have satellite dishes, and others are able to get information via the internet.

"People here are very pro-Ukraine. This staged show, with Russian humanitarian aid being distributed in front of Russian TV cameras, doesn't work with the people here," said Anton*, an activist from Henichesk, adding that pro-Ukraine rallies with thousands of participants would show the Russians that they're not welcome. 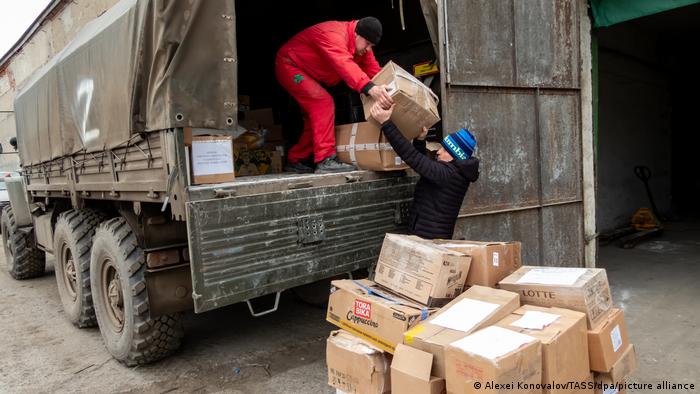 "The Russian soldiers told us they had not come as conquerors. But in the meantime, they have threatened us by saying if they're provoked, they'll raze the town to the ground," said Anton. He said many residents wondered why such a large part of Kherson region had gone to the Russian army without a fight. But they hoped Ukraine would soon regain control over its territory.

Meanwhile, according to the Ukrainian Armed Forces, units of the Russian National Guard have been deployed to the region, and more than 400 Ukrainian citizens were arrested in the region on Wednesday.

This article was originally published in Ukrainian

*DW has changed the activist's name to protect his identity

Russia has seen anti-war demonstrators take to the streets from the day the invasion of Ukraine began. So far, more than 13,000 protesters have been arrested. They won't be silenced.

Western arms supplies for Ukraine: How are they getting there?

In an unprecedented move, the EU is financing the purchase and delivery of arms and weapons to Ukraine. Other Western countries are committing to arms deliveries, too. But how will they get there and how quickly?