Saudi operatives allegedly murdered Jamal Khashoggi in October, sparking an angry response from many lawmakers in the United States. Some of the agents are US-trained, according to a report in The Washington Post. 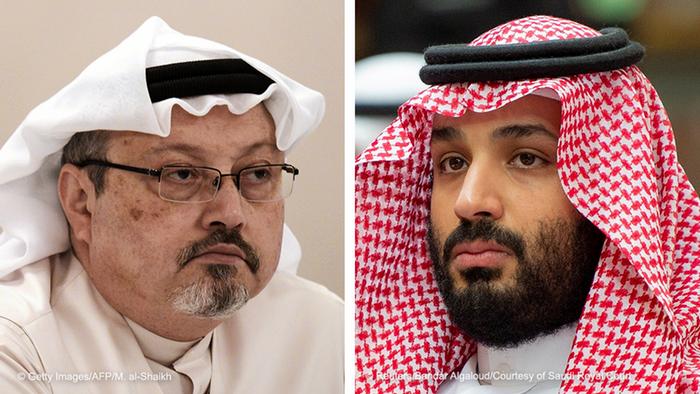 Several of the Saudi agents who were involved in the killing of Jamal Khashoggi in Saudi Arabia's consulate in Istanbul last year had received training in the United States, the Washington Post reported Saturday.

Post columnist David Ignatius said US and Saudi sources told him that the training occurred before the killing "as part of ongoing liaison" between the US and Saudi Arabia, but that it has since been halted.

The leader of the team that killed Khashoggi was Maher Mutreb, a colonel in the Saudi intelligence service who comes from a "wealthy and respected Saudi family." Mutreb allegedly received training in the US and developed a "friendly" relationship with Khashoggi while they were both working in London.

Ignatius said other members of the 15-person team allegedly also had US training, without elaborating.

'This will not blow over'

The scandal allegedly prompted the US to suspend several security programs, including wide-reaching efforts to modernize Riyadh's intelligence agencies. US State Department and Congress also placed obstacles for US contractors trying to sell technology to the oil-rich kingdom, according to Ignatius.

US officials worry that the powerful Crown Prince Mohammed bin Salman has "become a Saudi version of Saddam Hussein, an authoritarian 'modernizer,'" he added.

Ignatius' article also claims to reveal new details on Khashoggi's final minutes inside the Saudi consulate in Istanbul and the team behind the killing.

It points to the prince's former aide, Saud al-Qahtani, who until recently coordinated Riyadh's covert operations, as the mastermind. Turkish prosecutors asked for an arrest warrant on Qahtani in December due to a "strong suspicion" that he was among those who planned the murder, but Saudi Arabia said it would not extradite him.

Khashoggi, a Saudi national, entered the Istanbul consulate on October 2 to complete paperwork needed for his wedding plans. Khashoggi's capture and final moments were apparently captured by a bug placed inside in the building by Turkish intelligence.

A Saudi source who read the transcript of the recording said it indicated that the team was originally dispatched to kidnap Khashoggi and bring him back to Saudi Arabia to be detained and interrogated.

According to the transcript, Khashoggi entered the consulate and told Mutreb that he would not return to Saudi Arabia with him. He then screamed, likely while being grabbed.

A note in the transcript says that Khashoggi was given an injection, apparently a powerful sedative, by forensic doctor Salah Tubaigy from the Saudi Interior Ministry.

The operatives then placed a bag over Khashoggi's head, while he yelled: "I can't breathe. I have asthma. Don't do this." He died soon after.

The cause could have been a sedative overdose, choking or asphyxiation, but it remains unclear. The audio transcript refers to a buzzing noise, possibly from an electric saw used to dismember the body, being heard shortly thereafter.

In the days following Khashoggi's disappearance, Saudi Arabia denied any knowledge of his whereabouts, but then said he had died following a "fistfight" on the consulate premises.

Eventually, under international pressure, Riyadh admitted that Khashoggi was killed, but dubbed it a rogue operation. Saudi prosecutors later charged 11 people for the murder, but did not announce their names.

Saudi Crown Prince Mohammed bin Salman still refuses to admit that he was involved in the grisly killing. The strategic partnership between the US and Saudi Arabia in military and intelligence issues is likely to remain in limbo until the prince "provides some real answers," according to Ignatius.