Top US diplomat John Kerry has stated that the Minsk peace plan could be fulfilled in the coming months, allowing sanctions on Moscow to be lifted. The Russian economy has been shaken by the embargo and low oil prices. 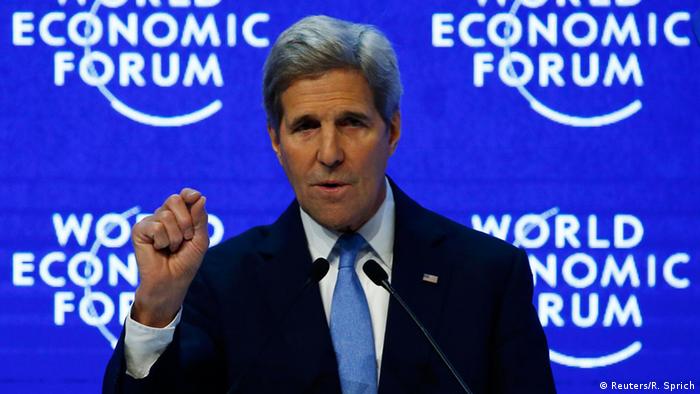 Speaking at the World Economic Forum in Davos on Friday, the US Secretary of State commented on the areas of cooperation between Washington and Moscow and the peace effort in east Ukraine.

Kerry and US Vice President Joe Biden discussed the implementation of the Minsk peace plan with Ukrainian President Petro Poroshenko during the Davos conference, he said.

"And I believe that, with effort and with bona-fide legitimate intent to solve the problem on both sides, it is possible in these next months to find those Minsk agreements implemented and to get to a place where sanctions (against Russia) can be appropriately, because of the full implementation, removed," Kerry said.

Kyiv and Moscow remain at odds

The US and the EU announced the sanctions against Moscow in the summer of 2014, in response to the separatist uprising allegedly backed by Russia. The restrictions have mostly targeted Russia's banking, energy and defense sectors.

In December 2015, the EU prolonged its sanctions for another six months, saying that the Kremlin has failed to fully comply with the Minsk accord.

US officials have also linked the lifting of the embargo with the peace effort.

Many elements of the Minsk deal have already been put into action, including a break in fighting and withdrawal of heavy weapons. However, Moscow and Kyiv continue to trade blame for the unresolved issues, which include local elections in the rebel-held areas and greater autonomy for the separatist regions.

Moscow accuses US of 'provocations'

The Russian economy has been struggling to absorb the losses caused by the Western sanctions, with the low oil prices and falling ruble adding to the instability.

The EU has also been facing increasing pressure from some members to ease the sanctions and allow European companies to do business on the Russian market.

Despite the positive signals on the economic front, relations between Moscow and the West remain strained.

On Friday, Russian Foreign Ministry accused the US of spreading anti-Russian propaganda and conducting "provocations" against Russian diplomats, according to Reuters news agency. The barb follows the US decision to withdraw the credentials of five Russian honorary consuls.

Only a day earlier, a UK probe indicated that the Kremlin "probably approved" a murder of an ex-KGB agent. Moscow rejected the findings as a "joke."