Citing security concerns, Kenya has vowed to close its refugee camps which house 600,000 mainly Somalis. Many countries and international organizations have criticized the move. Kenyan citizens are split on the issue. 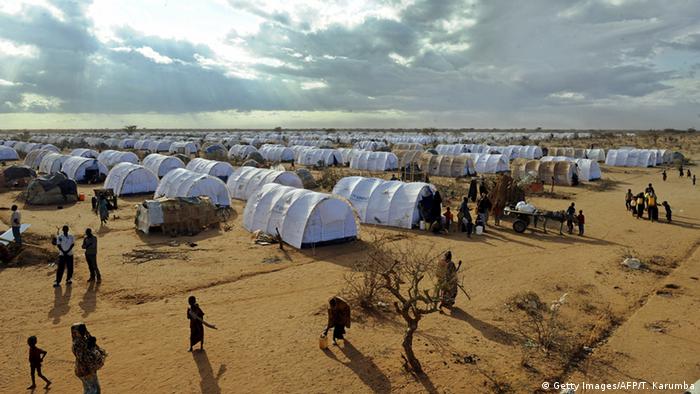 The Kenyan government has announce that it will push through plans to close one of the world largest refugee camps located in the northeast part of the country. The move, which has triggered much debate inside and outside of Kenya, was put forth as a measure to combat insecurity and terrorism.

The government said that the perpetrators of the terrorist attacks on the Westgate Mall in Nairobi and Garissa University either came from the camps or used them for planning. 214 people were killed during the two attacks which al-Shabaab, a terrorist group based in Somalia, claimed responsibility for.

The Daadab Camp, situated 100 kilometers from the Kenya-Somali border, is home to almost 350,000 refugees, almost all of whom are of Somali origin. It was originally established to temporally accommodate 90,000 people who fled war in Somalia in 1991. Together with the inhabitants of Kakuma Camp, in the far northwest of the country, more than 600,000 people will be repatriated to their countries of origin or sent to a third-party country for resettlement.

According to UNHCR, 60 percent of those affected are children younger than 17. For a majority of them, Daadab is not only a camp but a home and the only place they have known. Many Somalis who were born in the camp have since gotten married there and now have the kids of their own.

Using the hashtag #DadaabShutdown, thousands of Kenyans have been debating the move. Deeq Ahmed, a Somali boy who lives in the Daadab Camp, pleaded with Kenya not to go through with the plan.

"I'm among those who were born in Daadab refugee camp. My only home is Kenya and I have never seen Somalia. Most of my people are not there, so retuning refugees to their home is not a solution. Kenya government must think more and respect the rights of the refugees," said Ahmed in a comment on the Facebook page of UNHCR.

Refugees are not the only ones who are raising their voices to condemn the move. Peter Santoni works at the University of Nairobi.

The government has made a series of statements in response to the criticism of its plans stating that their move is based on their need to protect the Kenyan people.

Kenny Kaburu from Nairobi wrote that if the camp is closed as promised, Kenya and the whole region of East Africa should be prepared to handle the consequences.

However there are those who believe that closing the camp is a wise decision. Khadija is a Kenyan woman of Somali origin.

Can it be implemented?

Kenya is a signatory to the 1951 UN Refugee Convention which forbids the involuntary return of refugees to a country where they face persecution. The country also passed its own law in 2006 that protects refugee rights.

Some Kenyans think that their government should focus on the real enemy of security which is corruption. They believe that even if Daadab is cleared by the end of this year insecurity will continue.

The controversial decision raises the question of how Kenya will manage to repatriate people to their countries when those areas are still engulfed by war and violence. Somalia, South Sudan, Ethiopia and Burundi are among the countries whose people live in the camps.

A thousand hills and a dramatically transformed country

Africa's elite is meeting in Rwanda's capital Kigali for the World Economic Forum on Africa. It is a good place to examine what economic success looks like because Rwanda is practically top of the class. (12.05.2016)

Kenya’s battered tourism sector receives a 'shot in the arm'

Kenya will soon begin to reap the positive effects of its aggressive tourism recovery campaign. From July, a weekly European charter plane will be flying tourists to the coastal region. (10.05.2016)