A court in Nairobi has sentenced one man to life in prison and two others to 41 years for abetting the second deadliest attack in the country's history. The 2015 attack at Garissa University left at least 148 dead. 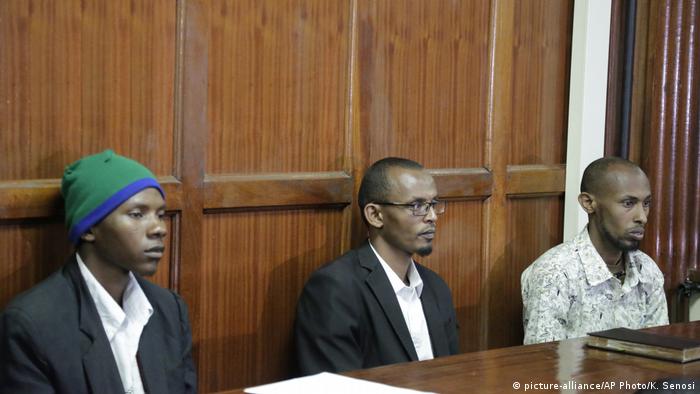 Three men found guilty last month of being members of the al-Shabaab terror group and accomplices in the second-deadliest attack in Kenyan history were given long prison sentences in a Nairobi court on Wednesday.

Rashid Charles Mberesero, a Tanzanian who represented himself before the court, was given life in prison, while Mohamed Ali Abdikadir and Hassan Aden Hassan, both Kenyan, were each sentenced to 41 years in prison.

The men were found to have been in constant telephone contact with four attackers before they rounded up students and faculty at a university in the city of Garissa in the early morning hours of April 2, 2015, shooting those who were not Muslims.

The gunmen were killed by security services, but not before they had executed at least 148 people.

'Let them rot in jail'

Mberesero's longer sentence was attributed to the fact that he was found hiding at the university during the time the attack took place, whereas the others were off site.

Mbugua Mureithi, a defense lawyer for Abdikadir and Hassan argued for lighter sentences for the two, saying, "These men were not at Garissa University on the fateful day, they never pulled the actual triggers of the actual guns."

But relatives of the victims, such as Duncan Kandie, whose sister was killed in the attack, said the men were no different than the gunmen: "They killed her and they killed many others. They are terrorists, and terrorists have no place in society. Let them rot in jail."

Another relative whose brother was killed in the attack said they should have been hanged. Kenya does have the death penalty, though it has not executed anyone since 1987.

Mohamed Mohamud, a former teacher at a Koranic school in Garissa, and suspected of being behind the university attack, was killed by US forces in Somalia in 2016.

Deadly neighbors with an axe to grind

The men were members of al-Shabaab, a Somali-based terror group with links to al-Qaeda.

Al-Shabaab regularly launches attacks in neighboring Kenya in retaliation for Nairobi's involvement in an African Union operation that drove the group out of the Somali capital Mogadishu in 2011.

Though al-Shabaab only controls small pockets of countryside in Somalia, it remains committed to overthrowing the internationally backed government in Mogadishu.

The group was responsible for the 2013 Westgate Shopping Mall attack in Nairobi, which killed 67 people, and a January attack on a luxury hotel in Nairobi that killed 21.

The deadliest attacks to ever take place on Kenyan soil were carried out by al-Qaeda on August 7, 1998. In all, 224 people were killed in nearly simultaneous truck-bomb attacks on the US embassies in Nairobi, and Dar es Salaam, Tanzania.

A truck bomb in the heart of the Somali capital, Mogadishu, has claimed more than 250 lives. The attack is one of the most deadly in the decade since the start of an Islamist insurgency. (16.10.2017)