At least 70 people have been killed after masked gunmen stormed a Kenyan university campus and seized hostages. The country's president has responded by ordering that the recruitment of police officers be fast-tracked. 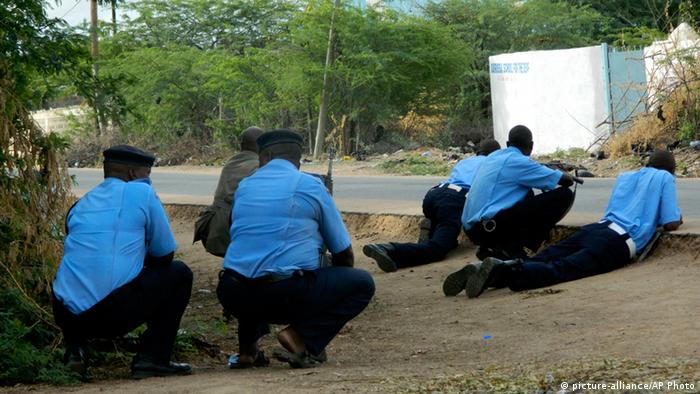 In a statement, Kenya's Interior Minister Joseph Nkaiserry said at least 70 students had been massacred by Somalia-based Islamist militant group al-Shabab on Thursday.

Nkaiserry said most of the threat from the militants had been eliminated, with four of the assailants shot dead. "We are mopping up the area," he said.

Earlier, Kenyan President Uhuru Kenyatta had gone on national television to deliver a brief address, several hours after the gunmen launched their assault on the university in the northeastern town of Garissa on Thursday.

"I am saddened to inform the nation that early today, terrorists attacked Garissa University College killed and wounded several people and have taken others hostage," President Kenyatta said.

Noting that Kenya had "suffered unnecessarily due to the shortage of security personnel," Kenyatta also announced that he had ordered the country's police chief to fast-track the recruitment and training of 10,000 new officers.

Dozens of others were wounded in the assault, for which al-Shabab has claimed responsibility.

An unknown number of gunmen gained access to the university by using grenades to blast open the gates of the campus in the pre-dawn hours of Thursday.

The country's police chief, Joseph Boinet, said the gunmen had fired "indiscriminately" as they stormed the campus while students were still asleep in their dormitories.

"Police... engaged the gunmen in a fierce shootout, however the attackers retreated and gained entry into one of the hostels," he said, adding that reinforcements had arrived at the campus and were "flushing out the gunmen."

The Kenyan Red Cross, which is leading the medical response, said that an unknown number of students were being held hostage.

This was confirmed by al-Shabab military spokesman Sheikh Abdiasis Abu Musab, who told the Reuters news agency that their fighters were holding a number of Christian hostages.

"We sorted people out and released the Muslims," he said. "Fighting still goes on inside the college."

Al-Shabab has pledged to punish Kenya for contributing troops to an African Union force fighting the militants in Somalia. The Islamist group also claimed responsibility for a deadly attack on the Westgate shopping mall in Nairobi in 2013.

Four men charged in connection with the Westgate shopping mall massacre in September have appeared in court in Nairobi. Separately, it is being claimed that one of the gunmen once lived in a Kenyan refugee camp. (11.11.2013)

In a new video, Somalia-based terror group al-Shabab has threatened Western shopping centers including one of the largest malls in the the US. Homeland Security Secretary Jeh Johnson is taking the threat "seriously." (23.02.2015)