The collection was expected to raise only $1 million dollars (€860,000), with the proceeds intended to fund a good cause — the Lesbian, Gay, Bisexual & Transgender Community Center of New York (The Center), where Haring, who was openly gay, did one of his last large-scale murals in 1989 to commemorate the 20th anniversary of the Stonewall Riots.

The items, ranging from watches to prints, were donated by the Keith Haring Foundation, which the artist founded shortly before his death. The online auction, titled Dear Keith: Works from the Personal Collection of Keith Haring, commemorated the 30th anniversary of the famed street artist's death of AIDS/HIV-related causes in 1990. The sale took place online from September 24 until October 1, 2020, and could be viewed on exhibition in New York City on September 26. 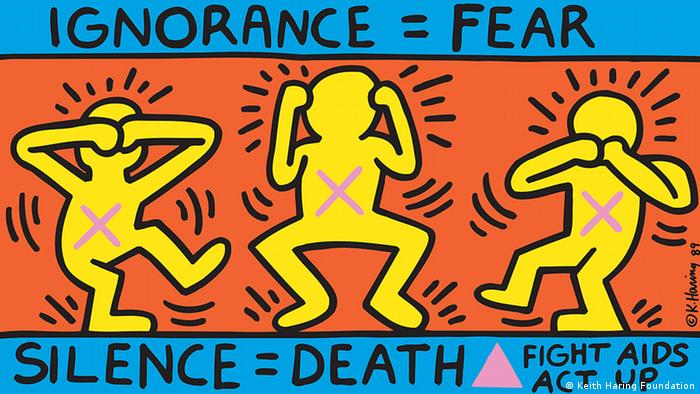 As a child growing up Reading, Pennsylvania, Haring could often be found drawing cartoons inspired by Walt Disney characters. But it wasn't until he moved to New York City in 1978 to study painting at the School of Visual Arts (SVA) and met artist pals such as Jean-Michel Basquiat that his career began to take off.

Although not considering himself a graffiti artist as such, Haring wanted his work to reach the public. Those riding the subway in 1980s downtown Manhattan were likely to recognize his signature outlines of people and animals, which were done on train carriages or station walls. Later, he created many large-scale murals outdoors, often funded as commissions. 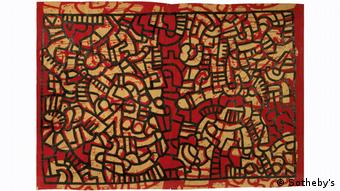 Today, his colorful works are part of the visual language of the USA in the 1980s. Haring's illustrations often incorporated political themes, and as the AIDS epidemic grew to epic proportions in NYC in the 80s — affecting many in his own circle — his work often advocated for safe sex.

He sometimes drew suggestive figures to raise awareness about the AIDS epidemic, which US president Ronald Reagan didn't publicly acknowledge until 1985 after thousands had already died.

"An artist is a spokesman for a society at any given point in history. His language is determined by his perception of the world we all live in. He is a medium between 'what is' and 'what could be'," said Haring.

As part of a wide circle of artists, Haring was gifted or traded many of the pieces that are now up for auction.

"The collection is remarkably autobiographical, just as any great collector’s estate is a window into their individual perspective" wrote Harrison Tenzer, Head of Sotheby's Contemporary Art Online Sales in New York, of the auction. "We see the progression of Keith’s life captured in these works, from those of his childhood friend Kermit Oswald, to SVA (School of Visual Arts) peers John Sex and Kenny Scharf, to fellow upstart Jean-Michel Basquiat, to graffiti writers Futura 2000 and Lee Quiñones, to his heroes Andy Warhol, Pierre Alechinsky and William Burroughs, who he collaborated with during his meteoric rise to fame."

A print of an American flag by pop art superstar Roy Lichtenstein titled "Forms in Space" was among the items that went under the digital hammer. One of Haring's favorites, the print hung above his fireplace for years.

Tenzer says the collection ultimately represents "a culturally fertile era in which artists and activists worked closely together to create a world that was more inclusive than the one they were born into." 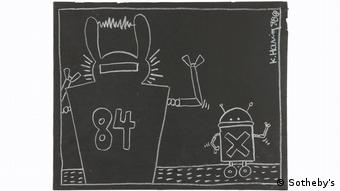 As a child, Haring was inspired by cartoons

Many of the pieces in the Sotheby's sale were created by artists associated with Club 57, a queer club Haring and his friends frequented in the basement of an East Village church. The former house of God famously hosted all-night parties in the 1970s and 80s.

While some works started at just $100 (€85) in an effort by the auction house to "present collecting opportunities at all levels," others were entirely out of budget for the average buyer. A striking Warhol print of Haring and his partner and lover Juan Dubose, who passed away from AIDS in 1988, opened on the auction floor at $250,000 (€214,600). 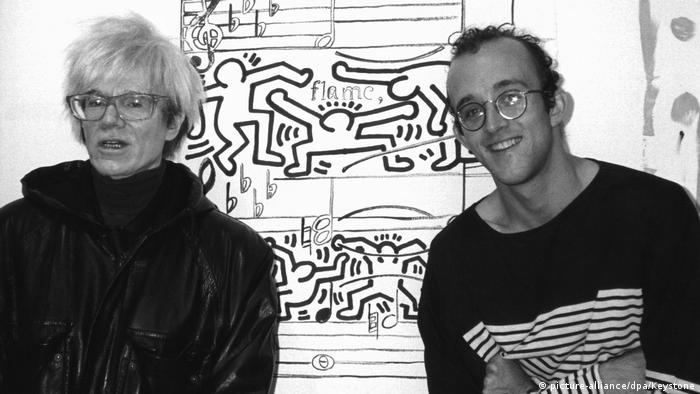 The auction came at an apt time for the Lesbian, Gay, Bisexual & Transgender Community Center: as the New York Times reported last month, it's down $5.4 million (€4.6 million) in revenue due to the coronavirus pandemic, while experiencing a 40% increase in requests for their services, such as mental health counseling and substance abuse treatment.