Kashmir′s female athletes kick down barriers to coach girls | Asia | An in-depth look at news from across the continent | DW | 20.09.2021

In Muslim-majority Kashmir, female athletics is often frowned upon. DW spoke with women who are breaking taboos and teaching girls the value of committing to sports. 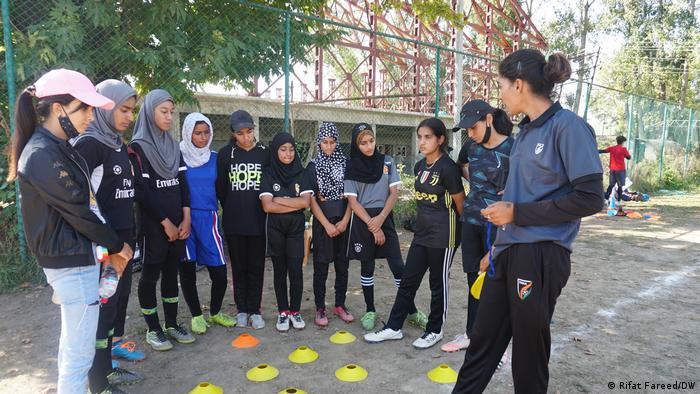 It is a sunny afternoon on a football pitch in Indian-administered Kashmir's largest city, Srinagar. Girls wearing hijabs and uniforms are running laps to warm up for practice.

Nadiya Nighat is their coach, and she says playing football teaches the girls discipline.

"I want to make them tough and punctual. I want to teach them the importance of being on time in sports," Nighat says, as she calls out two girls for being 20 minutes late.

In conservative Muslim-majority Kashmir, pursuing a career in athletics is a difficult choice for many women to make. Nighat has encountered many obstacles along her way.

At the age of 11, Nighat said she played football with the boys in her town. At times, she was beaten and stigmatized by her family and neighbors for playing a game "not meant for women."

Indian women fight for equality in the labor market

"My family did not like the idea of a career in football initially," Nighat told DW. "They would tell me to do something else."

Nighat had played on teams and earned accolades in several Indian states before opting to become a football coach. Nighat said she thought about giving up on her dream many times in her career.

"Once, I was playing in a tournament with the boys' team, and I was spotted after three matches and was told that I would be banned," she said.

"I was very disheartened. I thought, maybe it's over for me. I was forced to play with boys because there were no girls," said Nighat. But her coach encouraged her to keep playing, she added.

Nighat said her family and neighbors took convincing that women could participate in sports.

"Our neighbors would talk about me and tell my mother not to allow me to play with boys. But now, after my work got recognition, they support me," she said.

However, despite her own success, Nighat is aware playing sports continues to be a tough choice for women in Kashmir.

"Football – my other life"

"I had many friends who would play football, but due to family pressure, they quit. Some girls would come to the field without letting their families know," she said.

An athletic role model for girls

Nighat has been running a training facility for six years and encourages girls to become involved with athletics.

"I am just trying to help young people and mostly young girls. The local football association is helping me. In Kashmir, I feel it's important to be a coach because girls find it hard to get training," she said.

"Some girls travel 40 kilometers (25 miles) every day to practice. It motivates me that I am doing something worthwhile. I might be helping them to realize their dream," she said.

"In my village in central Kashmir, I used to go with my brother to play, but there were no girls. I was practicing alone," Muzaffar told DW. "I found out about this academy for girls on social media and joined," she added.

Shaheena, a mother who accompanies her young daughter to Nighat's football training, spends hours out of her day attending her daughter's training sessions. 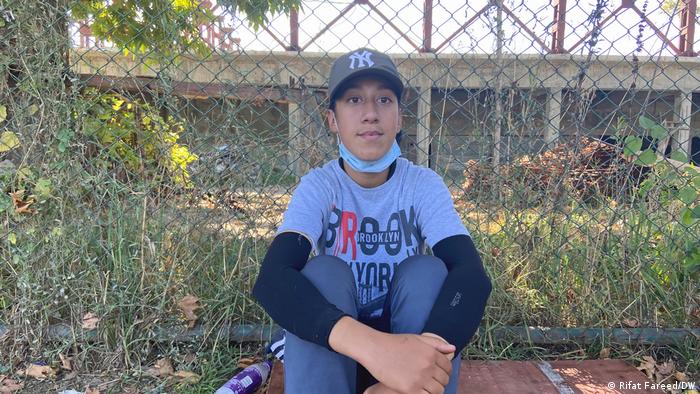 "I know that most mothers do not want their daughters to make a career in sports," she told DW. "But I want my daughter to explore the possibilities of becoming a footballer," she said.

Nighat said she plans to acquire a top-level license for football coaches in India.

"It is still a struggle for me; when a woman starts something, there are so many forces to stop her," she said. "It's a struggle for girls; some parents give support, but most of the time you face a lot of opposition," she added.

And the struggle for women athletes in Kashmir isn't limited to football. Jasiya Akhtar comes from a small village and made a name for herself playing cricket.

"I would leave home early in a local bus to practice where men practiced in our district. There was no concept of women playing. Everyone laughed at me," she said.

But Akhtar's perseverance paid off, and she ended up representing India's junior women's cricket team and has played in India's Premier League. She currently plays for a team in India's northern state of Rajasthan. 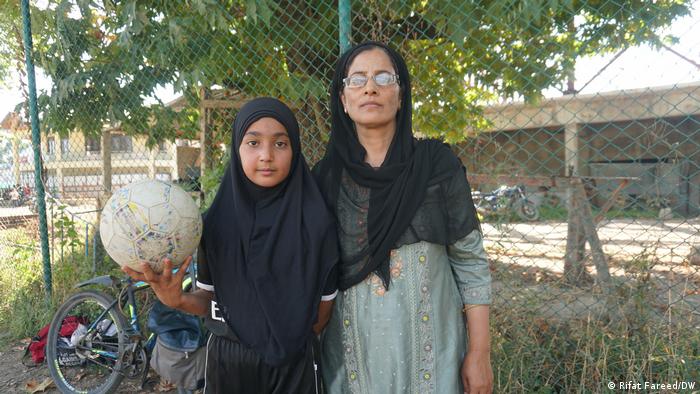 "I became the first woman cricketer from Kashmir to be selected for the Indian women's national cricket team," she told DW.

"I had no financial support, but I always thought if I wait for the right shoes, then my journey would be stuck waiting. Instead, I started practicing in the same sandals that I had. I followed my passion and did not pay heed to those who told me that there is no career for women in cricket," she said.

In her home district, Akhtar is planning to start a cricket academy to train young girls in southern Kashmir.

"I know there are thousands of women who have a passion for playing cricket. But some are held back by fear, some by their families, some by society and most of them by the lack of opportunity," she said.

"I was at a bookstore yesterday, and three young girls said that they wanted to play like me. I was very happy to see them and offer them help in my upcoming academy," Akhtar said.

Women in Kashmir's nomadic tribal communities are often married as teenagers and end up having multiple children they can't support, as their husbands forbid access to birth control.