COVID: Kashmir volunteers step up as health system suffers | Asia | An in-depth look at news from across the continent | DW | 04.05.2021

Volunteers are taking on an overwhelming number of requests for oxygen cylinders and critical medications. The region recently imposed a full lockdown, and is managing a shortage in ICU beds. 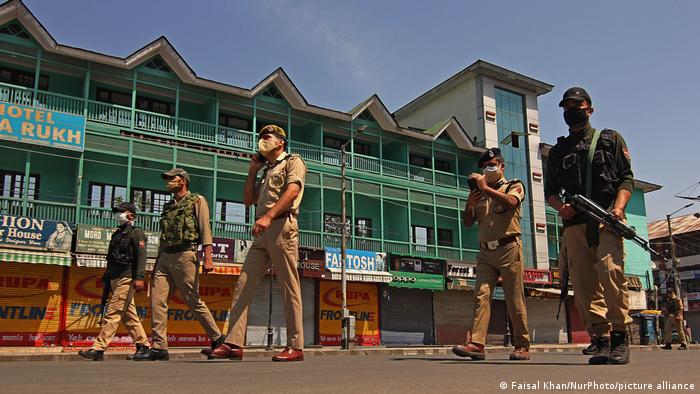 When the pandemic first struck India-administered Kashmir in March 2020, Bashir Ahmad Nadvi, the head of NGO Athrout Kashmir, saw people alone in quarantine centers and hospital wards struggling for food, as their families and friends stayed away due to fear.

In response, volunteers from his organization, based in the main city of Srinagar, started reaching out to patients with food, medicine and other necessary aid.

Now, as the second wave of infections aggressively sweeps across India, the number of cases is increasing rapidly in Kashmir as well. The region recorded 51 deaths on Monday alone.

On average, Kashmir has recorded around 3,000 new cases every day for the past week. Following the rise in infections, regional authorities imposed a one-week lockdown, shutting everything down except for essential services.

As hospitals remain overcrowded with patients, volunteers and NGOs are dealing with an overwhelming number of requests for oxygen and medication needed for critical care.

Nadvi says his organization, which is made up of 35 volunteers, is working around the clock to reach those suffering from COVID, as desperate calls for help keep coming in.

His organization has donated six ventilators to hospitals in the disputed region, where development in the health sector has stagnated due to the decades-old conflict.

"We used four vans to make public announcements about the virus and encourage people to stay home and wear masks," he said.

What worries observers and activists even more, however, is the lack of proper healthcare infrastructure in the region. A 2018 report issued by Kashmir's health department showed that the number of medical staff was not enough to sufficiently run its health institutions.

"[Kashmir] is severely short of nursing staff. Against a requirement of 3,193 nurses … there are only 1,290 sanctioned posts of staff nurses in the [former] Jammu and Kashmir state, with a deficit of 1,903 posts which need to be created," the report said.

The report revealed that the doctor-to-patient ratio in the Kashmir region is also one of the lowest in India.

Additionally, officials said that there are only 600 ventilators available for the region's population of nearly 11 million people. Srinagar, which is home to 1.4 million people, is also seeing a shortage in oxygen cylinders.

"The situation is very bad. The virus is spreading rapidly," Nadvi said. "Almost all of our oxygen machines are with patients. We have mini ventilators and they are also with patients. Seeing the surge in cases, we have now ordered 100 more machines and oxygen cylinders," he said.

He added that the organization also established a space to provide oxygen and beds to critically ill patients if they fail to get a hospital bed in time.

A few kilometers away from Nadvi's office, volunteers at another agency, the Social Reforms Organization (SRO), have been busy taking calls from the desperate kin of patients looking for oxygen support.

"We get 100-300 calls every day and most of them are for oxygen," said Javaid Ahmad Dar, the chairman of the organization.

"Last year, people did not need much oxygen. They needed food and we provided monthly ration packs to 1,700 families for a month," he told DW, adding that they are trying their best.

"Sometimes the oxygen supplies get depleted, then we coordinate with other organizations," said Dar.

His organization also established a community graveyard for people who were either abandoned by their families or who died far away from their homes.

"Our volunteers bury those who do not have a relative or friend to do it for them," Dar said.

The region's Sikh community is also at the forefront of helping people with food and cremations, while Sikh doctors are helping out by providing online consultations. The community has formed a "COVID Volunteers Group" that is helping people of all faiths.

Although his family worries about a possible infection, Harmeet Singh, 40, is committed to his volunteer work of providing food to attendants and patients in hospitals.

"When I return home, my two daughters run to me but I stop them, I don't want to put them at risk. It is risky work, but service to humanity is at the core of our religion," says Singh, who lives in Srinagar.

He has also helped with cremations, which can be an emotionally difficult process for him.

"Last week, a husband and wife died within three days [of each other]. The whole family was COVID positive. When we found out about it, we rushed to cremate them following the protocol. It can be very difficult at times," he said.

Singh says the community is also planning to open their gurdwaras, or temples, for COVID care.

'We have to choose who will live'

Salim Khan, the head of the Social and Preventive Medicine Department at the Government Medical College Srinagar, said there has been an exponential rise in COVID cases across Jammu and Kashmir.

"The virus is affecting all age groups, whereas last year, the elderly and people with comorbidities were the most affected," he said. "The rate of mortality is higher this year." Speaking to DW on the condition of anonymity, another health official said that all of the ICU beds in the region are occupied by patients.

"We sometimes have to choose who will live because there are no ICU beds," he said.

There are currently over 22,000 active coronavirus cases in Kashmir and over 1,000 of those patients are hospitalized.